Lack of escalator etiquette can slow down movement

Some people understand to stand on the right of an escalator, others don’t. (Image: Kathryn Reed)

One of the benefits of riding an escalator is to get someplace faster than walking stationary stairs.

But what if you want to walk on the escalator? How often has that desire been thwarted by people blocking your forward progress?

OK, so escalator etiquette is not one of those things you have thought about much. Most of us aren’t on an escalator that often. But there are plenty of places where these people movers exist—airports, malls, ballparks, hotels—so they can be part of one’s life on a somewhat regular basis.

I was taught that when riding an escalator you should stand on the right side, while those who want to walk on the moving stairs should use the left side.

When people stand on both sides it can impede forward progress for those who want to go faster for whatever reason—they are running late, they want a little exercise, they don’t want to be confined next to other people, whatever the case may be. 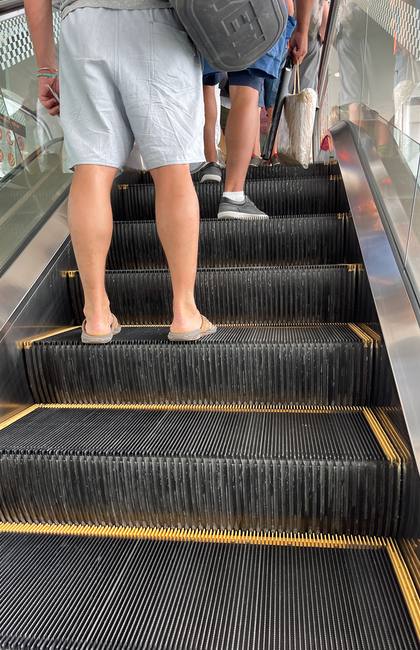 It can be hard to get ahead on an escalator when etiquette is not followed. (Image: Kathryn Reed)

My escalator riding is rare. It happened when I flew in June and again this month when I was at a mall. Wow, people don’t know escalator etiquette. I didn’t want to educate anyone, I just politely said “may I pass you” more as a statement than a question. I thought about saying “on your left” like you do on a walking/cycling path as you pass someone, but thought that would sound a little odd.

People looked at me like I was cutting in line. I was taken aback a bit. Fortunately, I wasn’t in a hurry, but I didn’t want to just stand. Not everyone moved. When they did it was with a bit of attitude. Nonetheless, I thanked them and moved on.

But the experiences left me wondering if I should have explained to these obstructionists that there is actually an etiquette to riding an escalator. Maybe it was a teaching moment that I missed.

On the flip side, there are those who believe everyone will get to the top or bottom faster if people stood side by side instead of leaving one side open that isn’t well used. I can see the logic in this when the escalator is full. But if there are enough people who want to walk, then let us walk.

Most of the Florida homes in the path of Hurricane Ian lack flood insurance, posing a major challenge to rebuilding efforts, new data shows. Without the expensive coverage, homeowners are left to rely on either savings, loans or charity. https://nyti.ms/3Ci1Fug