‘Maverick’ perfect film to get people back in theaters

Top Gun has been one of my “pick me up” movies ever since it was released in 1986 when I was in college.

The energy, the action, the music, the angst, the strife, the love, the competition, the friendship, the heartache, the camaraderie. It had it all. 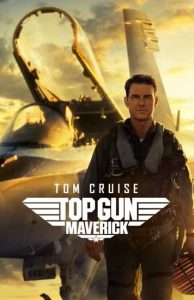 Say what you want about Tom Cruise, but he was stellar in his performance of fighter pilot Pete “Maverick” Mitchell the first time and hasn’t lost a step in the sequel. He has resurrected the role for Top Gun: Maverick that was released in May.

There were so many reasons I wanted to see this movie. It took me back to much younger days, it was partially filmed in South Lake Tahoe and Meyers in December 2018, and this was my inaugural return to a theater since the pandemic closed theaters.

Mom had seen it a few days before we went together. We opted to go to the XD showing. This stands for extreme digital. The screen is bigger and curves at the sides, and mom says the picture is crisper.

All I can say is the flying scenes were dramatic on such a large screen. I had forgotten how a movie theater really is the place to see certain films. We have a decent size TV, but it is nothing like being in a theater.

I liked being able to buy our tickets in advance, which meant choosing our seats. In fact, we waited a day to be able to get ones we really wanted. This meant not having to be in the middle surrounded by people. Yep, still being COVID safe. We might have been the only two in the theater wearing masks.

As for the Tahoe footage, that is Washoe Meadows State Park in Meyers that Cruise, um, Maverick, is running through.

Lake Tahoe Airport in South Lake Tahoe was also integral to the film. It was made to look like a military base even though actual bases were also used.

“We needed a mountaintop that overlooked the airport,” location manager Mike Fantasia told SF Gate. “You don’t have mountains close to most airports, but it just so happened there’s a couple of knobs of rock sticking up, called Twin Peaks, that are just sitting south and west of the airport.”