Why celebrate the Fourth of July with fireworks? The founding fathers and their contemporaries would have to answer that question.

This is because on the first anniversary of the signing of the Declaration of Independence—July 4, 1777—the party in Philadelphia included pyrotechnics. (Philly was where the First Continental Congress met.) Ever since then fireworks have been part of July 4th celebrations in so many U.S. cities—big and small.

The colorful displays we see today are rooted in human exploration from thousands of years ago. 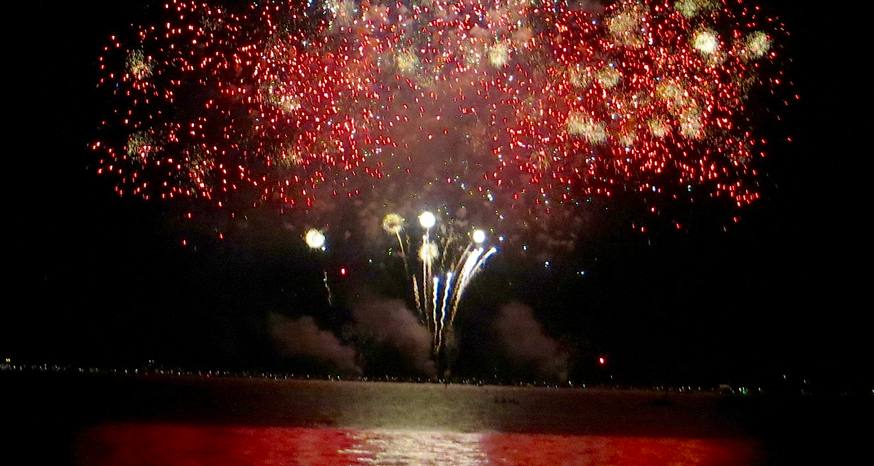 Fireworks on the South Shore of Lake Tahoe have been named some of the best in the U.S. (Image: Howie Nave)

According to the American Pyrotechnics Association, “Many historians believe that fireworks originally were developed in the second century B.C. in ancient Liuyang, China. It is believed that the first natural ‘firecrackers’ were bamboo stalks that when thrown in a fire, would explode with a bang because of the overheating of the hollow air pockets in the bamboo.” The Chinese hoped they would keep evil spirits away.

The APA’s website goes on to say, “Sometime during the period 600-900 AD, legend has it that a Chinese alchemist mixed potassium nitrate, sulfur and charcoal to produce a black, flaky powder—the first ‘gunpowder.’ This powder was poured into hallowed out bamboo sticks and later stiff paper tubes forming the first man-made fireworks.”

I used to love fireworks. Not so much anymore. The threat of fire and the noise are the main reasons. For cities it’s a huge expense.

In 2015, it cost more than $100,000 for the fireworks display on the South Shore of Lake Tahoe. The thinking is the fireworks bring people to the area so the visitors bureau saw it as money well spent. This year others are taking on the responsibility and funding.

With how dry the West and other parts of the country are, it would seem like fireworks should be banned.

When I was just in Tahoe there was a huge display in Stateline on June 22 that I could see from the place I was staying. The first bangs made me think it was gunshots so I started counting in order to relay the info to authorities if need be. Then the noise changed, and I knew it was fireworks. First thought was this was some yahoo tourist bringing fireworks to the Tahoe basin. (The only legal fireworks in Tahoe are sanctioned events.) This was a full-on display, not something one buys on a stand on their way to Tahoe.

I’m just glad my ancient dog’s hearing isn’t good. She used to freak out by noise like this. This time she slept through it.

I didn’t bother to keep watching the fireworks; instead I was just bothered by it.

Fire scares me. An errant spark in any town could be devastating. Then there is the garbage. To think of all that crap that lands in Tahoe. A lawsuit a few years back sent the fireworks to the Nevada side of the South Shore where environmental rules are less stringent than in California.

Maybe it’s time to find another way to celebrate the Fourth and other events without fireworks—at least during a drought.