Microtransit a growing component of transportation in Tahoe area

Getting people out of their personal vehicles has been a challenge for transportation officials in the greater Lake Tahoe area for decades. Today, a more concerted effort is under way to use microtransit to help alleviate congestion, and get locals and tourists to their destinations.

Microtransit is on-demand service. Lyft and Uber are part of this in a greater sense. Rented bikes and scooters, hotel shuttles, as well as the bus system Heavenly Mountain Resort employs are all microtransit options. Another component is private companies operating in a distinct area, such as Downtowner in the Squaw Valley area for the last two winters. These types of firms use SUVs, vans and the like to transport people. Users access the vehicles via an app.

Tahoe Regional Planning Agency official are working on updating the Regional Transportation Plan, which is done every four years. The last one was approved in 2017. It’s a blueprint for the next 25 years. This will be the first RTP where microtransit is a component of the plan.

On May 18 in the fifth and last webinar sponsored by TRPA microtransit was the focus. Darcie Goodman Collins, executive director of the League to Save Lake Tahoe, moderated the talk. Participants were Gavin Feiger, the League’s senior policy analyst; Steve Murray, CEO of Downtowner/Mountaineer; Jonathan Hopkins, director of strategic development for Lime; and Kira Smith, TRPA associate transportation planner. League officials are concerned mostly about the environmental benefits of transit considering vehicles are the largest contributor to sediment clouding Lake Tahoe. 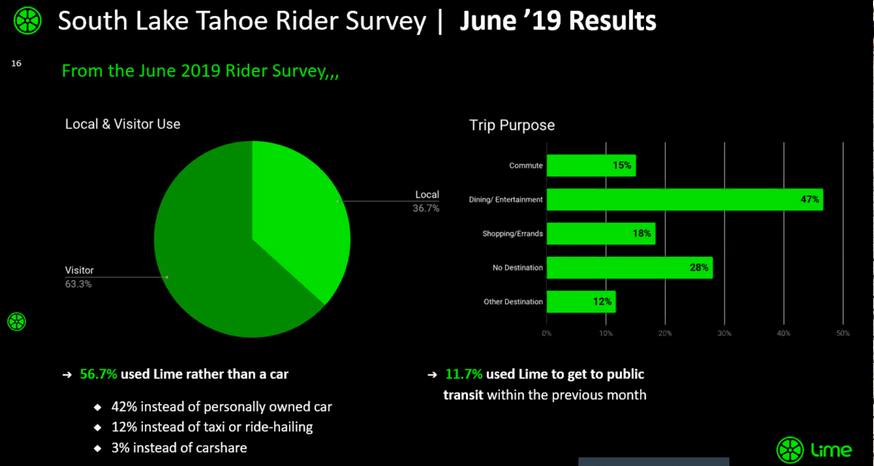 During the webinar a quote published in the Washington Post by Ashish Kabra, a professor at the University of Maryland School of Business who studies shared transportation, was posted: “Given the choices we have, [bikes and scooters] seem to be the much safer modes of transportation. You are able to social distance yourself and still have a means to get to where you need to get to without a car.” In this pandemic era, getting on transit of any sort may not be something people want to do if they have a choice. Cleaning, social distancing—these are now things all transit operators are having to deal with. Free transit or paying via an app at least eliminates the exchange of money, which is super dirty.

It was pointed out that if parking remains free there is less incentive to get out of a vehicle. Participants said a managed parking program has to tie into transit.

Heavenly’s transit program has been evolving through the years. In the early 1980s the ski resort had its own transportation department. Then it partnered with the city in the mid-1990s when the city ran buses. Then it partnered with Tahoe Transportation District, but TTD later said no to winter shuttles. Heavenly buses service workforce housing units as well as its four base locations through a system called bump and go. They are flexible shuttles. The internal system knows when one bus is full and takes off, so another will be right behind it. This keeps the passenger flow moving.

All experts said technology is improving how they deliver service.

“It’s a new world where transit works with people’s lives,” Murray, with Downtowner, said. He said the goal is to have “people think outside the personal car.”

Accessibility and frequency are the two things officials said are needed to make all transit user-friendly. At the end of the talk each panelist was asked what they would like to see in the Tahoe-Truckee area by the end of 2021 if funding and other obstacles were not in the way. Answers included: more choices, more cohesion, dedicated lanes for buses and shuttles, free transit forever, protective bike lanes, better marketing of the plans that exist, more pilot projects, and higher frequency.

Fractured routes has long been a complaint by users and would-be users of public transit, especially on the South Shore where routes are at a bare minimum and don’t even go to Meyers. As one webinar participant pointed out: Going from South Lake Tahoe to Round Hill entails driving to Al Tahoe, parking, and then catching a bus. Feiger said there is nothing in the RTP or Tahoe Transportation District’s master plan to make that trip easier. For those wanting to get to Round Hill Pines recreation area in the summer the concessionaire must provide a shuttle from the Stateline casino corridor. That doesn’t help those who want to get to the shopping center or other locations in that area.

It’s possible microtransit could fill in the gaps. That service would get the riders to the main bus lines. For all of this to work, though, a seamless, interconnected platform is needed for users so they aren’t dealing with multiple agencies’ websites or apps. The South Shore had Chariot as a microtransit operator a couple years ago as a pilot program. The company is out of business now. Part of the Stateline event center approval is that microtransit must be offered. According to Collins, “It will start out seasonally in the first couple of years during the summer and over winter holidays, and then will move to year round by year three.”

For those looking at regional transit, it’s even worse. Greyhound used to serve the South Shore. Now travelers can access the once-a-day Amtrak bus that stops at the transit center at the Y. The train still regularly comes through Truckee.