Beer and skiing are two things that go well together. Stopping for a beer with friends on a sunny day was an ideal break. Or maybe it was consumed post-skiing in the hot tub.

However, it wasn’t until this ski season that I paid attention to the U.S. Ski & Snowboard teams having an official beer sponsor. It’s Pacifico. While the beer is still made in Mazatlán, Mexico, it is owned by behemoth Constellation Brands. 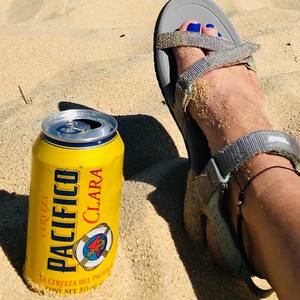 Prior to Pacifico’s sponsorship, Lagunitas Brewery in Petaluma was the beer of choice.

The Pacifico deal is good just for the 2022-23 season. The original deal with Pacifico started in 2019 and was to last through the Winter Olympics earlier this year.

This makes me wonder what is really going on. A one-year sponsorship deal isn’t much. So, who wanted what and who said no? Is a longer deal in the work or will another beer take over?

Pacifico’s website says snowboarding sensation Jamie Anderson is one of its athletes. That means she is most likely making money directly from the company. This 2021 video has the Lake Tahoe resident talking about what is important to her—all about eating correctly, yoga and those sorts of things. Everything she said and what I know about Anderson makes me believe a Pacifico has probably never touched her lips. Not once in the video does she mention drinking alcohol nor is she seen consuming any. But Pacifico is in her fridge; though she grabs something green. The beer is out on the back deck as she does yoga.

I often wonder about truth in advertising, in sponsorships, and in endorsements of products. Maybe that’s why I don’t buy products because a celebrity is pushing it. Does that person even use the product they are getting paid to endorse?

I wonder if the money is worth selling something you don’t use, you don’t believe in. I don’t know if Anderson did this, but we know others have and will continue to. It seems selfish to lie to your fans—whether you are a sports star, a movie star, a politician or someone else with influence.

Be authentic. Promote what you believe.