Saying goodbye to friends, the mountains and desert 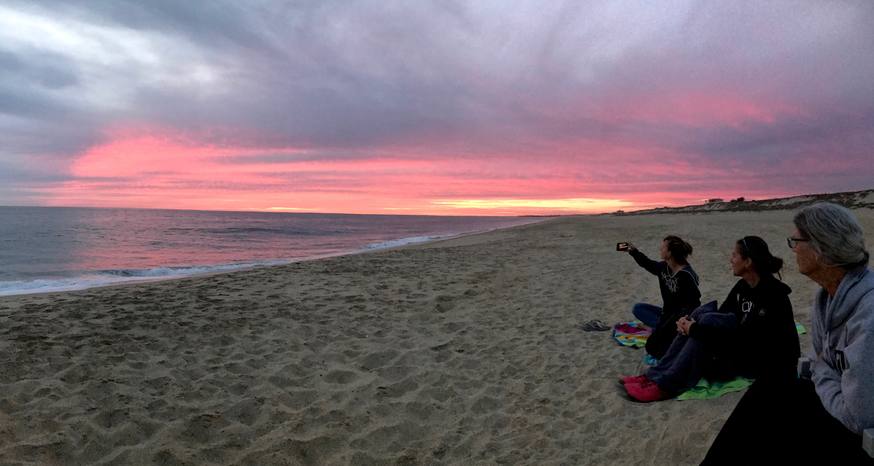 Sharing a final sunset on the beach in Todos Santos with Laurel, Kerrie and Jill. (Image: Kathryn Reed)

I’ve never said so many goodbyes in such a short amount of time.

While one friend appropriately described my leaving Baja as driving into my future, the other part of the sentiment is that I was leaving something behind.

This third time to leave Todos Santos was definitely more permanent. I’ll be back, but not for a winter, at least not anytime soon. 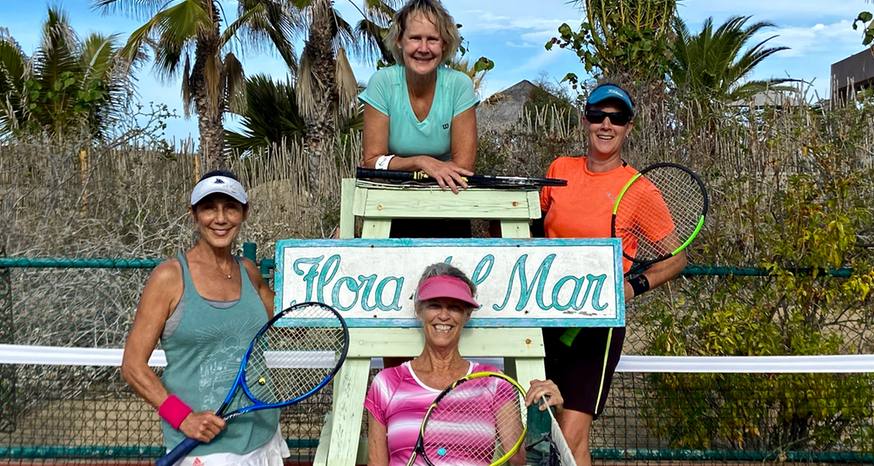 I knew this saying goodbye thing was going to be difficult when I got teary-eyed telling Tony, the guy who delivered my pesos for writing for the Gringo Gazette, that I would not be coming back. He isn’t a friend, he’s not my editor, he’s just someone who always had a smile for me. Someone who was genuinely kind. Someone I will likely never see again in my entire life. He was also my first goodbye.

Tears fill my eyes now. The computer is a blur. I need a tissue.

The sadness is mixed with so much joy. The sadness isn’t just leaving Baja, my friends and the life I created there. I’m also leaving Tahoe. How often does one move entail leaving two places? Two sets of friends? Two ways of life? 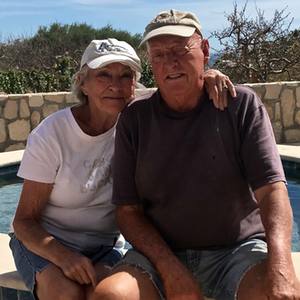 I’m happy about the move I made; it was my idea after all. Those details will be in another story. This is about my goodbyes, which because of my decision to move means I brought all of this on myself. The sadness is also a testament to the importance the people and places are to me.

The last 10 days in Todos Santos the social calendar suddenly became full. We all knew I wasn’t just leaving for the summer. JR told me he hoped he’d see me on a court again as he walked me to the gate. I wanted to hug him goodbye. Hugs during a pandemic, though, are frowned upon. I spent a couple hours talking to him and his wife, Geri, after we played mixed doubles that Friday. It was normal and relaxed. I know we’ll find ourselves on another tennis court somewhere in the world.

Anne and Ray didn’t know I was in escrow on a house in Northern California when we met for our final breakfast. They became friends after staying as Airbnb guests at my sister’s place in Todos Santos the previous winter. I don’t know when our paths will cross. They are travelers, so perhaps their van will make it to my driveway. 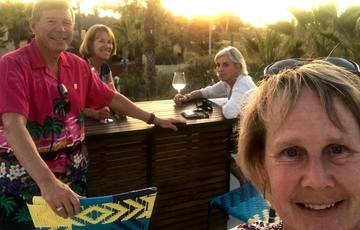 Knowing March was going to be chaotic I asked some of my Tahoe tennis friends who I’d been Zooming with while in Baja if we could have another session before I headed north. I didn’t know when we would all be on the same screen again, let alone see one another in person. They will be easier to rendezvous with than my Baja friends just because of proximity. Our lives are already complicated with only one of the six actually in Tahoe for the winter. Still, I needed to see them together before I embarked on my next adventure.

Dinner at Tim and Susan’s was bittersweet. For two winters I lived across the street from them. This last winter I was with friends in Todos Santos instead of at my sister’s. I was so used to seeing Tim and Susan on a regular basis. This season we gathered twice. Damn COVID. They were the best neighbors I could have asked for; and friends who will be there when I return. 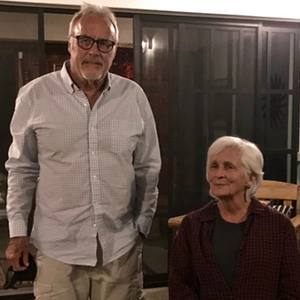 Tim and Susan are the best neighbors anyone could want. (Image: Kathryn Reed)

Scott and Gail are two of the genuinely nicest people I’ve ever met. Something about tennis people, I guess. Libations and the sunset sinking over the Pacific, dinner and conversation, fire pit and more talk. I couldn’t answer when I’d return.

I don’t know—it’s what I kept saying when people asked when I would be back. As long as AJ is alive, I don’t expect to fly anywhere because I no longer want to leave her with anyone. As long as my mom is alive, I can’t imagine wintering again out of the country.

A trip to Cabo was made to say farewell to Joyce and Ron. Their Bella is aging just like AJ, so not sure we’ll be seeing our respective dogs again. But the humans, we are bound to rendezvous in Baja or Tahoe.

The hardest Baja goodbye was with Jill. She and Robert, along with their dogs Rubi and Pepper, opened their casita to me for more than four months. In that time we became even better friends. A big hug goodbye. Then tears filled my eyes and words were useless.

There were so many goodbyes on the tennis court—mostly in Baja, but one last day in Tahoe, too. 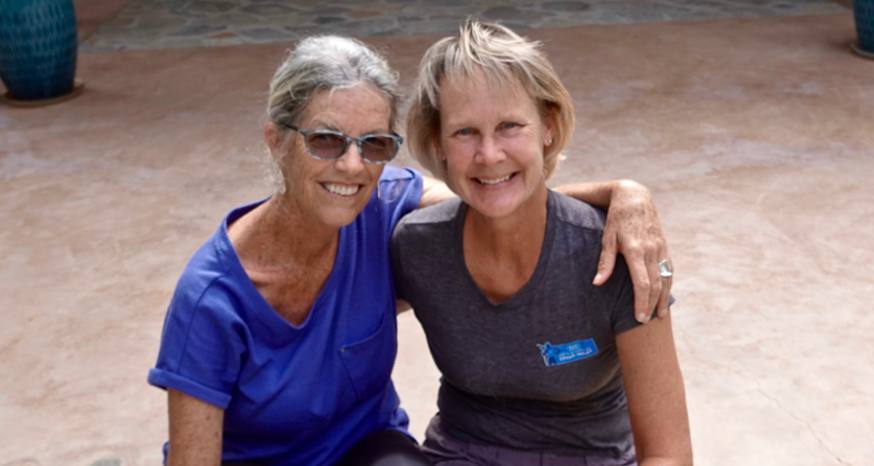 Jill and Kathryn spent many hours while walking dogs and drinking wine discussing serious and not so serious topics. (Image: Robert Bland)

With Carolyn and Bob now wintering in the Palm Springs area, I was able to see them outside of a Zoom call for lunch as I drove north.

I was in Tahoe less than a week before arriving at my final destination. Rosemary and I walked through her neighborhood trying to stay in the sun and keep me off the ice; Baja made me a little soft! Joyce was wonderful in arranging a few hours of tennis in the Carson Valley. I got a little front porch catch-up time in with Denise and Steve before the cold sent us in search of warmth. Sue, well, she again welcomed me and AJ into her warm home and hot tub, poured wine and put up with my scatteredness as I prepped for my transition.

So many friends have offered a place for me to stay when I visit. And I look forward to welcoming them to my new home as well as meeting someplace to share new experiences.

While you may not have been mentioned here, all of my friends mean the world to me. All of you are as vital to me as oxygen and water.