Scientist on crusade to save Mexico’s sea turtles

Turtles caught in fishing nets are tossed aside to become food for creatures in the sea. They are byproducts of an industry that can be cruel.

Stephanie Rousso, who is a wildlife biologist, marine scientist and spatial ecologist, is one of many who are working to make life better for sea turtles by partnering with fisheries and educating the general public. On Feb. 14, she gave a talk at Paleta’s restaurant in Todos Santos. 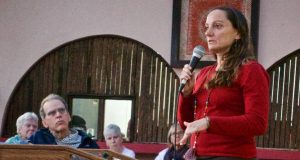 Stephanie Rousso on Feb. 14 talks about the preservation of sea turtles in Mexico. (Image: Kathryn Reed)

She praised the chef for knowing where the seafood came from, and acknowledged their practices are sustainable. That is one of the things Rousso likes to promote – sustainable actions, which includes consumers being aware of the food they consume. She is an advocate for California’s Monterey Bay Aquarium’s ratings for sustainable seafood consumption.

By eating food from sustainable fisheries people could be helping to save turtles. These fishermen are employing practices that don’t arbitrarily kill turtles. They are also tagging turtles for researchers.

Rousso is working with Upwell Sea Turtles and the Rufford Foundation in her research. She also relies on area fishermen and citizen scientists to provide data. When people report a sea turtle sighting with exact coordinates of its location that information is recorded. From there scientists can delve into the habitat and migration corridors.

“We want dead and live sightings,” Rousso said. Nesting information is gathered by other organizations.

These air breathing reptiles don’t breathe underwater, but they eat underwater. Seven species of sea turtles live throughout the world. Five call the waters of Mexico home. The olive ridley is the most common in the Todos Santos area. Leatherback and green are also in Todos Santos. Others in Mexico are hawksbill and loggerhead.

“(Olive ridley) are the most reproductive. They mate every year,” Rousso said.

While their numbers indicate they could be taken off the endangered species list, according to Rousso, that isn’t going to happen because in Mexico that would mean they could be fished again.

Leatherbacks, though, are not doing as well. Their softshell makes them unique.

“They could go extinct in our lifetime here,” Rousso said. “They are getting caught in nets and dying.” In Costa Rica in the last year only three nests were documented.