Somber. That was the mood of the assembled viewers. How could it have been otherwise?

What we were looking at were 50 photographs taken by Ansel Adams at Manzanar, the World War II concentration camp where people of Japanese descent, most who were U.S. citizens, were sent. 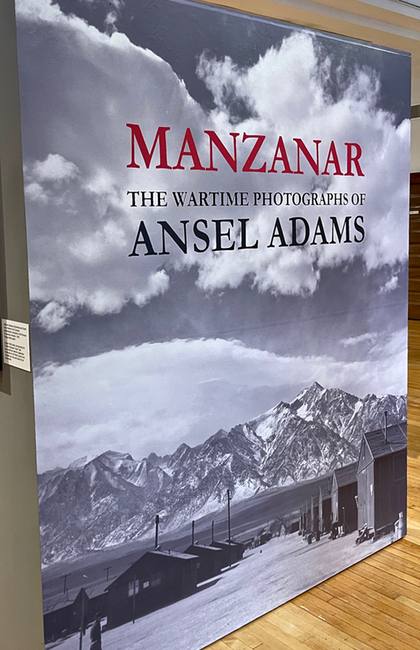 The exhibit at the Museum of Sonoma County in Santa Rosa opened Feb. 19. This date marked the 80th anniversary of President Franklin Roosevelt signing the executive order that mandated these innocent people’s captivity.

From 1942 to 1945 the U.S. opened 10 internment camps to house nearly 120,000 Japanese-Americans. Many lost their homes, vehicles and other belongings during their forced exile. They had committed no crime. They just didn’t look like the white establishment.

It’s another horrific chapter of racism in the United States, that in many ways continues today for Asians.

“Manzanar: The Wartime Photographs of Ansel Adams” is an opportunity to see the people who were kept behind barbed wire. The intensity on some of their faces is gut-wrenching. The ordinariness of the action taking place in many of the photos is startling; showing that these people were resilient as they tried to make the best of a horrific situation.

Adams published the book Born Free and Equal in 1944 after he had visited the concentration camp along Highway 395 in the Owens Valley of California. It was controversial at the time because the war was still raging.

This is what the Library of Congress has on its website when talking about this book: “In a letter to his friend Nancy Newhall, the wife of Beaumont Newhall, curator of photography at the Museum of Modern Art, Adams wrote: ‘Through the pictures the reader will be introduced to perhaps twenty individuals … loyal American citizens who are anxious to get back into the stream of life and contribute to our victory.’”

Today, Manzanar is a National Historic Site which should be visited by everyone. If the exhibit comes to a city near you, go.