Tennis — a lifetime sport that tests the body and mind

“The moment of victory is much too short to live for that and nothing else.” – Martina Navratilova

“I think team sports probably teach you more about giving – about being unselfish and being flexible.” – Chris Evert

“Tennis has a lot to do with your character and your poise, the way you keep your nerves under pressure.” – Boris Becker 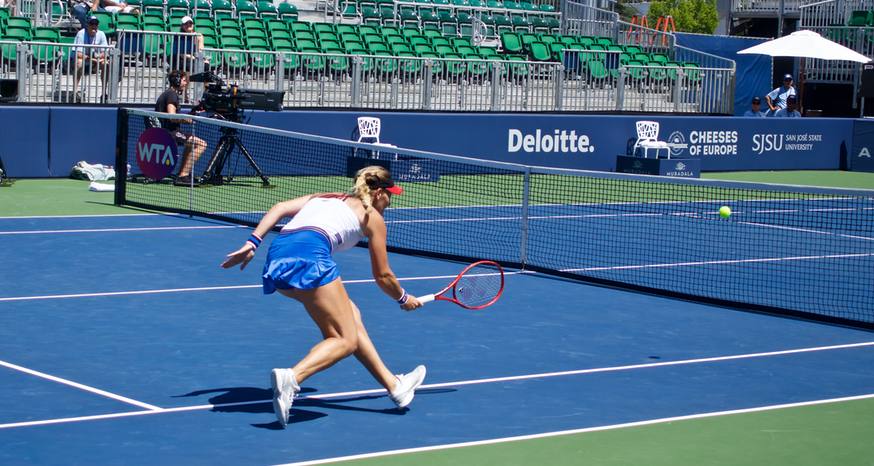 Timae Babos reaches a drop shot to return a winner at the Silicon Valley Classic on July 29. (Image: Kathryn Reed)

Planes soaring overhead. It was reminiscent of Forest Hills, New York, or least what I remember from watching the U.S. Open on TV. It just wasn’t as obnoxious.

This overhead disturbance was at the Mubadala Silicon Valley Classic tennis tournament in San Jose, which came to a close on Aug. 4. Venus Williams, who was the most famous name in the draw, bowed out in the first round. The 39-year-old former No. 1 wasn’t even born when the U.S. Open was last played in Forest Hills in September 1977.

For a recreational player, watching the pros can be humbling. It also can be inspiring. The athleticism is incredible. The movement – forward, back, side to side, lunging, lurching, pivoting. My body has never moved like that, even when I played as a kid.

Watching tennis on TV doesn’t adequately capture the power of these athletes. At this particular tournament it’s all women. This is one of the hardcourt tournaments leading up to the U.S. Open. It’s been called other things through the years and been played at other courts. Chris Evert, Martina Navratilova, and Serena Williams are some of the players who have been in the draw in years past. 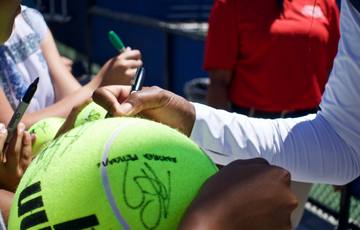 Fans clamor to get an autograph from Venus Williams. (Image: Kathryn Reed)

Tennis is a game of inches – or less. It is mental as much as it is physical; maybe more so. It is a solo endeavor, even at times in doubles. It is also an individual and a team sport. It is one of those rare games that can be played for an entire lifetime.

I’ve played competitively on and off since I was a kid. I will be forever grateful to my mom for introducing me to the sport. While she dabbled in it as an adult, now she is solely a spectator. She has been there to root for me through the years; even watched me play with friends in Todos Santos last November. 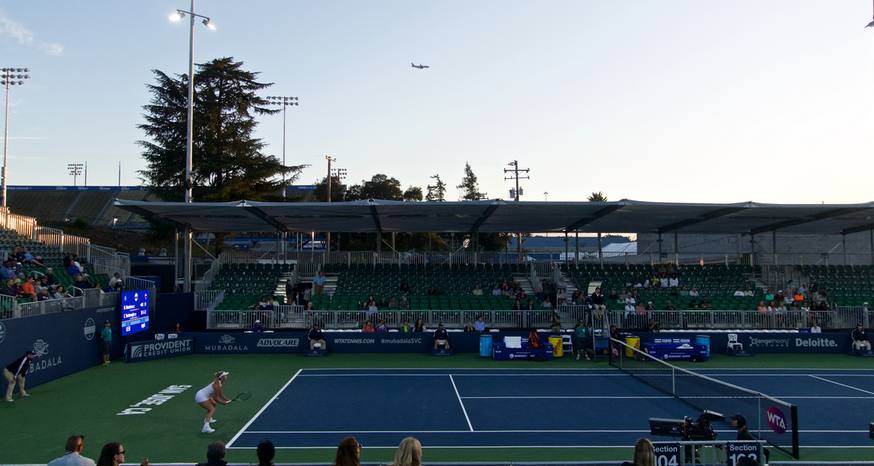 Planes at the Silicon Valley Classic are not as distracting as they once were at the U.S. Open. (Image: Kathryn Reed)

My competition in the last year has been in Todos Santos, Baja California Sur, where there is an incredible tennis community. Twice a year there are two tournaments, usually where there are two teams. This rivalry is friendly and a bit fierce. The tennis is wonderful. As an adult, it’s the most fun competitive tennis I’ve played. It’s all because fun is the focus. Friendships have not been strained or lost, as has been the case in the U.S. on teams. I’m looking forward to the tourney this year in November. We are known as the Royal and Ancient Baja Sur Tennis Association (RAABSTA).

While I’m not on a USTA team now, I’m enjoying playing truly for the fun of it this summer in Tahoe. In Mexico I was playing women’s doubles twice a week and mixed doubles once week. In Tahoe now it’s a random mix of women’s doubles and singles.

My philosophy is if I’m not having fun on the tennis court, there isn’t any reason to be there – win or lose.