Time to rethink pledging allegiance to a flag

Pledging allegiance to a flag seems so absurd. And yet I do it when the occasion arises.

I’ve thought about sitting, but was afraid people would think I was making a political statement that had more to do with who resides at 1600 Pennsylvania Avenue than it being the fact that I don’t see the point in pledging allegiance to the flag. 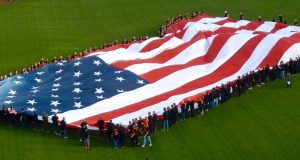 Questioning the need to pledge allegiance to a flag. (Image: Kathryn Reed)

This past summer I attended a few service club meetings as a guest speaker to talk about my Tahoe hiking book. Reciting the pledge of allegiance is a normal way to open these meetings. I did what I’ve done for a few years, and that is to be silent during the “under god” part because of my religious beliefs. The god part wasn’t even in the original pledge; that was added in 1954 at the direction of President Dwight Eisenhower.

The pledge originated in September 1892 to commemorate the 400th anniversary of Columbus Day. That’s a bit ironic considering so many places are getting rid of Columbus Day and instituting Indigenous People’s Day. It was first published in a magazine for schools to promote nationalism to youths. It was in 1942 that the federal government recognized the salute.

Not reciting the pledge, kneeling during the national anthem, a fist in the air – everyone has their own reason for their actions. It doesn’t make them any less patriotic than those who participate in a more conforming manner. It might make them more patriotic because they are taking a stand, so to speak, for their beliefs.

That is one of the beautiful things about the United States of America – we get to protest, we can burn the flag, we can disagree with politicians and the power structure, we aren’t going to be thrown in jail for our opinions.

With this being Veterans Day, I’m sure some will see this missive as blasphemy. But the truth is this is when the flag should be revered; flown with pride for those who have served in our armed forces.

Our flag, as probably all are, is a symbol of many things. It is time for me to stop going through the motions and be true to my beliefs. I would gladly pledge allegiance to the Constitution, just not the flag. The two represent very different things to me. After all, when politicians take an oath of office it is to protect the U.S. Constitution — not the flag — and to uphold laws at lower levels of government. (I don’t understand swearing on a Bible, nor would I ever. Why not place one’s hand on a copy of the Constitution?)

If it’s so important to open a meeting with a pledge, let it be to the Constitution. Now that’s a movement I could get behind. Or better yet, completely abandon this silly, useless ritual of pledging to anything at the beginning of all meetings.