It was back as soon as I was across the border – the Jeep Wave.

I’ve known about this wave for years from when my ex drove a CJ-5. He’d wave to other Jeeps. Real Jeeps, as he would say. Not the Cherokees and later models. It was the Wrangler style he waved to, and who waved to him. While there are stories online saying all Jeep owners wave to one another, my experience is it’s a Wrangler thing. And I’ve been a Wrangler owner since 2002. 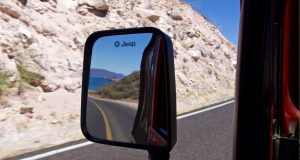 It’s possible the Jeep Wave is just a U.S. custom and not the universal sign of kinship I thought it was. There were no waves in Mexico.

There is no definitive history on the wave’s origins. The story I like, though, has its roots in World War II. Some say it started overseas where drivers shared a friendly hand gesture of acknowledgment. Others say it started once the soldiers returned to U.S. soil. They were apt to be the ones driving one of these vehicles; so it was a signal to a buddy who had survived the conflict. During the war the vehicle was built by Willy’s and Ford. It was known as a jeep, with a little J. Then a civilian version was developed. Those exteriors resembled what is on the road today.

It’s not a wave in the sense of a full-on arm gesture. Often it’s fingers coming off the steering wheel while the palm stays on it. It could be a peace sign. When the top is off or the window down the hand might be outside.

While I’ve been off-road, I’m not an off-roader. I don’t have big, gnarly tires. The rig isn’t jacked up to clear massive boulders. Still, even those Jeepers wave to me even though the wheels are most often on pavement (except in Baja with all of its dirt roads). The only judgment among Jeep owners is snickering at the wannabe Jeeps. I won’t name models, but you know what I’m talking about.

It’s weird to admit I actually missed the Jeep Wave. I didn’t know I was missing it until I started seeing it again on the day I returned to the U.S.