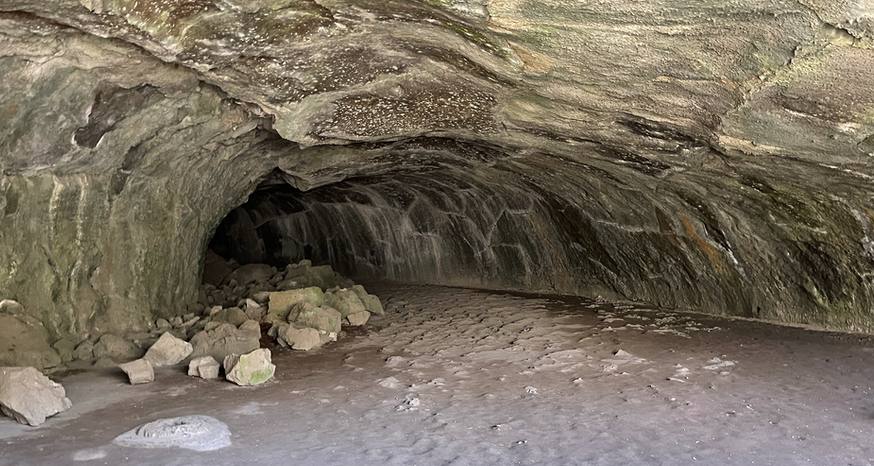 Subway Cave in Lassen National Forest is free to tour, except when closed in winter. (Image: Kathryn Reed)

A dose of natural air conditioning was one of the best endings I’ve ever had to a hike.

Subway Cave provided a rapid cooling off. After all, the average temperature is 46 degrees. Above ground it was probably in the 80s in the sun, with it feeling even hotter after hiking.

Beyond bringing down the body temperature, the cave was a fun discovery that I did not know existed until going there the last Saturday of August.

According to the U.S. Forest Service, this is how the cave came into existence: “Less than 20,000 years ago the lava of the Hat Creek flow was discharged in large volumes from a series of north-south fissures, (or) cracks in the earth. This river of lava located near the town of Old Station, crawled northward 16 miles, covering the floor of Hat Creek Valley. While the top crust cooled and hardened, rivers of red-hot lava insulated by newly formed rock above, continued to flow. Eventually, the lava drained away, leaving tube-like caves. The entrance to the cave was formed by a partial collapse of the cave’s roof many years ago. Subway Cave is the largest accessible tube in the flow.”

Someone had fun with the names within the cave. It starts with Devil’s Doorway, then Stubtoe Hall, Wind Tunnel, Lucifer’s Cul-de-Sac (a dead-end offshoot that narrows in height and width), the Sanctum (the widest area), Lavacicle Lane, Rattlesnake Collapse (a pile of rocks that broke off), and Lava Bubbles. 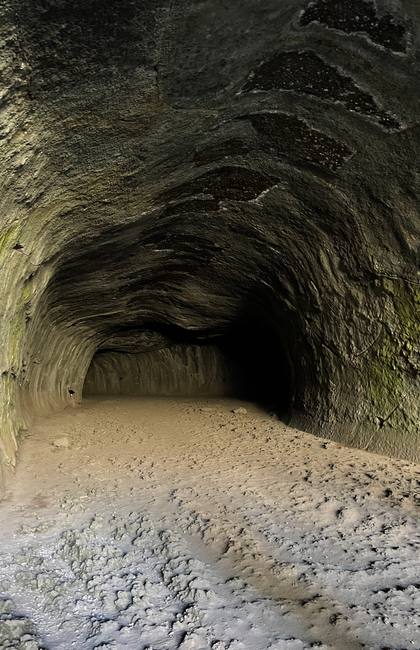 At about one-quarter mile, most anyone could explore this underground cave. The ceiling is high enough (though I could touch it in one area) and the walls spaced sufficiently apart that claustrophobia was not an issue. It ranges from 6- to 17-feet tall.

If there would be an issue for anyone, it would likely be with the floor surface. Smooth it is not. One person described it like walking on an alligator. Not sure how she knew what that felt like. Still, it was rough, even spiky in places. Solid shoes (not flip flops) would be best.

Definitely bring a flashlight or headlamp because at times it’s impossible to see the light at either end.

The cave is open May through October. No fee to enter, but donations are accepted. It is one-quarter mile north of the junction of highways 89 and 44 in the Lassen National Forest. Stairs are on either end of the cave to enter/exit, which could be an access issue for some.