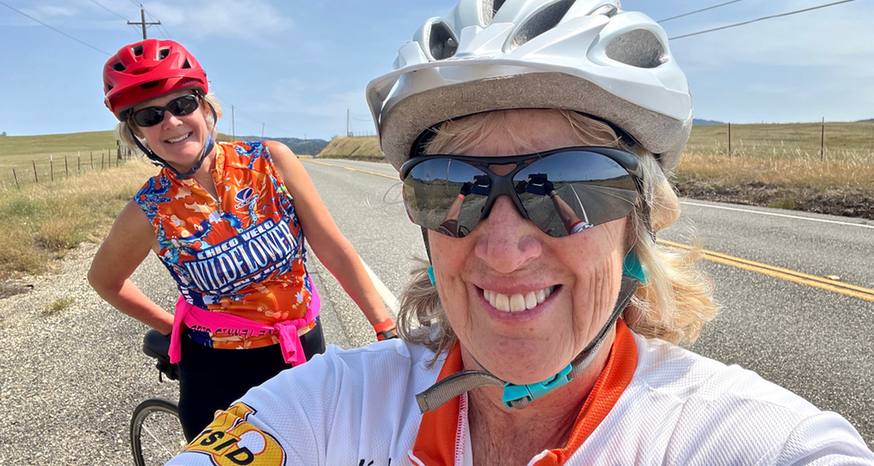 Kae Reed and Sue Wood back on flat ground during the Wildflower ride on April 24. (Image: Sue Wood)

Something was clearly wrong. We were supposed to only climb 200 feet total and we were already beyond that marker. From our vantage point the hill we were on looked like it stretched to the sky with no end point.

What was wrong was the markers for the ride got screwed up. We weren’t alone in being on the wrong route for the Wildflower bike ride in Chico last weekend. I don’t know how many cyclists ended up climbing when they didn’t expect to.

We were supposed to ride 60 miles of flat terrain with a total elevation gain of 200 feet. The route (there were seven) we ended up on was the 65-miler with hills. My app recorded 2,350 feet of elevation gain.

I’m so unserious that I don’t even know how to change a flat tire. In fact, on a training ride the weekend before my sister came to pick me up when my tire blew. In retrospect that flat was a good omen because the bike shop said the whole tire needed replacing.

Going up Clark was a grind. Fortunately, there was a rest stop essentially at the top of the hill. This is where we found other people with orange wrist bands who were now on the wrong route. While we knew we could have turned around on the hill, I had lobbied to keep going. I decided a hill was better than added mileage.

At the rest stop people said the hills were over and that only small ones, like going over an overpass, would be all we would encounter. I soon learned that description was a bunch of BS. I had been taking this whole wrong, hilly route in stride with a good attitude until I hit Pearson Road. Damn. I walked the bike a bit. It’s not that it was harder than Clark, it’s just that I hit a mental wall. We weren’t even 25 miles in and I started getting pissy because I didn’t want any more climbing.

After Pearson there wasn’t. But I did have to get off the hill. While so many people relish this part of a ride, I get scared going downhill. I don’t like to go fast. In fact, my hands hurt so much from braking that I literally have to stop on a downhill. In this case, I stopped twice to stretch out my hands.

More proof I am not a serious cyclist.

Positive attitude resumed once we were back on the flat. The roads took us to the town of Durham. From here it was confirmed we could ditch this 65-mile route and take a short cut back to the fairgrounds.

We ended with 50 miles. Less than we intended from the get-go, but with more than 10 times the elevation we had planned for. Not bad for a Sunday ride by a non-serious cyclist.