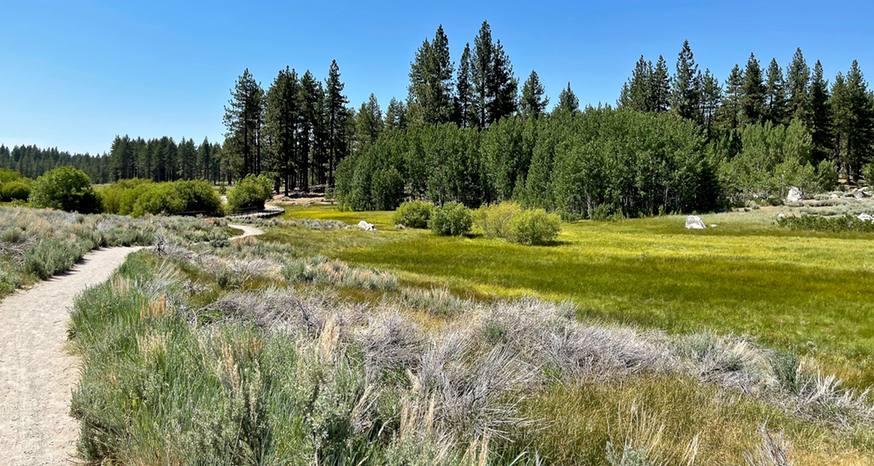 Despite not much snow last winter, Rabe Meadow is lush. (Image: Kathryn Reed)

It’s amazing how much beauty and history can be packed into a walk that is only about 2½ miles round trip. Such is the case with Rabe Meadow on the South Shore of Lake Tahoe.

Many people access Nevada Beach by driving in. It’s definitely faster, but it also costs to go that route. More important it’s less scenic because the expansive meadow is never seen. And it also means not learning about the area via the various signs put up by the U.S. Forest Service, which owns this swath of land.

When walking to Lake Tahoe from Kahle Drive in Stateline the beach is secondary in many ways. I took my time to enjoy the green grasses, a few wildflowers and admire the stands of conifers. It makes the walk so much more than just an excursion to the beach. 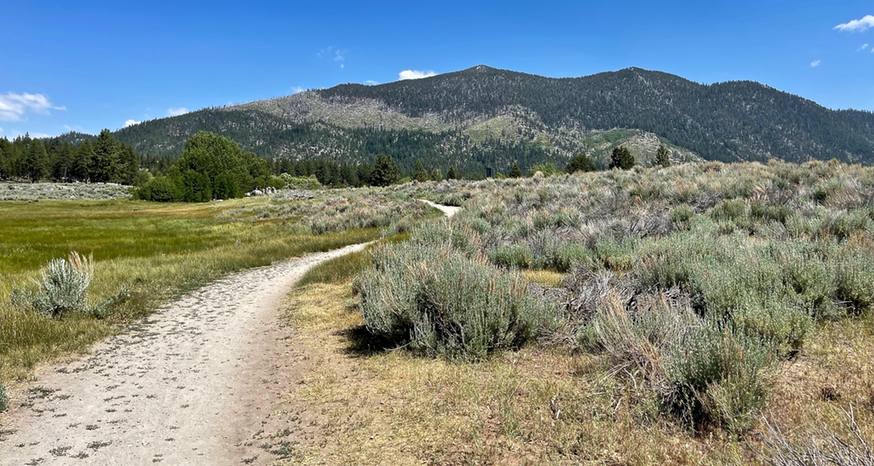 The scar from the Gondola Fire is prominent on the mountainside. (Image: Kathryn Reed)

Coming back, views are different with Heavenly Mountain Resort a focal point. The scar from the 2002 Gondola Fire is still distinct and probably will be throughout my lifetime. A forest is going to burn when someone throws a cigarette butt out of a gondola car. I still wonder if that person has nightmares every night.

It’s definitely a prettier walk going toward Nevada Beach because there are fewer buildings to see compared to the return trip.

This is one of those treks I never get tired of, though. I made a point of walking it last month. It’s a completely flat trail on hardpack dirt or decomposed granite.

Before white people took over the Lake Tahoe Basin this meadow was home to the Washoe tribe. Pine nuts, berries, medicinal plants, and material for baskets were all found in the meadow area.

By 1859 the meadow had become a logging camp. This was to supply lumber to the mining camps east of Tahoe in the Virginia City area. Gilman N. Folsom bought what was one of the last private stands of Jeffery and sugar pines for $750. He then created Hobart’s logging camp. 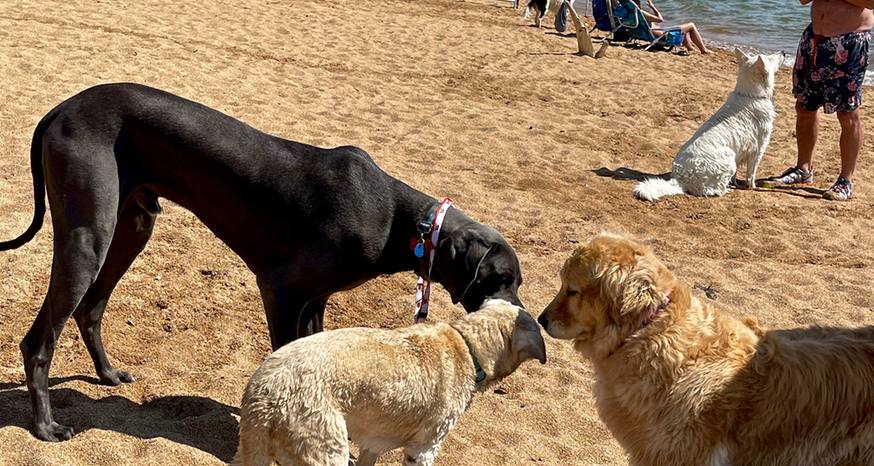 Dogs are allowed on Nevada Beach at the south side and on leash when walking in. (Image: Kathryn Reed)

The information sign says it took eight years to fell all of the old-growth trees. Folsom eventually went bankrupt.

During the late 1940s a dirt runway was created. “… this land was used for the Sky Harbor Airport and Casino, which flew its wealthy patrons in from San Francisco to spend money in the local casinos. Unfortunately, flying in and out was dangerous because of high winds and a steep descent.”

Fortunately, the U.S. Forest Service has done a good job to restore much of the area to what it looked like when the Indians called this area home. Environmental improvements, like a walkway above marshy areas, have been installed.

In 2013, a section of Nevada’s Stateline-to-Stateline bike route was paved here; going from Rabe Meadow to Round Hill Pines. Not one tree had to be removed for the path.