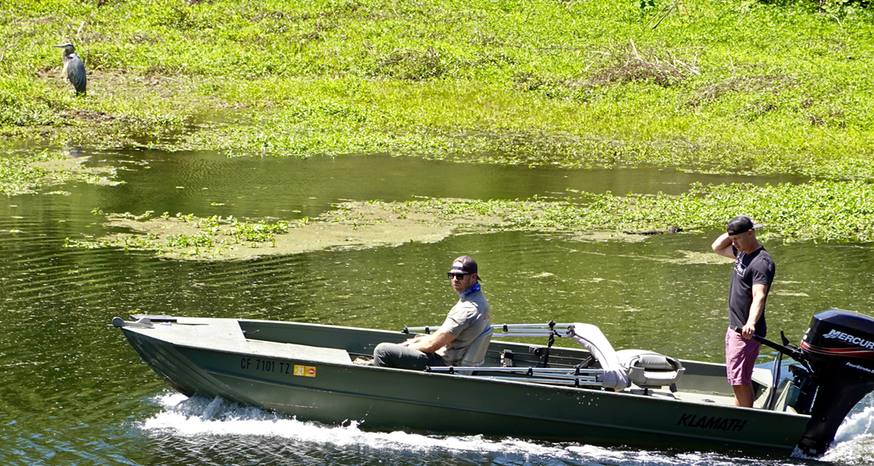 A blue heron, upper left, and fishermen on the Sacramento River seem to ignore each other. (Image: Kathryn Reed)

Water and birds—that’s what the Bidwell-Sacramento River State Park is known for.

An egret and blue heron sat along the water’s edge as we explored; a juvenile bald eagle flew over as we were having lunch. What we could have spotted if we had brought binoculars and actually knew more bird species, well, that will never be known.

A couple who regularly visits the area said it’s also common to see turtles and deer. A matted down grassy area looked like it might have been where some deer chose to rest when people weren’t around. River otters are also in the water.

This 349-acre state park, which is in Butte and Glenn counties, was established in 1979.

According to the park’s website, “The main activity to be enjoyed at Bidwell-Sacramento River State Park is bank or boat fishing for salmon, steelhead and shad. The next popular activity is cruising down the river on inner tubes, canoes, or kayaks.”

With the water still being chilly only a single boat with a couple fishermen were out earlier this month. A few more days in the 90s and that could all change. After all, what is being released via Shasta Dam is coming from the bottom of Shasta Lake. 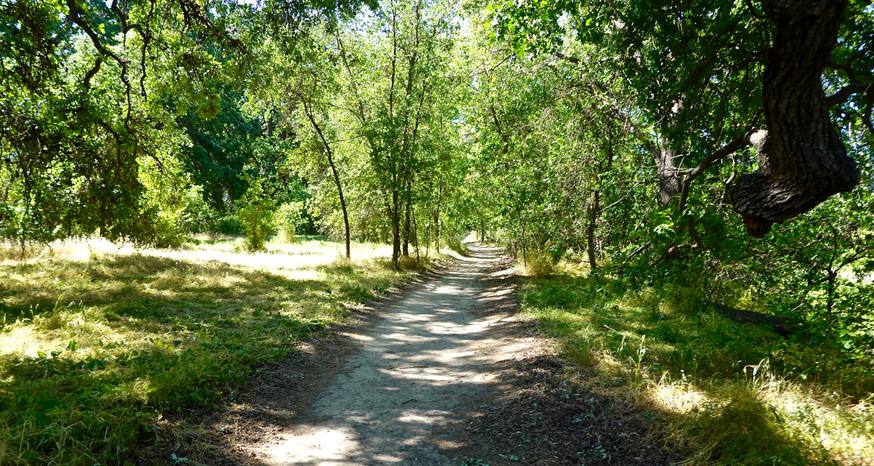 Mom and I spent a morning exploring a few sections of the park. We put in 2.62 miles walking three areas. The Indian Fishery Nature Trail is a loop of about three-quarters of a mile. This saunter is through a grove of oaks along Ox-Bow Lake, which now is more like a mud flat with puddles. Still, the scenery is great; with plenty of shade.

More exposed terrain that has a little less even footing, though nothing that would require poles, was found just south of the loop along River Road. This was great for walking along the Sacramento River. Rocky beaches would be ideal for lounging or taking a break from playing in or on the water.

Across from that entrance on the other side of the road is the Big Chico Creek day use area. There we did nearly a mile loop. A section of the trail led us into a walnut orchard. While there were no signs saying we were trespassing, we opted to turn around to walk back along the grassy meadow.

It makes sense that hiking is not one of the activities this area is known for. Still, it was worth checking out.

As the website says, “The river’s various landscapes display great scenic beauty and constant change. The riparian plant and animal communities here depend strongly on each other. Massive oaks and cottonwoods give the dense shade needed for the survival of cool-water creatures. Thick understories of elderberry, wild grape, blackberry, wild rose and numerous perennials provide shelter to a diversified wildlife population. The park offers a great setting for observing and learning about the riparian community.”

Earlier this year a 25-acre former walnut orchard owned by the state was restored for riparian habitat by California State Parks, Butte County Resource Conservation District and River Partners. This land is adjacent to the Pine Creek Access Unit. Funding for the 11,000 plants (27 native species of trees, shrubs and herbaceous flora) came from the 2018 voter approved Proposition 68: California Drought, Water, Parks, Climate, Coastal Protection, and Outdoor Access for All Act.

We ended our excursion at Scotty’s Landing for lunch. This is a Chico institution of sorts that has been in business since 1955. Walter Scott started the restaurant, with his son, John, eventually taking over. It’s seen better days. A fresh coat of paint and removal of a lot of junk on the deck and inside would make the restaurant more inviting. Fancy it will never be, which is a good thing. The veggie and meat burgers were good, as were the fries. The beer on tap could have been colder. More seating for a view of the Sac River would be a great improvement. It’s worth stopping at if in the area, but don’t go out of your way. 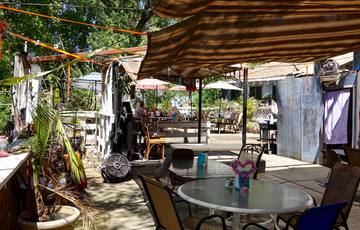 The deck at Scotty’s Landing has plenty of shade for eating outside. (Image: Kathryn Reed)