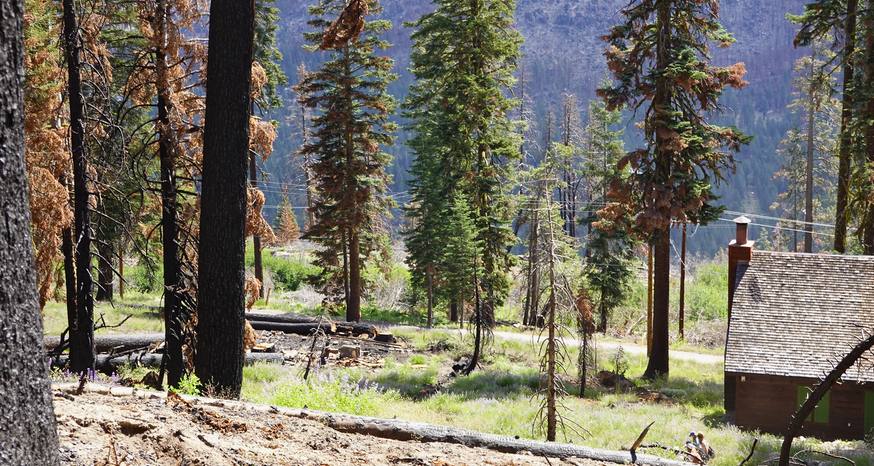 To the left of the cabin near Echo Lake is where another one stood before the Caldor Fire. (Image: Kathryn Reed)

The hum of a chain saw was background noise as a group of hikers stood surrounded by trees in the Eldorado National Forest that were blackened by last summer’s Caldor Fire.

Across the way is Angora Ridge which burned in the 2007 Angora Fire. The hillside is green, giving hope that one day the ground where we were standing would be full of life again as well. But the reality is that ridge and the freshly charred land won’t see substantive trees again for a very long time.

Don Bailey with the Tahoe Rim Trail Association noted how there are still no large trees where the 1992 Cleveland Fire in El Dorado County burned 24,580 acres. 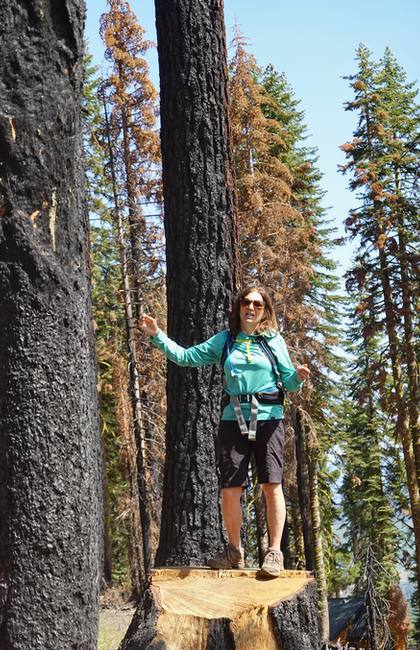 Maria Mircheva with the Sugar Pine Foundation talks about the resiliency of forests. (Image: Kathryn Reed)

Even so, a bit of hope could be measured by the 1- to 2-inch pines poking their green needles out of the soil.

This nearly 4-mile round-trip excursion on July 19 was put on by the TRTA. About 30 people walked into the forest from the Echo Lake sno-park toward the lake. Volunteers with TRTA and Maria Mircheva with the Sugar Pine Foundation told the group what they were seeing, and what they could expect in the future.

Bailey pointed to a stump that used to be a 1,000-pound tree. “It was so darn hot it vaporized.” What was left, he said, could be put in a shopping bag.

Starting out from the parking it was a mix of healthy and burned forest. In places the ground was soft like walking in sand. But this wasn’t sand. It was a deep layer of ash. 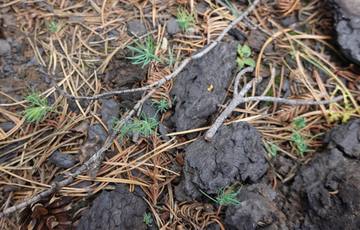 Forest litter can turn into oil if it has not been a severe burn.

Grasses and flowers are the first to sprout after a fire. The flora—lupine, blue-eyed Mary, currant, goose berry, Alpine daisy and others show how resilient Mother Nature is.

The TRTA will need to replace trail signs that burned in the fire. Trail work started months ago and is continuing.

About a quarter mile of new trail was already planned for this area. It will go from the parking lot to about where Johnson Pass Road and Highway 50 meet. This is to provide access to the Rim Trail with a nearby parking area.

The Sugar Pine Foundation has already planted trees in the Caldor Burn area and plans to do more when the U.S. Forest Service gives the greenlight. For now, the nonprofit is collecting seeds. 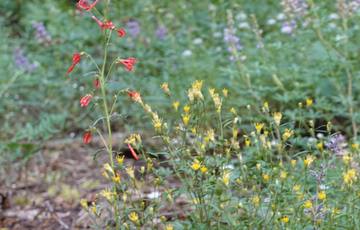 Flowers are some of the first flora to show life after a wildfire. (Image: Kathryn Reed)

We were walking at an elevation of about 7,400 feet, with Western white pine, lodgepole pine and red fir visible.

As we approached the cabins in the Echo Lake area owners who were along on the hike told stories of “heroic efforts” by other cabin owners, some with firefighting experience. One owner said how firefighters didn’t realize all these cabins existed. They didn’t have a map of the area with them. This woman said more than 30 cabins burned, mostly close to Highway 50 and none right on the lake.

While the forest will take time to cover, the animals that live in it are also adjusting. This same cabin owner said how more bears are in the area and fewer birds.