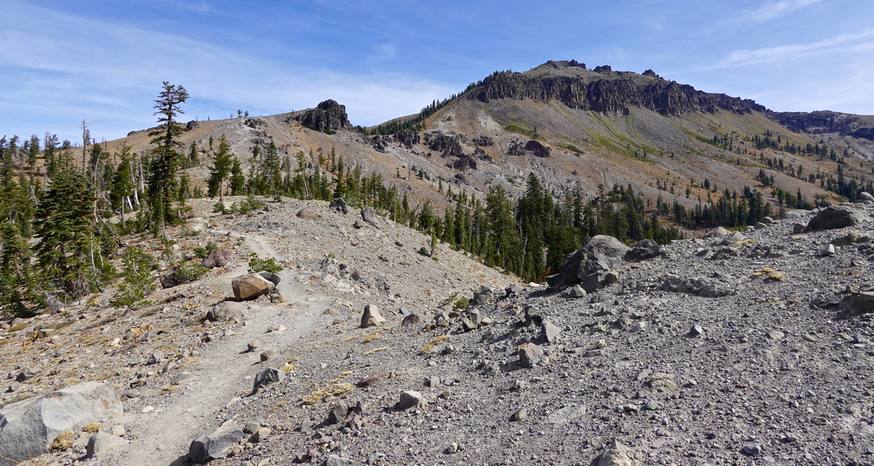 Looking up I tried to find the castle. Someone with a better imagination must have named this rock outcropping. While others saw turrets, I saw volcanic rock.

Castle Peak is something I have driven by countless times while zooming along Interstate 80, but it wasn’t until the last Saturday in September that I climbed to the top. It was magical even with the smoke. While the air quality hindered our ability to see Mount Diablo, the mountain I grew up by in the San Francisco Bay Area, or Mount Lassen, the southern-most peak in the Cascade Range, the views are why you want to climb this mountain. 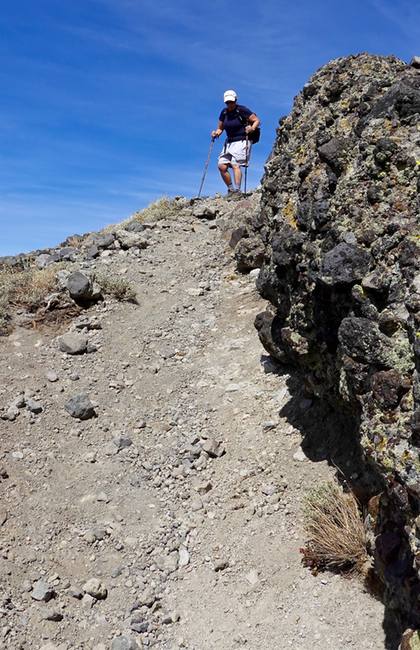 Sue Wood takes her time on the loose rock on top of the hardpack trail. (Image: Kathryn Reed)

While the tippy-top is actually 9,103 feet, we made it to 8,998 feet. A fear of heights kept me away from the “turrets”. Plus, there was no advantage to going higher in terms of being able to get a better view.

Looking north was the distinctive Sierra Buttes. Turning to the east was Stampede Reservoir. The nearest iconic fixture were the slopes of Boreal ski resort. It was 360 degrees of beauty—with rugged mountains, a beautiful meadow, peaks whose names I had not heard of nor could I find them all on a map. While plenty of other people were enjoying the scenery and having a bite to eat before heading back, it was a respectful group. No loud chatter, no obnoxious cell phone calling as has been my experience at other times in the Sierra. 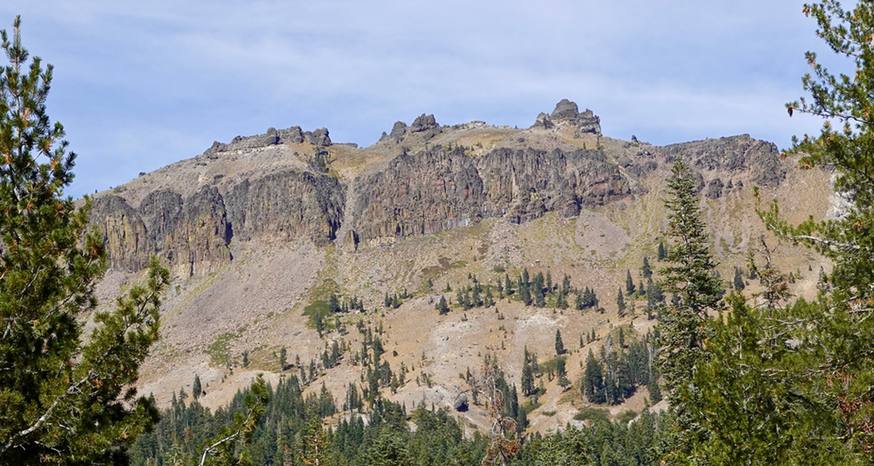 While some see turrets on a castle, others only see rock formations. (Image: Kathryn Reed)

We started our adventure at the gate just off the interstate, though it would be possible to drive the better part of the way to the top. The reason to drive would be to access other trails without having to hike as far. We ended up doing a loop instead of an out and back. The loop was a bit shorter because the route we took back was more direct. We clocked 6.43 miles total. 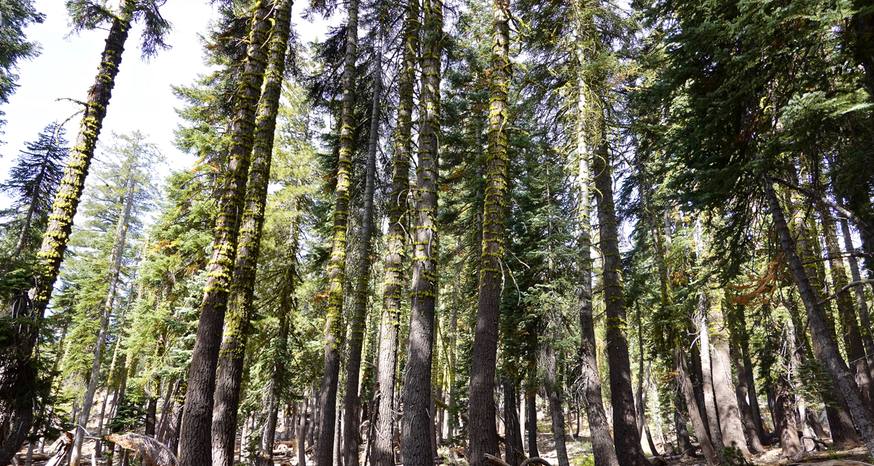 From the gate where you park there is a choice to go left or right. Go right. This would also be the dirt road (Castle Valley Road) you could drive on; four-wheel drive vehicle recommended. Not too far up there will be a fork in the road, with a sign signaling right for Donner Lake Rim Trail. Follow this for the more scenic route. Going straight is the route we came down and the one you would want to drive in order to park as close as possible. You will hit another juncture, Castle Pass, where you will go right. 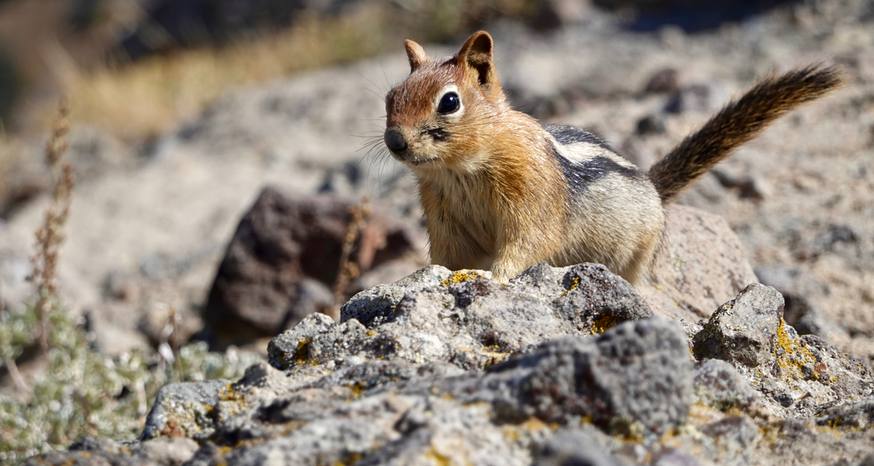 Be watchful of the wildlife who want to share or perhaps steal your lunch. (Image: Kathryn Reed)

Once on the single track part of the trail and off the dirt road the terrain changes dramatically. Trees are closer together, with patches of dried mule’s ear clapping in the gentle breeze. At certain points the view to the west opened up.

Part of the route is along the Pacific Crest Trail, but those hikers are long gone in the fall.

All but about the last mile is relatively easy or moderate as far as Tahoe area hikes go. It’s the steepness at the end that will have you slow your pace. Coming down it was the scree on the path that made me so thankful to have poles. 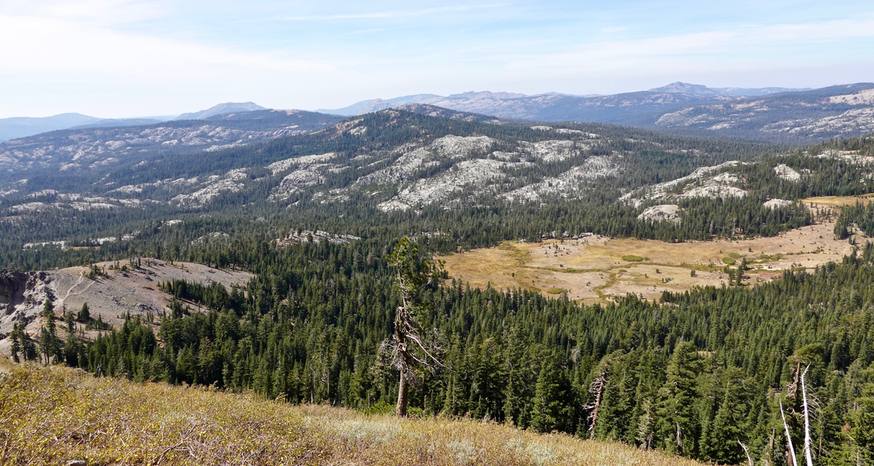 Views in every direction are the reasons to climb Castle Peak. (Image: Kathryn Reed)