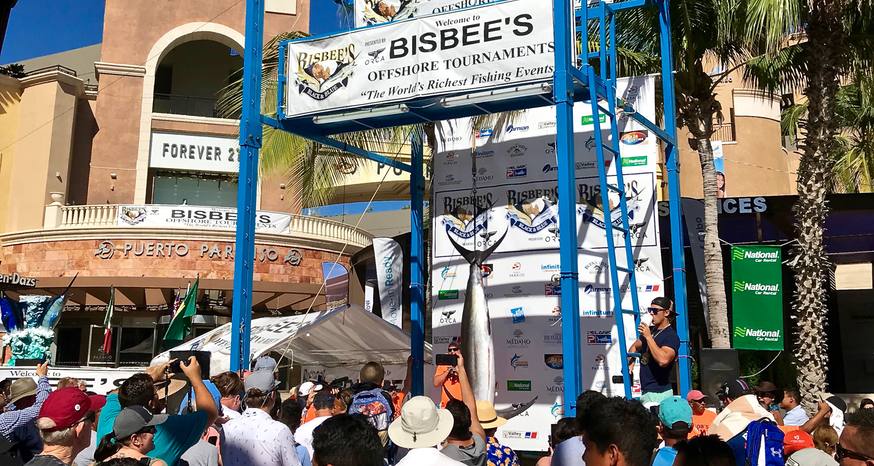 The winner of the 38th annual event was angler Charlie Lee of San Diego on the boat Chinito Bonito. The check was for $3,004,900. It was a 504-pound black marlin that tipped the scale. Only three fish made it to the weighing station. The others were 359 and 308 pounds.

The three-day October tournament saw 114 teams competing in the Sea of Cortez and the Pacific Ocean.

The event was started in 1981 by Bob Bisbee in what was a tiny fishing village. The Los Cabos region no longer fits that description. The purse then was $10,000. (Bisbee died in summer 2018, with his children now running the operation.)

This is strictly a marlin tournament (as in black marlin and blue marlin like the name says), with only those 300 pounds or more even considered for points. Anything less must be tossed back. Even then, each angler can only bring in one blue and one black marlin a day and each boat can only reel in two of each per day. Striped marlin must be released no matter what.

Los Cabos (the name for Cabo San Lucas and San Jose del Cabo) is known as the marlin capital of the world. Even so, there are 850 fish species in Baja California Sur, which includes the Pacific Ocean and Sea of Cortez. The cape is where these two bodies of water meet. 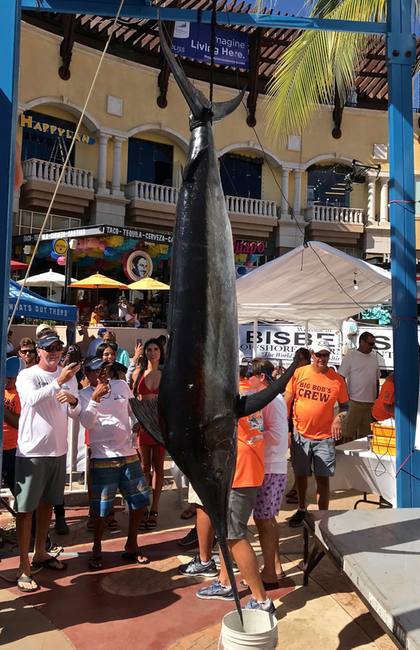 This 359-pound marlin was the second largest in the 2018 Bisbee’s Black & White Tournament. (Image: Kathryn Reed)

Several years ago fishermen began to notice their catches were dwindling to alarming levels. Overfishing is one culprit – those fishing for consumption as well those for sport. Another factor is climate, especially with warming ocean waters. At one point in summer 2018 the Cabo area had some of the warmest waters in the world.

(Besides affecting aquatic life, the warming ocean is increasing hurricane activity. The 2018 season, May-November, ended with a record number of tropical cyclones that formed in the eastern Pacific and Atlantic oceans. On the Accumulated Cyclone Energy index meteorologists recorded 432 events. The previous record was 371, set in 1992. These weather phenomena also cause imbalances to fisheries.)

Fishing is one of the main reasons people travel to Los Cabos and Baja Sur in general. Today operators offer catch and release excursions, or have this policy for certain species. The belief is this will help maintain the fish populations.

The government has gotten involved as well by establishing rules for what can be caught, criteria in terms of weight and quantity, and it has put some species completely off limits.

Scientists are starting to study the impact of catch and release fishing as well. How many times can a fish have a hook in its mouth and for how long can it be out of water before permanent damage is done? The Journal of Experimental Biology published research in October 2018 that didn’t have good things to say about “angling-induced injuries.”

According to PETA’s website, “Fish have nerves, just like cats, dogs, and humans, so they can feel pain. Hooked fish endure not only physical pain but also terror. When they’re removed from their natural environment, they start to suffocate. Just imagine the horrible feeling you’d experience if you were trapped underwater. It’s the same for them on land!”

Fishing and hunting are the same; just that one is done on water, the other land. It’s either about the thrill of killing a wild animal, or it’s about dinner. The latter is not what tourists are generally interested in. They are on that boat for the selfie and adulation from friends on social media.

The good that comes out of Bisbee’s Black and Blue tournament is the fish that are hauled in end up feeding local children in need. That animal isn’t a trophy on anyone’s wall.