It’s hard to know how many people have pedaled or walked under the large sprockets that designate the Steve G. Harrison Memorial Bikeway in Chico.

The avid cyclist died in summer 2007 at the age of 56. His body was recovered in the Sacramento River days after he went missing.

Harrison would have turned 70 on June 24.

It’s a testament to Harrison’s impact on the local cycling community that such an impressive memorial was erected in November 2010 to honor him. Both steel sprockets are 15 feet tall. They were created by Jeff Lindsay of Red Hot Metal Inc. at cost of $40,000.

While the city of Chico owns the bike path, the memorial art was a donation to the city by Harrison’s widow, Linda Zorn. 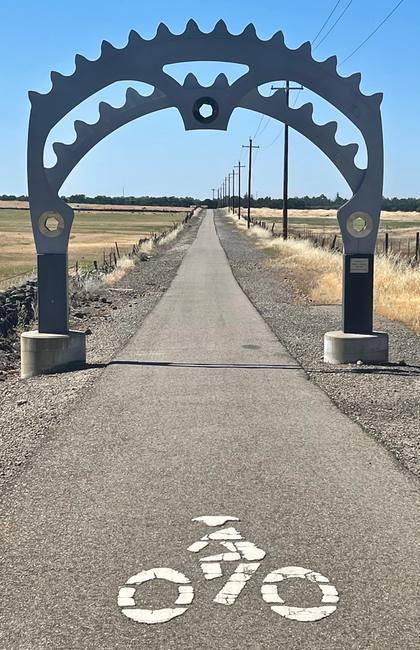 At each end of the nearly 1-mile paved path is two half sprockets that make an arch; essentially straddling the asphalt.

The trail runs between East 20th Street and Skyway Road. It then leads to Honey Run Road, which is appropriate because cycling through Butte Creek Canyon was one of Harrison’s favorite rides.

Harrison’s obituary said, “Steve was an avid cyclist, regularly joining friends on weekend rides throughout the north valley, foothills, and mountains. He was a strong advocate for cycling in our community and a wonderful friend to his many cycling partners. He also enjoyed several foreign cycling trips with friends and family, most recently to Italy.”

But there was more to Harrison. The obituary also said, “He also loved to hike in Bidwell Park and the Sierra Nevada. He was intensely interested in politics and was committed to progressive causes related to social justice, environmental sustainability, smart growth, economic opportunity, and universal health care.”

At the time of his death, Harrison was a vice president of locally owned Sierra Nevada Brewing Co. He was the brewery’s first employee.