Explosion of color on the way to Fourth of July Lake 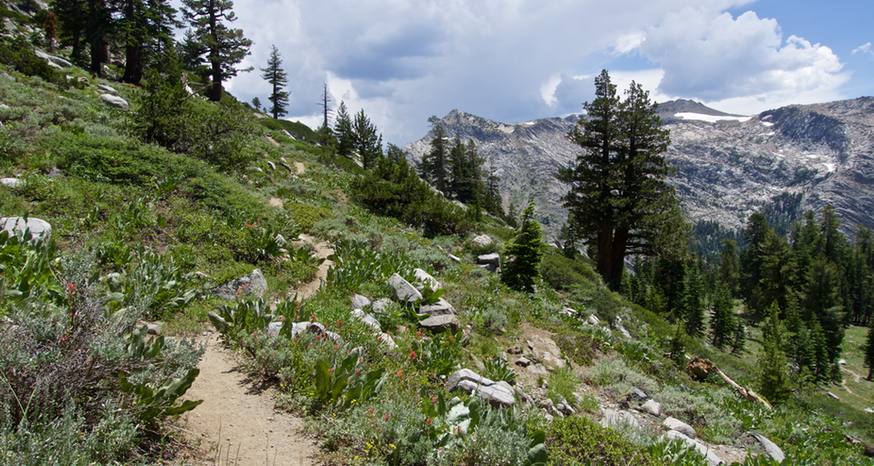 Hiking in the Mokelumne Wilderness stimulates so many senses. (Image: Kathryn Reed)

What goes down must come up. This can be a painful reality when the down comes in the middle of a hike. No fireworks were going off, but the drop into Fourth of July Lake was worth having to climb out 2 miles and more than 1,000 feet of elevation gain. 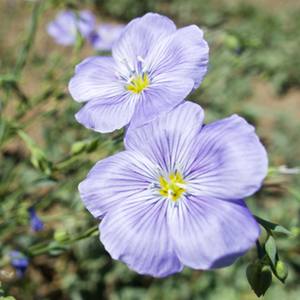 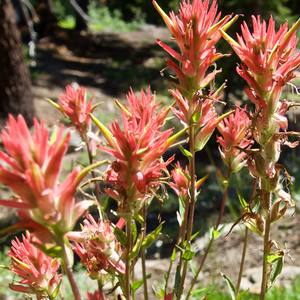 In mid-July the bonus was all of the wildflowers. The array of flowers and their size is largely dependent on the previous winter’s snowfall. The four of us were not disappointed with the variety on July 19. Columbine, lupine, mule’s ear, daisies, Indian paintbrush, yarrow, and so much more filled the terrain. Rubbing a few leaves of the mountain peppermint was a great way to cleanse my hands of the mosquito repellent. 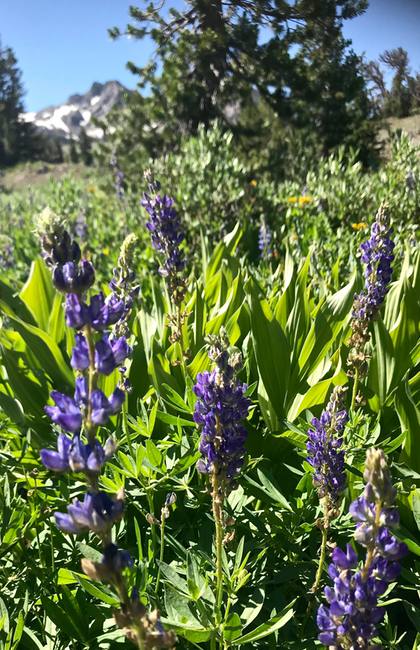 Lupine fields in the high country of Alpine Country are almost at peak. (Image: Kathryn Reed)

Stopping to take pictures made this a much longer day. No one was complaining. Flowers were growing out of granite rocks, in fields that carpeted the ground, in clusters like a bouquet, and as single strands of beauty.

Roundtop Lake with the reflection of the peak by the same name. (Image: Kathryn Reed)

Water was abundant along the trail, making the landscape so verdant, especially on the climb to Round Top Lake. These creeks would be a welcome relief for four-legged hikers. All the water meant two stream crossings across logs. There could be more in early season.

While the hike starts near Woods Lake, the trail doesn’t actually go to that body of water. However, it doesn’t take long for it to come into view through the tall pines. A highlight of this hike was that the views were always changing, seeming to only get better around each bend. It wasn’t long before Red Lake Peak (10,061 feet) and Elephants Back (9,585 feet) were visible. Not far off the trail was a distinct waterfall reminiscent of the Glen Alpine Waterfall near Fallen Leaf Lake on the South Shore. 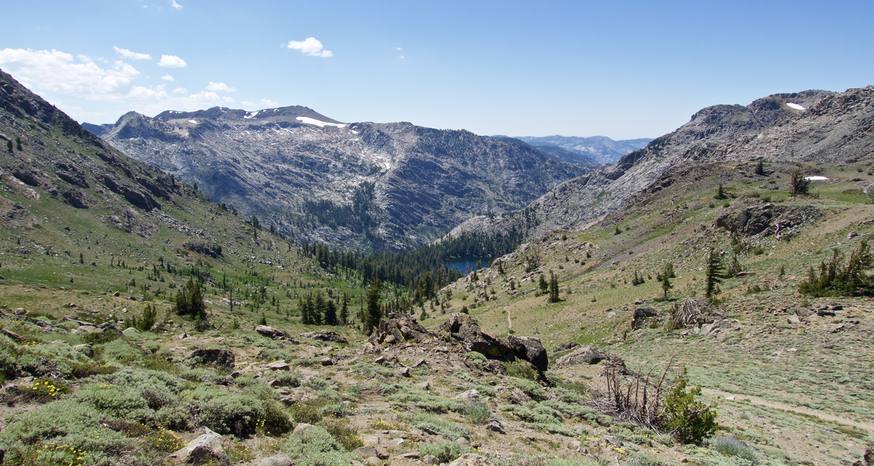 Fourth of July Lake in the center is about 1,000 down. (Image: Kathryn Reed)

At first the trees provided plenty of shade, but that didn’t last. Going higher the subalpine setting turned to more expansive land with few trees.

At times part of the trek is along what was obviously an old road. A rusted frame of a vehicle that we guessed was from the 1930s is off to one side facing a stream. A structure in the water we surmised was once a bridge. Why the people didn’t turn around we don’t know. If only the trees could talk. 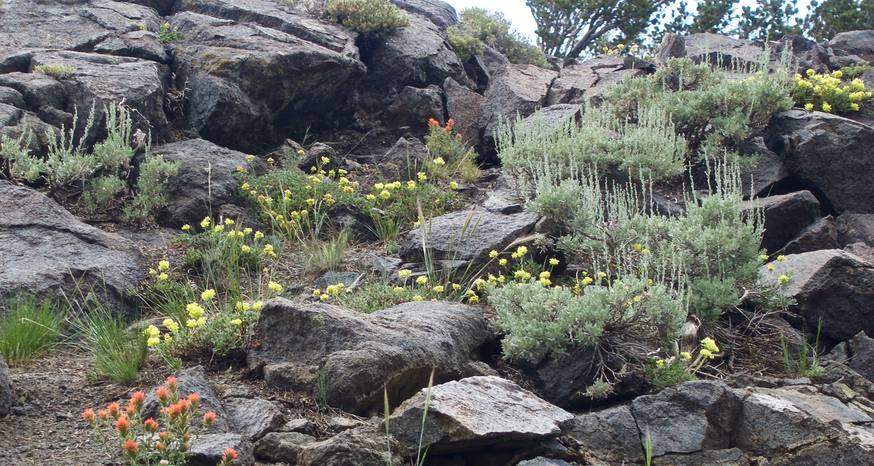 Several places along the trail flowers grow out of the rocks. (Image: Kathryn Reed)

Other parts of the trail were soft dirt with a thin layer of duff, other sections were rocky, some granite stairs had to be climbed, other parts were loose scree. I was happy to have my poles, which came off the backpack for the decent into Fourth of July Lake and were used the rest of the trek.

Once through the main section of wildflowers, Round Top Peak (10,381 feet) and The Sisters (10,153 feet) come into view. There wasn’t much snow left on Round Top, but one diehard skier found enough white stuff to make a few turns between the two peaks. It’s possible to stop at Round Top Lake. The beauty was magical as the mountains reflected into the water. 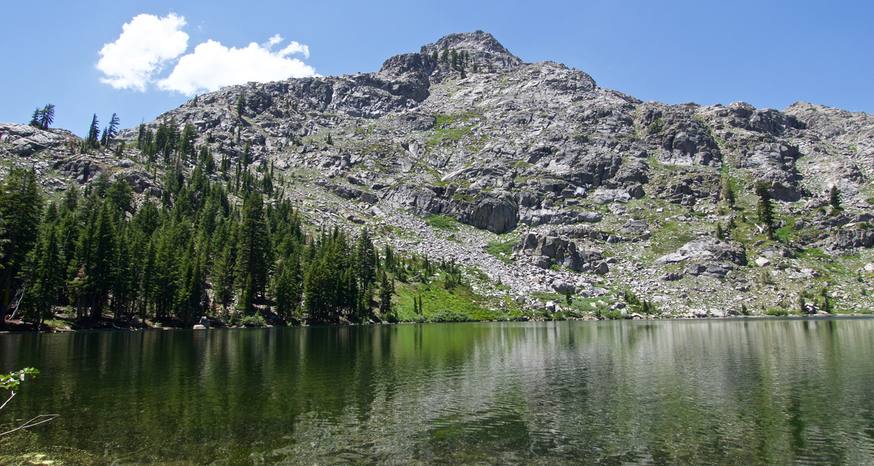 Fourth of July Lake is a beautiful spot for lunch. (Image: Kathryn Reed)

We opted to continue on to our destination. Even if you don’t want to make the descent into Fourth of July Lake, keep going until you see it. It’s worth the view even from afar. An outcropping of rocks is where two people in our group waited for me and Brenda as we headed to the lake. Once at the lake we were at tree line again, with pines surrounding us. On the far side of Fourth of July a small waterfall flowed from the rocks. It would have been possible to keep hiking from there. This section is part of the Tahoe-Yosemite Trail. We opted not to visit the national park that day.

Starting from the trailhead parking lot we clocked 9.82 miles round trip. The elevation at Woods Lake Campground, which is near where we started, is 8,240 feet. Fourth of July Lake is just a bit more than 8,000 feet. The problem, so to speak, is that first we climbed to 9,433 feet before dropping down. While we didn’t bag a peak this particular day, the graphic on the GPS looked like we did a couple.

Another option from this starting point is to make a loop via Winnemucca Lake. Signs make this an easy option at the get-go or when at Round Top Lake. The nice thing about bypassing Winnemucca is that you are likely to see fewer people, especially when the wildflowers are out. 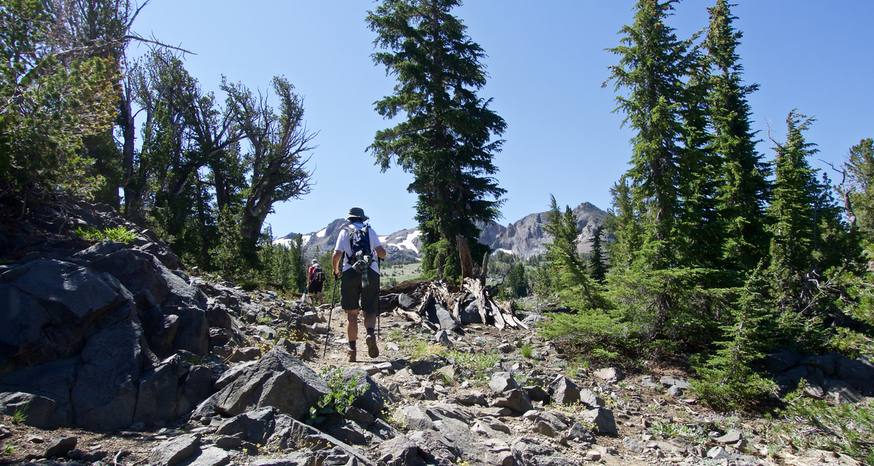 Brenda and Roni on their way to Roundtop Lake. (Image: Kathryn Reed)