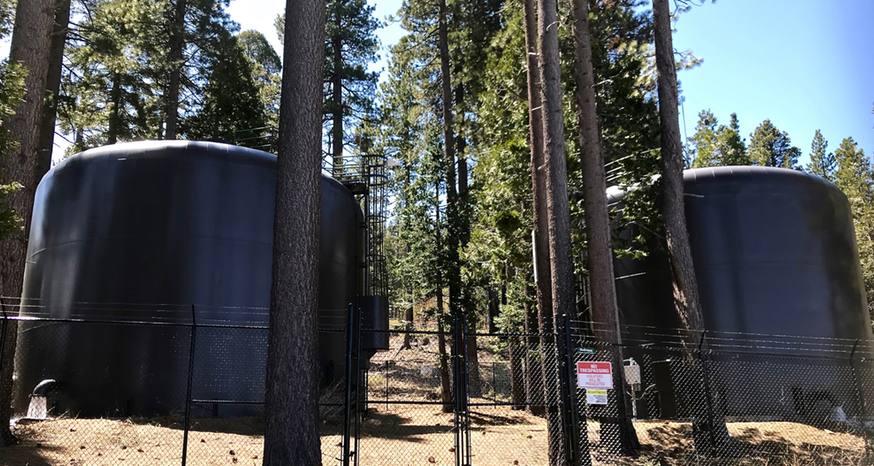 With the sound of flowing water getting louder with each step, something was clearly wrong. Even in spring the snowmelt doesn’t sound like this on Gardner Mountain. The culprit turned out to be the two massive tanks owned by South Tahoe Public Utility District. Water was flowing uncontrollably from the bottom valves of each tank, with no workers in sight.

What started out April 21 as twice-yearly routine maintenance of these tanks turned into thousands of gallons of water flowing through U.S. Forest Service property.

“We have level sensors at our tanks that transmit what the level is at our tank to our wells so we can decide when to turn on and off the wells. That level sensor was not reading correctly. It was off by a foot,” Shelly Thomsen, STPUD public affairs and conservation manager, said.

Normally, one employee is at the tank and another at the well when the routine maintenance overflow is tested each fall and spring. The work is done to ensure water quality for the residential and commercial customers. STPUD, though, has scaled back staffing because of the coronavirus. Only one person was doing the tank maintenance at Gardner Mountain. It wasn’t until he got back to the tank to see the water continuing to flow that he realized there was a problem.

Electricians were dispatched to fix the defective sensor.

These are two of the 21 tanks STPUD owns throughout its territory on the South Shore—all on the California side of Tahoe. They vary in size. The Gardner Mountain ones hold 212,000 and 187,000 gallons, respectively.

“We normally measure by time, instead of gallons of water, since our wells produce at different rates and tanks are different sizes. For the Gardner Tank, it is serviced by Valhalla Well, which runs at 465 gallons/minute. We normally overflow the tank for 15 minutes, which is 6,975 gallons. Today, we overflowed the tank for 20-25 minutes due to the sensor not reading correctly, which used around 9,300-11,625 gallons of water,” Thomsen said.

The water was gushing from the lower valves and then running downhill into the forest. Lisa Herron, spokeswoman for Lake Tahoe Basin Management Unit, said the water “is released into a rock-lined channel.” That supposed channel was not visible. She also said STPUD staff said the water flow did not cause erosion, but no USFS person inspected the area.

STPUD tries to keep the tanks full in case demand surpasses what wells can pump. This usually isn’t a problem in the winter. It’s during the summer when people start irrigating that usage increases dramatically. The other reason for full tanks is to aid in firefighting so water pressure will be as high as possible.

What the water-sewer district has noticed during this pandemic is a reduction in water use. Even though more people are working from home, hotels, restaurants and other commercial entities are mostly shuttered. Heavenly Mountain Resort is STPUD’s biggest consumer of water. The resort, per state order, closed this season on March 17. (In 2019, the ski resort closed May 27 and in 2018 it was on April 22.) Snowmaking is a large component of Heavenly’s water consumption, but it also has numerous restaurants and bathrooms.

In March, STPUD set a record low for water production. This is how many gallons of water is pumped from the ground into the system. It’s another way of saying water use.

“For the last three years we’ve been around 105 million gallons in March. This year we were at 89 million gallons,” Thomsen said. She expects April to hit another record.

Thomsen said the curve on water pumping has been trending lower. It has to do with better appliances; today toilets use 1.28 gallons, whereas decades ago it was closer to 8 gallons a flush. People are also conserving more water though showerheads, drip lines and other means.

Even so, this pandemic has significantly reduced the amount of water STPUD customers are using because many of those customers aren’t in business or have dramatically scaled back operations.