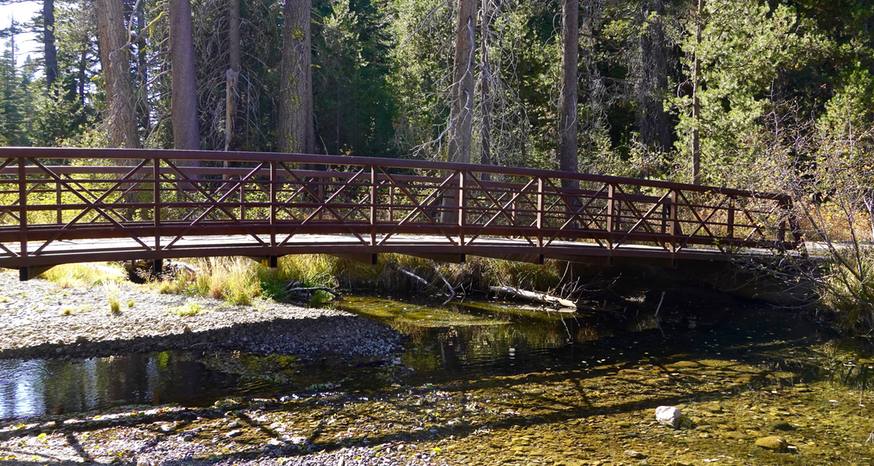 The unpopulated part is what Sugar Pine Point Campground is like in the fall once the overnight temperatures have dropped, students are back in school, and the tourists have gone. The beauty is always there.

While I would not recommend this for people in search of autumn colors, there are some to see. The few groves of aspens were an added bonus.

The number of brown ferns was indicative how much water is usually in the area.

Sue and I headed out to find Lily Pond, but instead made a loop of sorts through the park, which had us crossing General Creek a couple times. Water in late October was not flowing fast or deep. It would have been easy enough to cross it without the bridge, at least that time of year.

According to the Sierra State Parks Foundation, “In 1860, the first permanent settler of record on Lake Tahoe’s West Shore built a cabin at the mouth of General Creek. This was the trapper and fisherman William “General” Phipps, and his cabin can still be seen today just north of the Ed Z’berg Sugar Pine Point State Park pier.” 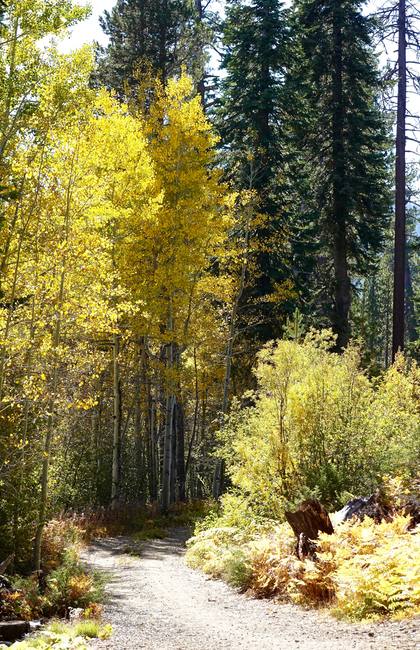 What makes this excursion desirable is the myriad paths one can take, the history from the 1960 Winter Olympics, and the fact nearly anyone could do this trek. Several signs talk about how the cross country events for the Squaw Valley Winter Games were staged in this West Shore location. These trails are still great in the winter for skiing and snowshoeing.

It’s so flat the elevation gain is negligible; with it being a near constant 6,400 feet. Much of the trail is like an old dirt road, so wide enough for two to walk side-by-side.

In all, we walked 5.78 miles that day. We logged 0.62 miles each way on a paved path from the day use parking area to the start of the dirt trail. When you pay to park ask the ranger for a map. This will help you decide which path to take.