Following in the path of cows to climb a mountain 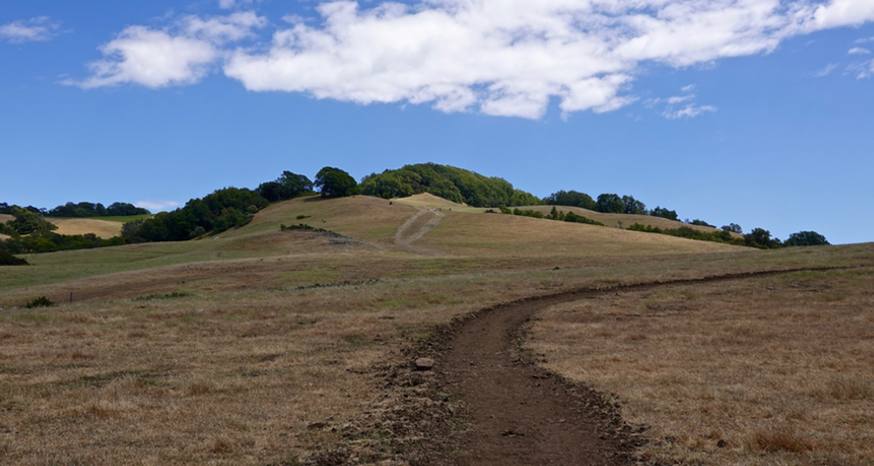 Taylor Mountain has been open as a Sonoma County park since 2013. (Image: Kathryn Reed)

Cows are smarter than people. They know on a warm day to stay huddled in a shady spot. Humans, well, they were out in the wide-open without trees nearby, with sun beating down and exerting themselves.

Fortunately for the two-leggeds, the four-leggeds are sharing their terrain in Santa Rosa. Prior to becoming a county park, Taylor Mountain was used for ranching and grazing. The grazing continues. We spotted one bovine in the trees, but plenty of patties proved more than one had been out earlier.

According to signs at the park, the benefits to cattle on the land include:

These 1,100 acres have only been a park since 2013. Funding came via the voter approved Sonoma County Agricultural Preservation & Open Space District. Today there are 6.4 miles of trails for hiking, biking and horseback riding, an 18-hole disc golf course and children’s play area. The master plan calls for 17 miles of developed trails, hike-in campsites and a visitor center. Those will come to fruition when there are the dollars to do so.

On this particular day we logged 3.89 miles, with an elevation gain of 1,068 feet. Our max elevation was 1,376, according my GPS—which was sort of at the top of Taylor Mountain. The county website shows the highest point inside the park being 1,380 feet, with the actual summit on neighboring private property at 1,403 feet. From our vantage point it didn’t appear we could go higher even without a fence. 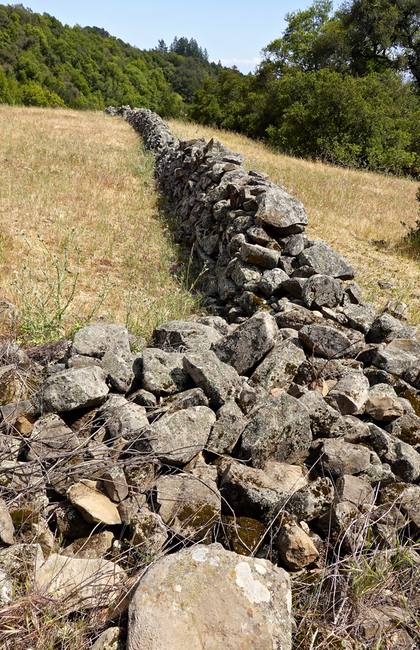 A sign at the rock wall near the summit of Taylor Mountain says it is historical, but county parks when contacted for this story provided zero information about its significance. (Image: Kathryn Reed)

Nonetheless, it’s turning around that is what is most impressive. Mount St. Helena is a strong focal point, as is the sprawl of Santa Rosa, with Sebastopol farther west. Local mountains that can be seen are the Palisades, Sonoma, Bald and Hood. Had the sky been clearer, the Bay Area peaks of Mount Tamalpais and Mount Diablo could have been seen from this perch.

We went up the Eastern Trail to get to the top. What appears to be a fairly newly graded route offers more switchbacks than the straight up approach. It’s compact dirt with several baseball-size rocks scattered about. This route was for pedestrians only, while other trails allow mountain bikes and horses.

Oak trees and wild grasses are the predominant flora, with a few wildflowers visible in May. From the grasses it was like the hills were alive with the sound of music. These were songbirds, who were good at staying hidden, chirping in the grass. Their songs were delightful.

Taylor Mountain gets its name from John Shackleford Taylor. He headed west from Virginia in search of gold in the Sierra. He then created a homestead at the base of the Santa Rosa mountain in 1853 when the city barely existed.

According to the Press-Democrat newspaper, “Taylor was an industrious man. He raised sheep and cattle, planted one of the first vineyards in the area and mined a low-grade coal seam that ran through his mountain, delivering the fuel to town by donkey train. Taylor’s property was most famous for its mineral spring. In 1862, he built a hotel and launched one of the county’s first health spas, the White Sulphur Springs Resort (later called Kawana Springs). The springs stopped flowing after the 1906 quake, and Taylor closed his resort.” 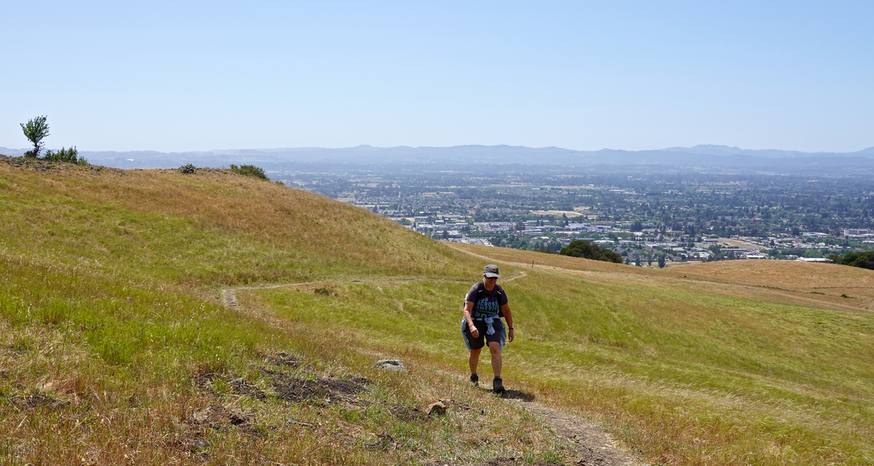 Sue, with Santa Rosa in the background, makes her way up Taylor Mountain. (Image: Kathryn Reed)