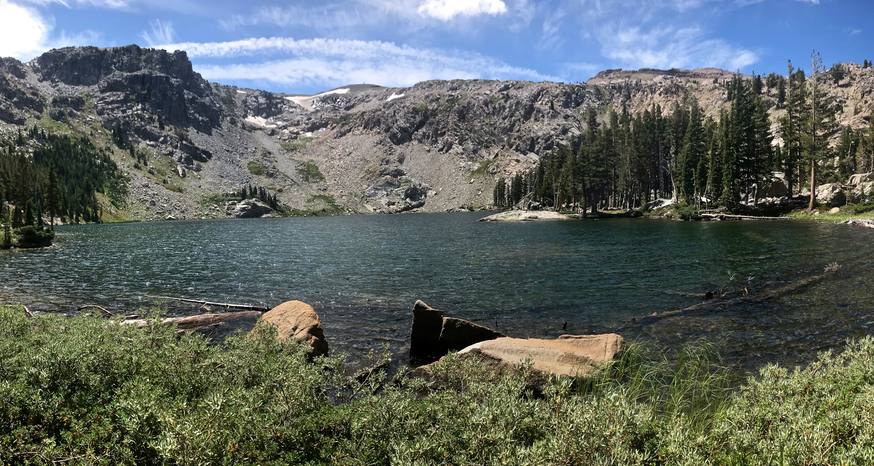 Emigrant Lake is at an elevation of 8,602 feet in the Mokelumne Wilderness. (Image: Kathryn Reed)

Impressive peaks reaching nearly 9,800 feet create a bowl effect, framing Emigrant Lake in a manner that could captivate hikers for hours. Even more remarkable, though, is the woman Melissa Coray Peak is named after.

Melissa Coray was the only woman in the 46-member battalion that was the first wagon train to go over the Carson Pass and the first to go west to east, according to the Sons of Utah Pioneers. Congress designated the Mormon-Carson Pass Emigrant Trail a national historic trail in August 1992. In October 1993, the U.S. Board of Geographic Names named the peak after Coray. The agency when naming the peak said it was to honor Coray and the “thousands of emigrant women who endured similar hardships in settling the West.”

Melissa Coray Peak at 9,763 feet is actually a subpeak of Peak 9795. Peak 9795, getting its name from its height, is identifiable because it has a small electric tower on it. From Emigrant Lake hikers are looking up to border of Kirkwood Mountain Resort. Skiers are known to venture down this back side in winter. 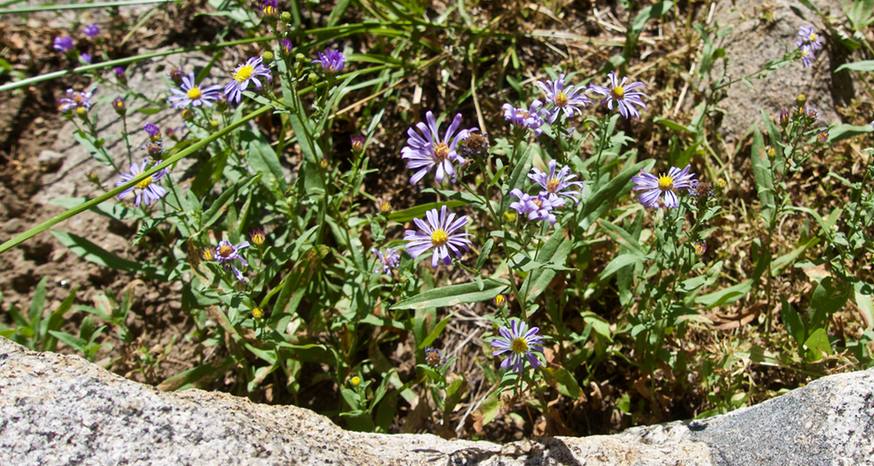 A few wildflowers decorate the trail even in mid-August. (Image: Kathryn Reed)

Hikers can reach Emigrant Lake via Kirkwood, but some bushwhacking is required. A distinct trail juts off toward Kirkwood from the Emigrant Lake trail that leads to Covered Wagon Peak (9,565 feet) and Melissa Coray Peak. The latter is on the border of the Mokelumne Wilderness.

The out-and-back trail from the Caples Lake dam is 8.2 miles. We logged 8.63 miles that day, with the extra including a side trip to the waterfall and then to our granite slabs for lunch.

Water is a feature along much of the trail, with Caples Lake being the initial focal point. Driving along this body of water doesn’t reveal her true beauty; walking it does. The shoreline is pretty and inviting, with plenty of people only going this far. The trail flanks much of the southwest edge of Caples Lake before heading due south to Emigrant Lake.

Emigrant Creek flows from Emigrant Lake into Caples Lake. At various times it is visible from the trail, or can be heard. This would be a welcome relief for four-legged hikers. With so much water, it made for lush, verdant terrain. Small meadow-like grassy areas were a delight around more than one corner, as were the fields of flowers. Even in mid-August wildflowers were still pretty and worth gawking at. It would be a great trail to explore during their prime.

Most of the trail is a gradual climb along soft dirt and decomposed granite. Some was hardpack dirt from recent afternoon rains. Most people would not need poles going up or down. It’s single track, necessitating stepping off the trail so others can pass. 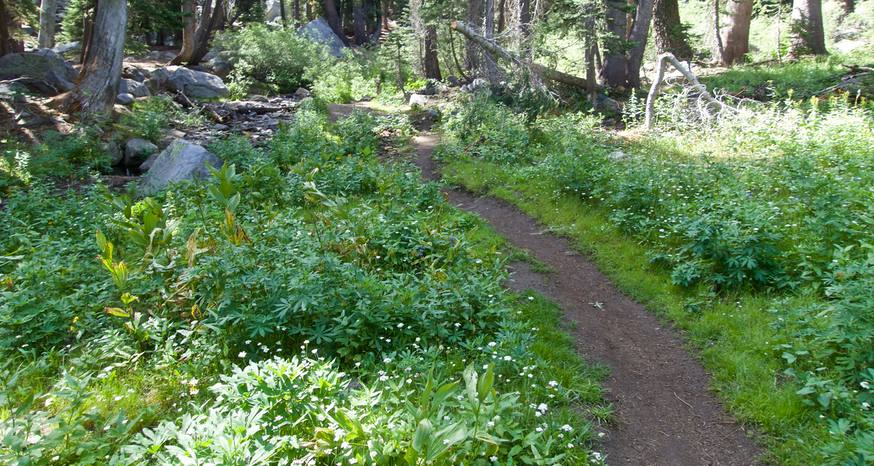 The trail from Caples to Emigrant is one most people in good shape can navigate without difficulty. (Image: Kathryn Reed)