The ocean can be a scary place for baby turtles. No parent to help them survive. They are thrust into a dangerous world where maybe 1 in 1,000 will survive.

To even make it to the water means overcoming incredible odds. Predators like coyotes, crabs, birds, raccoons and dogs like to eat turtle eggs. Once in the water they are a source of food for sharks and whales; and humans. 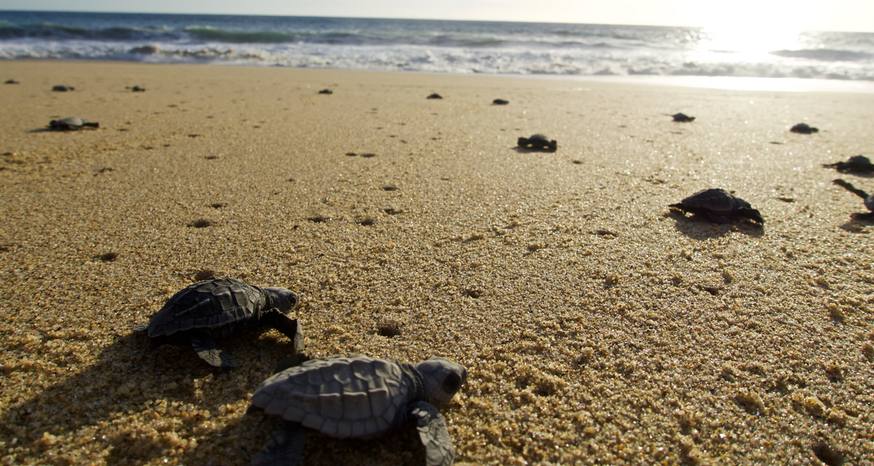 Dozens of turtles make their way to the Pacific Ocean at Todos Santos. (Image: Kathryn Reed)

Food for the turtle depends on the species; some like plants, others animals, some are omnivores.

Tortugueros Las Playitas is the more well-known entity in Todos Santos, having been founded in 2010. A greenhouse on the beach is where the turtles are incubated. 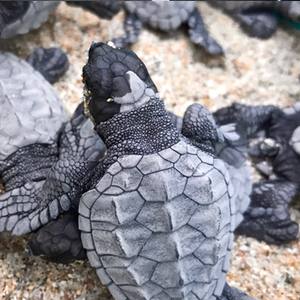 Turtles clamor over each other in the bins prior to being released. (Image: Kathryn Reed)

Volunteers scour the beach each morning for eggs. This process starts in October and can last into May. In part this is to protect the eggs from predators, and in part to bury them in warmer sand to ensure their survival.

Tortugueros Las Playitas says about 100 nests end up in its greenhouse each season. Turtles can lay more than 100 eggs in a nest and have up to eight nests a season.

Inside the enclosure wire bins are placed around the hole where the eggs were placed. This way when they hatch the turtles won’t run all over the place. Plus, volunteers record when the eggs were retrieved, how many hatched, on what day, and which species they were. 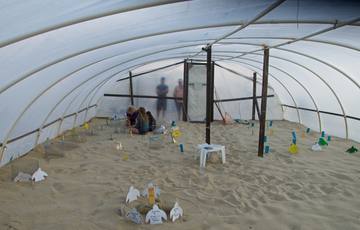 It takes 45 to 70 days for an egg to hatch. The hatchling, which is just a few inches long, must scurry to the ocean to begin its life. Mom is long gone.

Last fall Campamento Tortuguero was operating farther south on the beach. Their less sturdy enclosure was severely damaged in a storm. Today it is hard to tell anything once existed there. The nice thing about their program is that everyone who made a donation was given a turtle (secured in a coconut shell) to release.

At Tortugueros Las Playitas the turtles are in plastic bins, with only a few people doing the actual release. 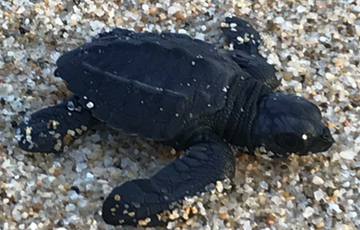 An olive ridley turtle takes its time to get into the ocean. (Image: Kathryn Reed)

However, an advantage to Tortugueros Las Playitas is that the people doing the work speak English. In addition to donations, they also have clothing and books for sale to help the nonprofit operate.

To see these tiny creatures waddle to the water is incredible. People at the releases become like a cheer squad, rooting for them to make it to the water – and hopefully survive for years to come. Just to get to the water looks like hard work.

Most sea turtles are endangered because they have been hunted and their eggs poached. While there are regulations in place throughout the world to protect these creatures, there will always be those who break the law.