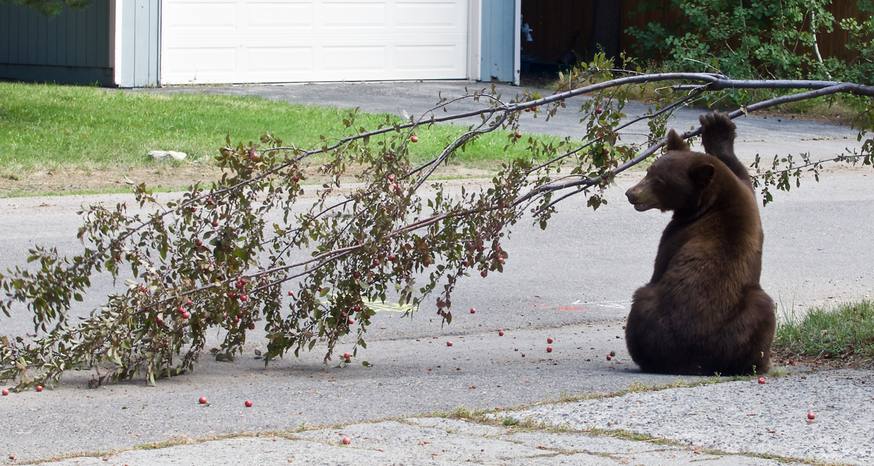 A bear in South Lake Tahoe fills up on cherries. (Image: Kathryn Reed)

Humans have a way of interfering with the food chain for wild animals beyond leaving garbage out. The addition of unnatural food sources like bird seed is one way, other ways are via water sources like bird feeders and pools. Compost and livestock are other disrupters.

Add in non-native predators like cats and dogs and the system can get really out of whack. Buildings and habitat degradation also contribute to the problem.

“All of this can change animal behavior,” said Jessica Wolff with the Nevada Department of Wildlife. NDOW earlier this month hosted a webinar about the food chain titled “You are what you eat.”

It’s not just birds that are eating the seed people put out. Coyotes, bobcats, rodents, snakes and bears all find it tasty. Another issue is that birds are starting not to migrate because they can find food year-round when people provide it.

One reason mule deer love urban environments is because of all the ornamental flowers available in people’s yards. 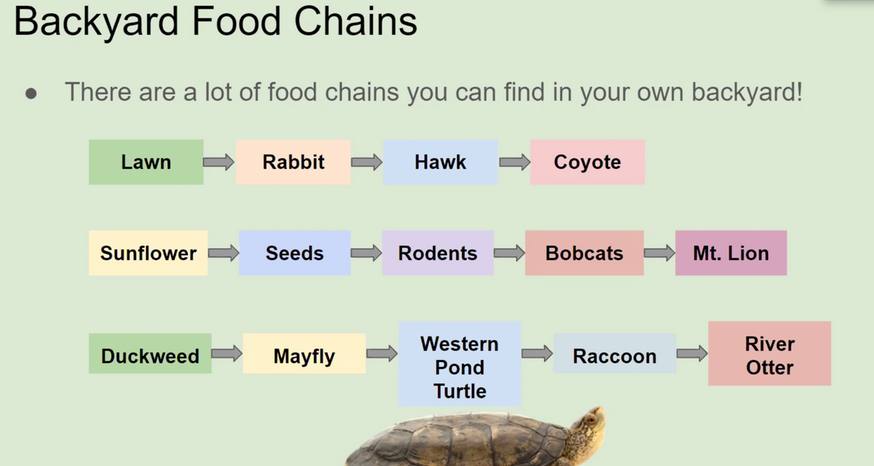 There is a hierarchy in the animal kingdom when it comes to who eats whom. (Graphic: NDOW)

Participants were asked how much they and their families affect the local food webs. Twenty-five percent said not at all, 33 percent said a little, and 42 percent said a lot. Every home is taking up land that once was home to some other creature, so everyone is affecting the food chain. Fences limit travel. Human noise can be an issue, as well as lights at night.

NDOW officials stated how most places in the wild coyotes hunt during the day. Not so around the Lake Tahoe area and other parts of Northern Nevada. They are more nocturnal and eat human food. Even though Nevada is one of the driest states it has plenty of coyotes. This is because humans have put out water in the form of pools and bird baths.

While wildlife is wonderful to observe, it’s best not to encourage coyotes, bears and other animals to be comfortable in neighborhoods. Eliminating food sources, including garbage, is the first step. Scaring them away is also suggested by wildlife officials. The whole goal is to keep all animals wild.