We had a vague idea of where we were going, then let intuition and strangers help guide us.

This was fortuitous because two women asked us if we were headed to the old redwood. We wondered, “What old redwood?” And off we went at their urging.

“After logging the old-growth forest, this 14-foot diameter giant redwood still stood. Often referred to as the Grandmother Tree, it is estimated to be 1,800 to 2,000 years old,” according to Jack London State Historic Park’s website. “Although the coast redwood is the tallest living thing in the world, this particular tree is wider than it is tall and therefore does not tower over the forest canopy.”

She is worthy of a visit. In some ways she looked like something that might reside at Hogwarts because of how some of her limbs are growing. Nonetheless, we were happy to make the short side trip on this late September hike. 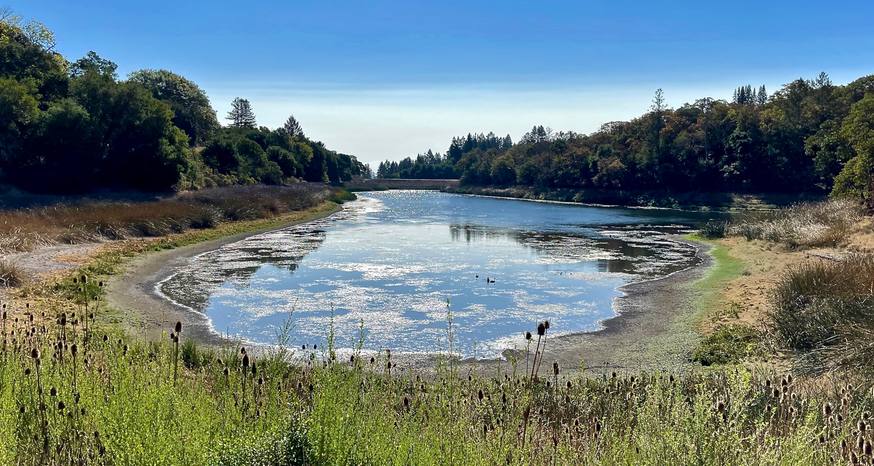 The four of us started the morning at the Sonoma Developmental Center. Even though it is now shuttered, we abided by the signs saying only state vehicles beyond a certain point. We walked up the paved Orchard Road until we could veer right onto dirt paths that led us to the 13-acre Fern Lake, which is just outside the boundary of the state park.

Then we meandered a bit west onto the trails of Jack London State Historic Park. This area is south of the main park entrance where the historic buildings are located. Having been there a few times, I thought a different starting point would be fun and interesting. Looking at a map, I realize I’ve barely scratched the park’s trail system. 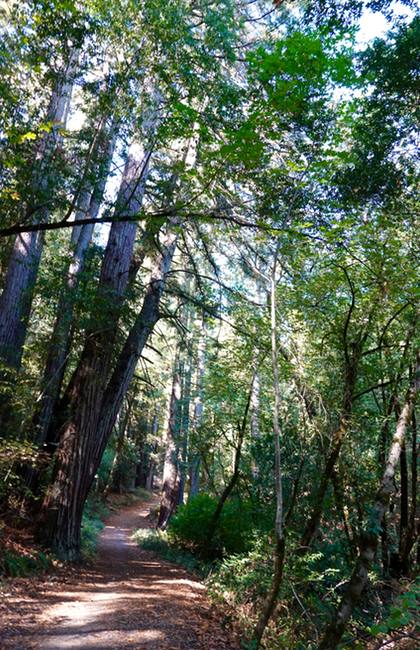 With so many leaves on the ground and needing to start off with long sleeves, we had definitely transitioned to fall.

A mix of flora dotted the trail and surrounding forest—pines, oak, ferns, and the aforementioned ancient redwood among others. The canopy provided shade on the dirt trails, while the paved area was exposed.

The parched earth was most dramatically in evidence on the last path we selected to go down. Cracks in the dried dirt made it look like the ground was crumbling in large chunks.