Lake Tahoe spills forth from top of Cave Rock 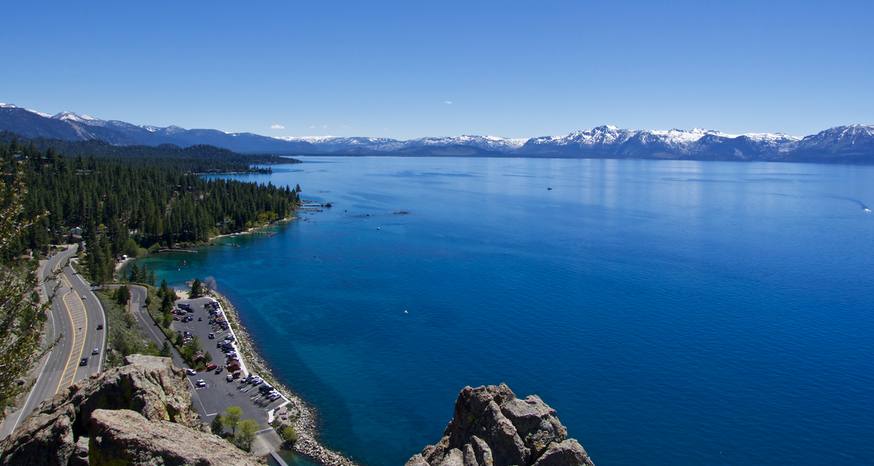 From the top of Cave Rock looking south, with the boat ramp in the foreground. (Image: Kathryn Reed)

Cave Rock at 360-feet-tall and 800-feet-around is more than a tunnel allowing fluid travel on Highway 50 in the Lake Tahoe Basin. From the top is one of the best views of the lake. It also remains a symbol for the Washoe people who once occupied all of this land before white men took over.

While it’s less than one-half mile to the top, this isn’t a hike for everyone. This is because it’s a bit of a scramble up and down. Free hands are necessary to grab rocks. It’s important to pay attention in both directions because there are several routes, with some seeming a bit trickier than others. (The base of the rock offers good views and could be accessed by most people.)

The reward from the top is incredible unimpeded views up, down and across the lake. In late May plenty of snow topped the mountains on the West Shore. The boat ramp at Cave Rock was full. With a limit on who could launch, the lake was not as busy as it could have been.

While granite dominates the basin, this is an example of volcanic activity. Geologists say it was created about 5 million years ago. The caves in the rock, which is how it got its name, were created by waves crashing into it. This was 70,000 to 120,000 years ago when the water level was much higher. 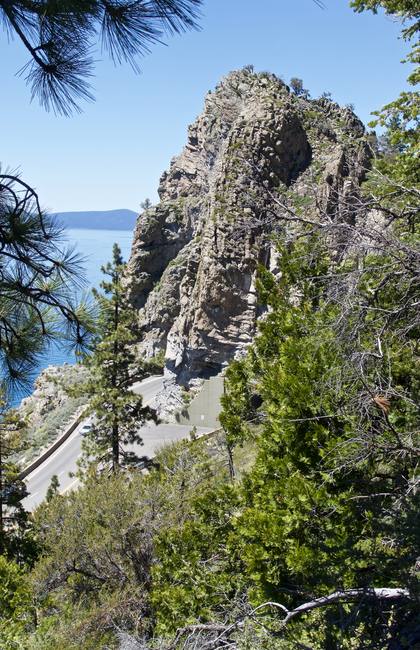 Long before the tunnels were built people walked around the rock and then wagon trails were created. For the first 26 years after the initial bore was created in 1931, eastbound traffic went through the tunnel, while westbound travelers traversed on the outside of the tunnel by the lake. Both directions of travel used the tunnel when the second bore was blasted.

While the Washoe didn’t have the power to prevent the tunnel bores from being drilled in 1931 and 1957, they were triumphant in stopping rock climbers from continuing to desecrate the monolith. The U.S. Forest Service, which now owns the rock, on Feb. 9, 1997, issued a “temporary closure order for archaeological protection.” This meant no more rock climbing. Reports are that at one time 46 climbing routes existed. Each came with hundreds of bolts and other devices associated with the sport. All climbing was prohibited as of Sept. 2, 2003. In August 2007, a federal appellate court upheld the Forest Service’s ban.

Before the Nevada Department of Transportation spent $5 million to improve the tunnel in 2016, officials met with the Washoe people. At that time 62 feet were added to the tunnel, making it 227 feet long.

“NDOT invited the tribe to come up to meet with the project construction crew when they come up with a date for the start time so the tribe can talk to them to explain how it is a sacred site and not just another job,” Darrel Cruz with the Washoe tribe said at the time. Cave Rock has been used by medicine men and there are other stories associated with it, he added. For some people, they won’t go near the rock because of the power it holds. 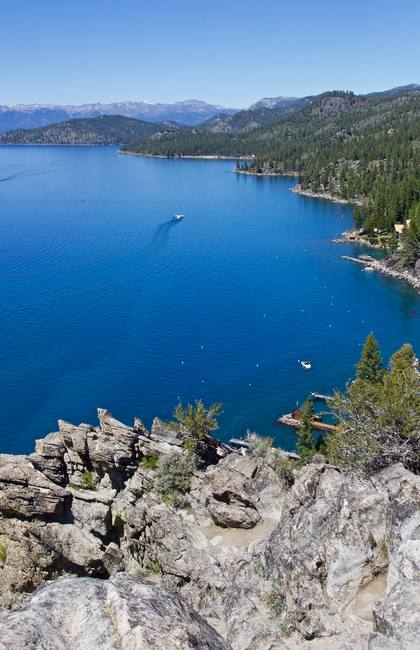 Looking to the north from atop Cave Rock. (Image: Kathryn Reed)