Legality of driving on Mexico’s beaches a bit murky

With miles of sand, the beaches in Mexico look like a four-wheeler’s dream. Many are so wide that if a vehicle were to drive by, it would likely not bother the people using it in some other fashion.

The problem is the federal law in Mexico prohibiting driving on the beaches is not consistent. According to an ATV tour operator in Baja California Sur, the federal law states people cannot drive a vehicle within 20 meters (65.6 feet) of the high tide line. States and municipalities can have their own laws. A Los Cabos area turtle preservation group says regulations are based on the ecological interest of a particular beach.

When people are in violation of illegally driving on a beach in Mexico the penalty includes a stint in prison from six months to six years, along with a fine of $127,000 – that’s U.S. dollars, not pesos. 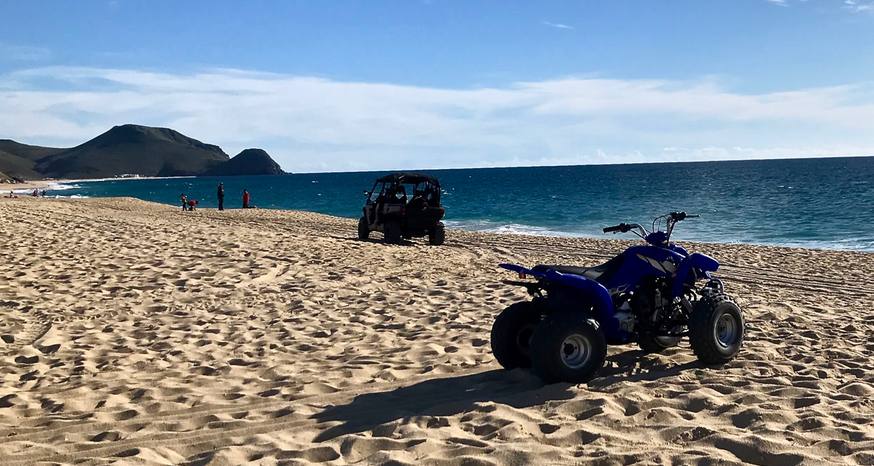 Driving on the beaches of Baja Sur is common, even during turtle season when it’s illegal. (Image: Kathryn Reed)

A tourist ATV rental company based in Todos Santos that didn’t want to be named said, “Like most laws here in Baja it’s not quite as straight forward as ‘it is illegal to drive on the beach anywhere.’ There are leeway’s and allowances, but the clarity on them is somewhat foggy depending on where you pull your information from and what municipalities you’re in. That is why you hear a lot of people just tell you it’s flat out illegal. It’s easier to say that as opposed to trying to make people understand just exactly where the high tide mark lies.”

Fun Cabo out of Cabo San Lucas touts riding on the beach, with pictures of people doing so on its website. An employee from the company was asked about the legality of riding on the beach. “It depends on which beach you go to. The public beach you would not drive on. But many of the regular beaches that no one goes to you can drive on.”

Gringos and Mexicans are guilty of beach driving. Most do so on quads or some other all-terrain vehicle. Sometimes it’s faster to drive on the beach than regular roads. No traffic to contend with, plus getting from Point A to Point B can be more direct. At least those are the reasons people use for driving on the beach when they know better. 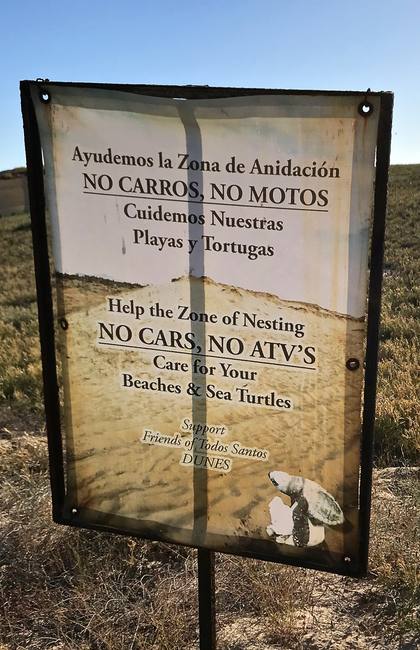 Tire tracks prove rare signs like this one are ignored. (Image: Kathryn Reed)

It is hard to find signs in the greater Todos Santos area telling people not to drive on the beach. Like any law, it’s incumbent on the person to know the rules. They don’t have to be posted to be real or enforced. Data about citations for anywhere in Mexico could not be found.

In Los Barriles on the East Cape there is a section of beach farthest from the Sea of Cortez where vehicles are allowed. It’s distinct, with signs telling drivers what is OK and what isn’t. Those signs appear to be ignored more than followed.

Environmental/ecological reasons are cited for the “no beach driving” rule. Turtles lay their eggs in the sand, which can be crushed by a tire. Birds also have nests on the sand. Various plants grow along the farthest reaches of the beach from the water. These get trampled by tires as people come and go to the beach. Erosion can be a problem. Then there is the noise and air pollution emitted from any vehicle which are both harmful in various ways.

People who want to file a complaint against someone driving on the beach should send an email in Spanish to atencion.ciudadana@semarnat.gob.mx. The Mexican Ministry of the Environment and Natural Resources has offices at City Hall in San Jose del Cabo. This document has more legal information, which can be used if people wanted to get a petition together to take to SEMARNAT, the government body with oversight of beach driving.