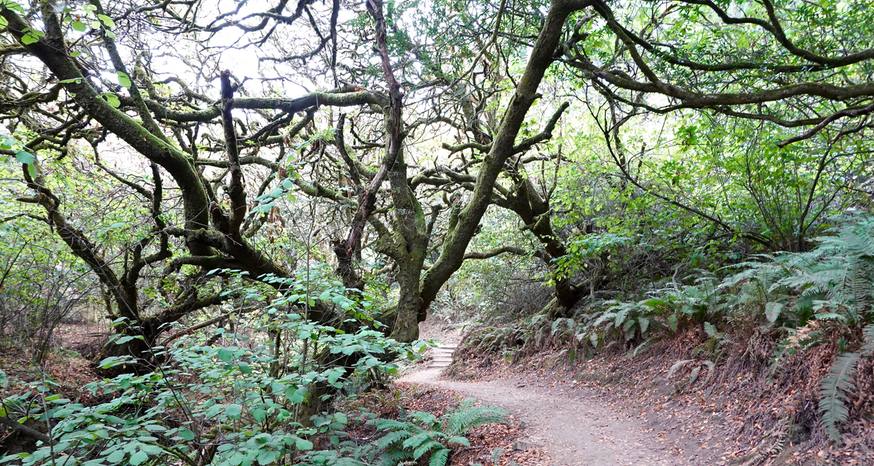 It was like two hikes in one—first being surrounded by verdant green flora, then descending through dry grasses and oaks.

It didn’t matter that we started in fog because the tree canopy was so thick it was hard to know there was even a sky above us. It was damp, almost humid in this majestic wooded area of Mount Tamalpais State Park. Moss covered tree branches, ferns were at our feet, while redwoods and bay trees provided a canopy. 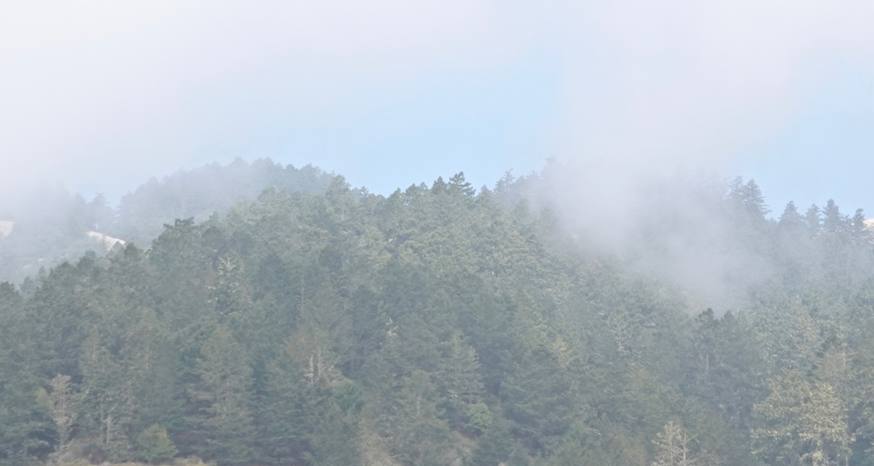 The sounds of Webb Creek followed us most of the way up. It was rather amazing to have so much water flowing on Labor Day weekend. Multiple bridges cross the creek. On the route down we crossed numerous dry creeks–or maybe sections of the same creek, and areas that looked like the trail would definitely be wet in the rainy season or early spring. The landscape also looked like there would be waterfalls when it rains again.

My legs felt the climbing the next day; mostly because of all the stairs involved. The nice thing is they were not made out of granite, which is what I’m used to. The compact dirt trail was rather gradual. 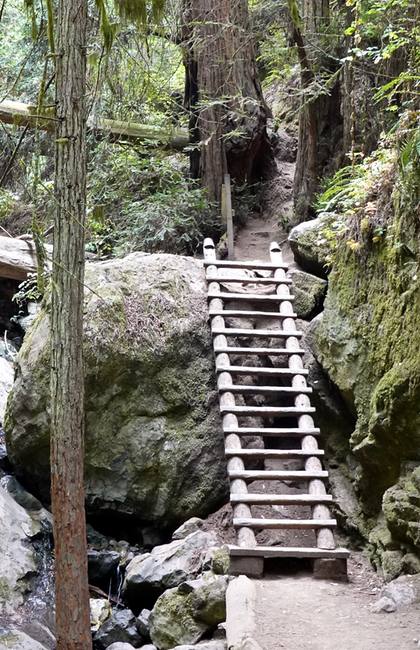 There is only one way up … or down. (Image: Kathryn Reed)

An interesting obstacle was the necessity to climb a ladder in the first section of the route. I was glad we encountered it on our way up instead of having to climb down it.

This is definitely not a hike for those with bad knees.

The route we took was devised by our leader Harold from the Chico Orville Outdoor Adventurers group. This was his description of the hike, “This popular hike departing from the town of Stinson Beach, strung together from the Matt Davis, Steep Ravine, and Dipsea trails feature a bit of everything, with waterfalls (not in September), redwood, Douglas fir, and oak forests, grassland, canyons, and views galore. These three trails are some of Tam’s best, and combined them into one hike intensifies their pleasures.”

Sue walks along the exposed area of the route. (Image: Kathryn Reed)

We seemed to startle three coyote cubs near the start of the trail. A few chirping birds were our only other wildlife encounter.

After lunch it like a different world with more expansive terrain and the occasional oak. Fog muted our view to the ocean, but there was plenty of wonderful scenery worth pausing for.

By the end of the hike we had finished a 7.57-mile loop; starting and ending in the town of Stinson Beach in Marin County. The GPS registered the start at 27 feet, with our highest point 1,631 feet.