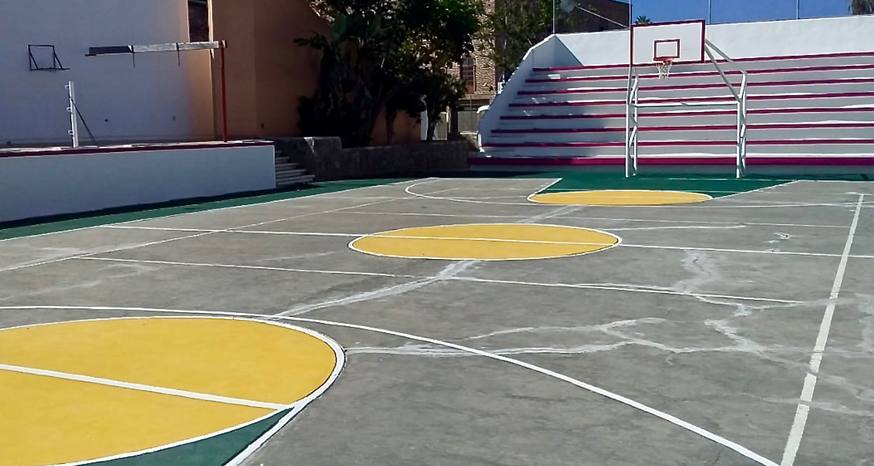 One man from the U.S. used his own money to furbish the Todos Santos auditorium. (Image: Al Arechiga)

A fresh coat of paint can do wonders to just about anything. One-hundred and 10 gallons can be transformative. That’s the case with the auditorium in Todos Santos.

Thorp Minister took it upon himself to refurbish the multi-use facility near downtown. It would be easy to miss this outdoor playground because it’s walled and behind doors. The auditorium was built in 1972. While initially there were plans to put a roof on it, that never happened. Typically, it’s open to anyone from 6 am to 11 pm, with the day starting by people doing yoga. It’s busiest after 5 pm when locals get off work. Boxers can be seen sparring and training on the stage, while kids play soccer, and groups of guys use the full basketball court. Ceremonies like graduations are conducted there as well as other events.

When Minister moved to this Baja California Sur town nine years ago from Las Vegas he noticed the auditorium was a bit dilapidated and decided to start by painting part of it. He ran out of time and money, with health issues taking him back to the United States. He returned June 15 as soon as air travel was permitted. This go-round he was determined to finish the job. Nearly everything he wanted to do was completed Sept. 5. 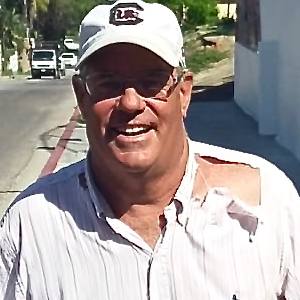 He used his own money—the exact amount he would not say. It was six figures in pesos, five figures in U.S. dollars. On average three people helped with the work each day for 12 straight weeks. Most were volunteers, including several from the ministry. A few got paid, including the welder who attached the rims to the backboard. The new backboards are three-quarters of an inch thick compared to the old ones that were one-half inch. Those were reinforced because the players like to hang from the rim to celebrate their dunk.

Divots in the concrete were filled in and smoothed out by a professional laborer, which should reduce the number of sprained ankles. Six new lights will make playing at night easier.

Manuel Letayf was the master painter on the project, doing 90 percent of that job. He rolled 22 gallons of paint on the refurbished concrete floor in two weeks. The white, yellow, green and purple standout compared to the chipped paint that was there before.

“The surface was so hot the paint would bubble. We had some issues putting it on concrete,” Minister said of working in the heat of August. “Around the perimeter of the basketball court we used 20 gallons of paint that had sand and plastic in it so if it rains, you won’t be slipping around. It has a good bite to it. We used the same paint for the basketball lanes.”

For Letayf, the painting wasn’t the hardest part, the prep was—cleaning all the trash. Broken glass was on the basketball court, bubble gum under the bleachers. “People had used it as a bathroom; all around the auditorium.” 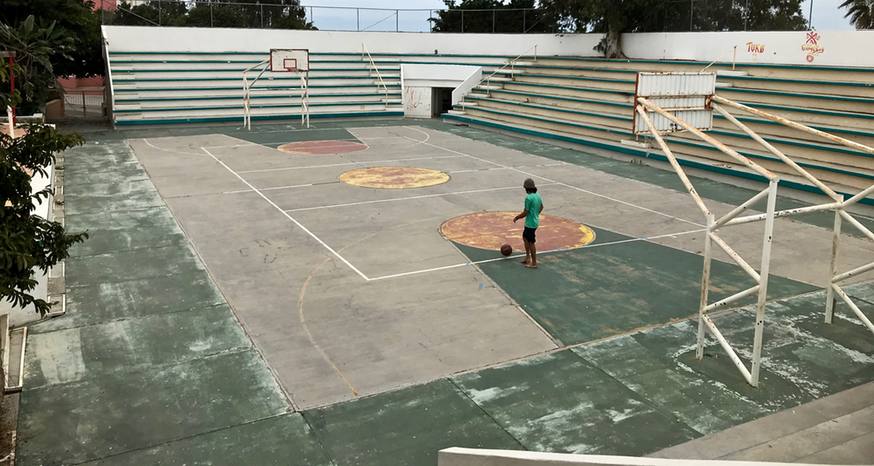 This is what the auditorium looked like earlier this year. (Image: Kathryn Reed)

Minister brought in a porta-potty while the work was going on. He’s working on a deal for one to be on-site permanently. He is also adding three garbage cans to the auditorium in hopes people will use those instead of leaving trash on the ground.

In all, 92 palm trees were trimmed. This included at the auditorium, in the plaza, by the church, police court yard, and cultural center.

“The most important thing now is young people here take advantage of this and take responsibility for maintaining it,” Minister said. “Often times they bring water bottles and leave garbage behind. They need to take pride in the facility and do their part to maintain it. I think this facility will look really nice for seven to 10 years if it’s maintained on a daily basis.”

Asked who is going to oversee the maintenance, he said, “The delegado is going to have to figure that one out.” He believes it will take one to three hours of work a day to keep it pristine. This means picking up cigarette butts, trash, sweeping, trimming trees and whatever else comes up.

The mayor, Tito Palacios, didn’t put a dime of the city’s money into improving the facility. Nor would he comment for this story.

Rules for the refurbished auditorium are: