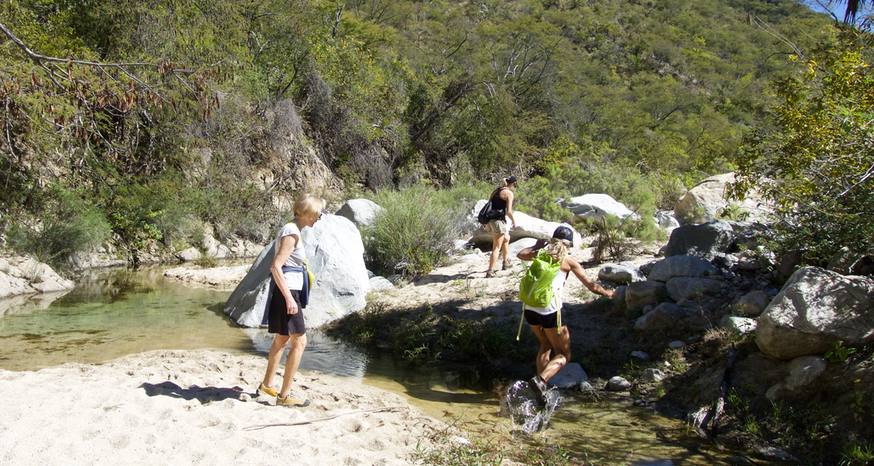 Chris leads May and Pat across the water to where the trail continues. (Image: Kathryn Reed)

Finding water in the desert, even headed into the mountains, can be a challenge, especially when the rainy season ended months ago.

We were determined. It only took two outings for success. 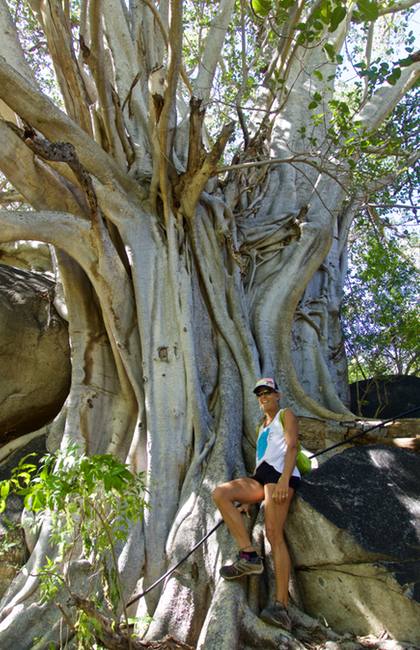 May stands next to a tree that looks like something out of Harry Potter. (Image: Kathryn Reed)

Seeing flowing water made the trip worthwhile. At that point a waterfall would be a bonus. While photos don’t effectively prove we reached the waterfall, we all saw one in the not too far distance. Those waters then ended in the pool where that section of the trail ceased. We never found a way to get closer to the actual waterfall.

On this excursion it was me, Pat, May and Chris. The aborted one include Anna instead of Chris. Anna is the one who knew a waterfall existed, and had been told by others that her sons could do the hike. Once we started going up a steep, single-track trail we were all whining a bit, so no way kids could do it. Clearly, this was not the route to the waterfall. We don’t know where we would have ended up. Around the next bend was another false summit with no relief to the steepness. We eventually turned around; still, it was a wonderful outing.

These trails are not built to any standard that one might be used to in the United States. Many are working trails for the ranchers. Wide enough for a horse, which apparently doesn’t mind the incline. Bells rattling signaled when the cattle were nearby; this was in the flat areas. 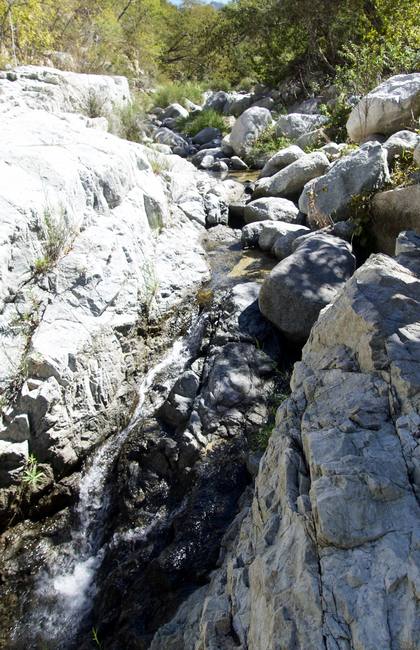 Flowing water in February is not a guarantee. (Image: Kathryn Reed)

On the successful excursion we opted to drive in as far as we could. This meant instead of stopping at the gate, we let ourselves through. This saved us a couple miles. While four-wheel drive was not necessary in February, it might be nice to know you have it just in case. At the end of the route we had done 6.67 miles, with an elevation gain of 807 feet. Our minimum elevation was 1,595 feet, the maximum 2,415 feet.

The first hike had us make a distinct left at a sign pointing toward the Sierra. That’s where we went wrong in terms of finding a waterfall. What it provided was vast views of the mountains, with the dry river bed looking like a stripe of grey-white paint through the valley floor. 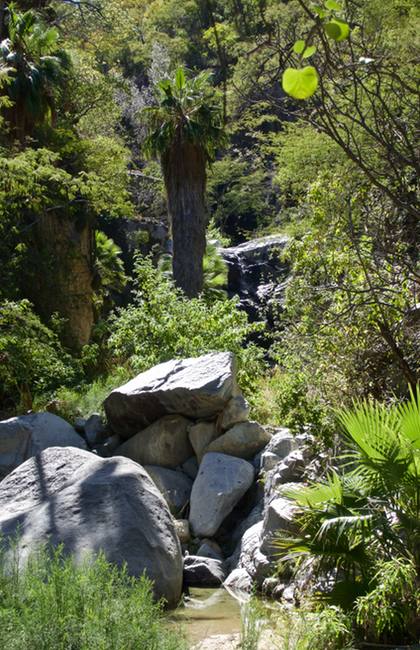 In the distance is a waterfall that flows into pools in the Sierra de la Laguna. (Image: Kathryn Reed)

On the second hike we traipsed through those rocks a few times, and even crossed water more than once. While we had to check in with each as to the exact way to go, most of time the trail was distinct. The route is a mix of packed dirt, loose sand and uneven rocks. At times the foliage is dense, providing shade, while other times you are totally exposed to the sun.

It is so green in the mountains, with yellow, purple, white and red flowers sprouting. While mountain lions and snakes call it home, birds and bugs are all we saw.

A few laminated signs pointed toward a poza at various junctures. These were pools of water in the stream. The water was cool to the touch, but far from unbearable. Still, none of us considered getting in.

Our luck with finding water probably had something to do with the unusual rain that came down in early February. The Sierra de la Laguna mountains always get much more rain than Todos Santos proper. The town averages 6 inches a year, with most of it coming in late summer during hurricane season.

We’ve only checked off a fraction of the nearly 278,000 acres of terrain in this protected area. 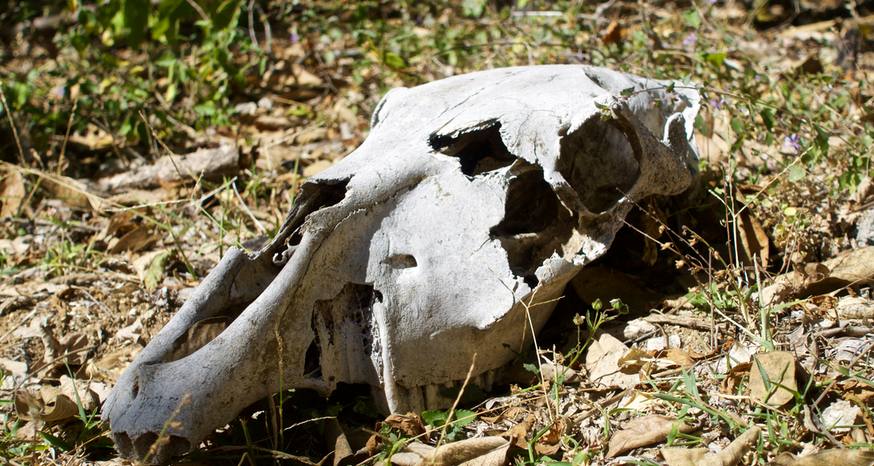 Not all creatures make it out of the mountains alive. (Image: Kathryn Reed)