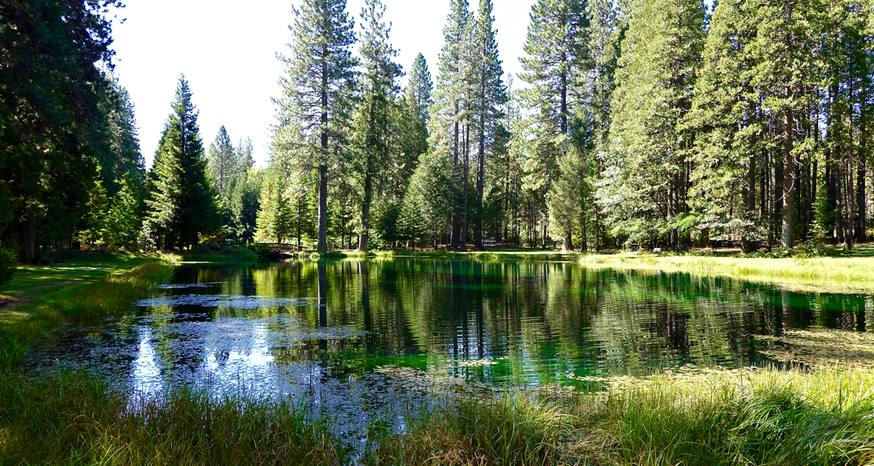 Merlo Park is tucked away in a remote area of Butte County. (Image: Kathryn Reed)

A 20-acre oasis of tranquility awaits those willing to make the drive to Stirling City.

This Butte County town with a population of 374 people is home to a majestic private park at an elevation of 3,500 feet.

In May and June the wildflowers are said to be magnificent. 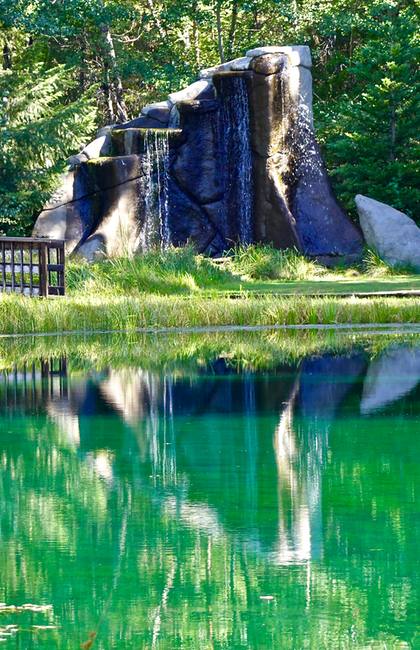 A man-made waterfall at the park. (Image: Kathryn Reed)

Our leader Marjorie was correct in calling this a peaceful place to enjoy nature, as we embraced the solitude.

Three ponds on the grounds are pumped and the water recycled. Paths are gentle as they weave around areas that are more developed, and some that are wooded and more natural.

Small statues of children are placed throughout the park. The caretaker told our group these were bought by Harry Merlo to commemorate his childhood. One shows a boy with a dog, another is a child fishing, one is of a kid playing ball.

Placards are next to trees that have been planted in honor of someone who has died, signifying how important this park must have been to that person and their loved ones.

Harry A. Merlo dedicated the park to his late mother, Clotilde, in 1987. She had died in 1962. Clotilde had immigrated to Stirling City from Italy. The park is near where Harry grew up. This is where the Diamond Match sawmill used to be. 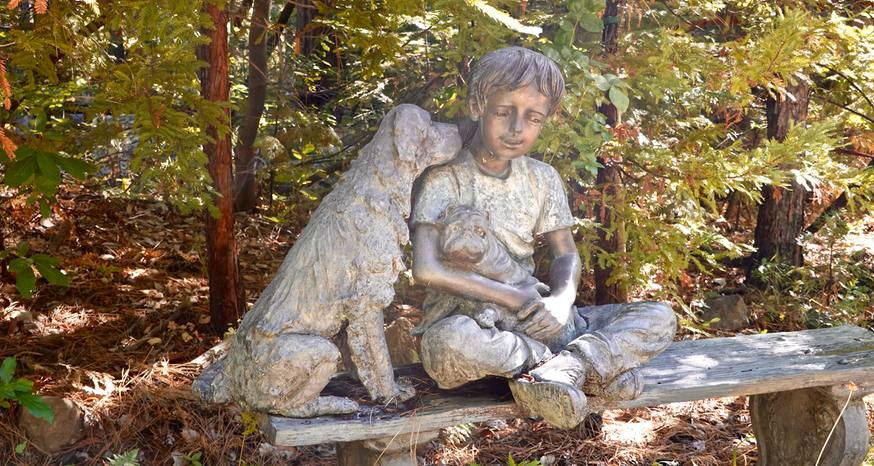 One of the many statues scattered about the park. (Image: Kathryn Reed)

Growing up in a lumber community it’s not a surprise that he became an executive of Georgia-Pacific. When Louisiana Pacific spun off from Georgia-Pacific, Merlo became the CEO of LP, a position he held from 1973-95. At that time LP was headquartered in Portland, which is where Merlo spent most of his life. Merlo died in 2016 at the age of 91.

Today the park is run by a nonprofit foundation. There is no cost to visit, though it is not open in the winter. It will close this season on Oct. 17, and will reopen on Mother’s Day.

The park’s Facebook page says, “Coltilde was a war widow who came from Italy in 1920 with her small son, Pete. She met and married Joseph Merlo, also widowed with two small children, Caroline and Amiel. They had three sons, John, Harry and Frank. She was the foremost teacher in her children’s lives as well as running a boarding house for Joseph’s co-workers from the nearby sawmill. After WWII, she moved to Berkeley with her three youngest sons where she worked to help them through the university.”

A plaque at the park says, “It is the intention of the Harry A. Merlo Foundation that this park bring peace, tranquility and dignity in remembrance of the many emigrants who, in the first decades of the 1900s, settled in the community of Stirling City.”