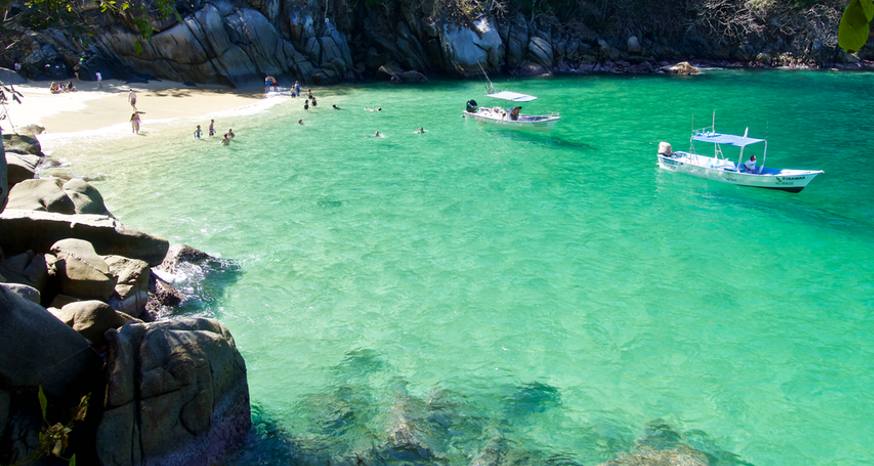 Jungle, rugged coast, spectrum of ocean colors, sand, dirt, stairs. All of this is what one will encounter on the hike from Boca de Tomatlán to Los Colomitos and then to Las Ánimas.

While the scenery is incredible, one of the best parts about this excursion in Puerto Vallarta is the only way to get to the two stops is via foot or boat. We hiked there, got a ride back.

Puerto Vallarta and this trail are within the confines of Banderas Bay on the Pacific coast. 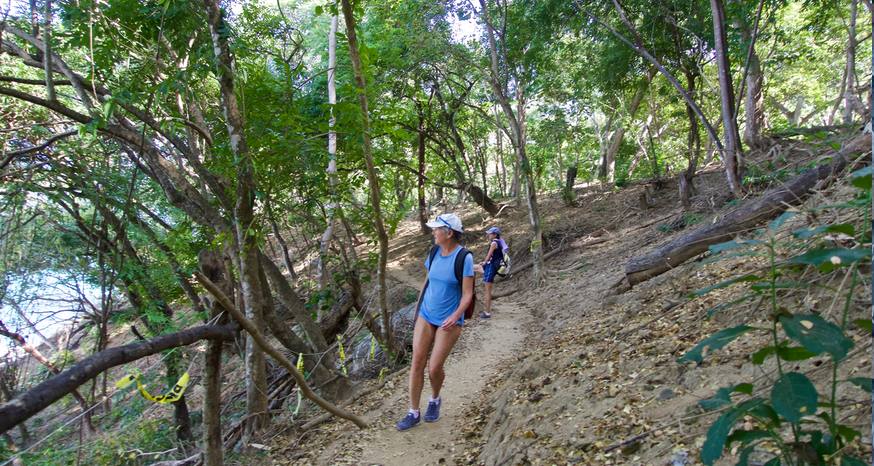 Rhoda and Liz enjoy the scenery along the 2.5-mile hike. (Image: Kathryn Reed)

The bus ride alone is worth the experience to get out of the hustle of the city. When the bus stalled, the driver got out, put the hood up, worked his magic, and off we went. It was another Mexico experience. I’m sure the unions in the U.S. don’t even allow bus drivers to look under the hood, let alone try to get the machine going again.

Starting off from the tiny fishing village of Boca de Tomatlán we crossed the Horcones River, where we then skirted along some dwellings before the trail truly began. The route is well marked, with my friends Rhoda and Liz saying how signage and the trail itself have improved in the time they have been making this trek. 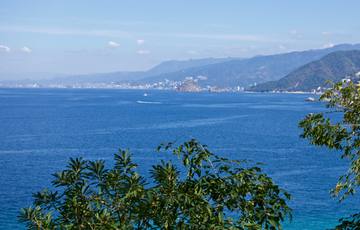 At times we were in what seemed like a jungle with the lushness of the foliage. The trail swerved and the ocean spilled forth. At times waves crashed against the rocks below, other times the water was more tranquil. The hues were reminiscent of Lake Tahoe where it can go from aqua green to sapphire blue.

Most of the trail is single-track dirt, with some ups and downs along the way. Two of us said no to poles, one said yes. It gets a little narrow in sections, with drop offs that would make poles a comforting asset.

Las Ánimas has plenty of choices for food and libations. (Image: Kathryn Reed)

Before we knew it Los Colomitos was before us. Boats were anchored just off shore, as people splashed in the clear water. The soft sand led us to warm waters. Along the south side were rocks where the fish were hanging out. So much fun to watch them with the snorkeling equipment we brought with us.

After warming up in the sun, we packed up for the last section of the hike that would take us to Las Ánimas, our lunch stop. We stayed in our suits, knowing the option to swim and jump off the pier were real possibilities at the next stop. 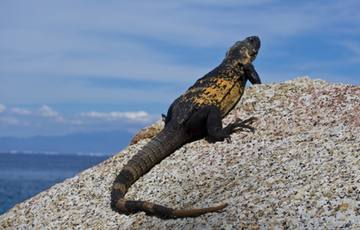 An iguana wants nothing to do with the passing humans. (Image: Kathryn Reed)

Las Ánimas is where the party is, with tourists and locals frolicking in the sand, water and at dining establishments. The beach is lined with restaurants, with hawkers trying to lure people in for a bite and a beverage. We opted to stop at Mike’s, which was a good call. Fajitas became more than one meal, and one margarita had one of us (not me) acting pretty happy. (Veggie fajitas, beer and tip = $7.50-ish.)

Rhoda had an in with one of the larger boats, so we were able to get a ride back to Puerto Vallarta, which shaved off a lot of time.

This is a hike anyone in decent shape can make. Be sure to have your suit on because there are no changing facilities at the first swimming hole. 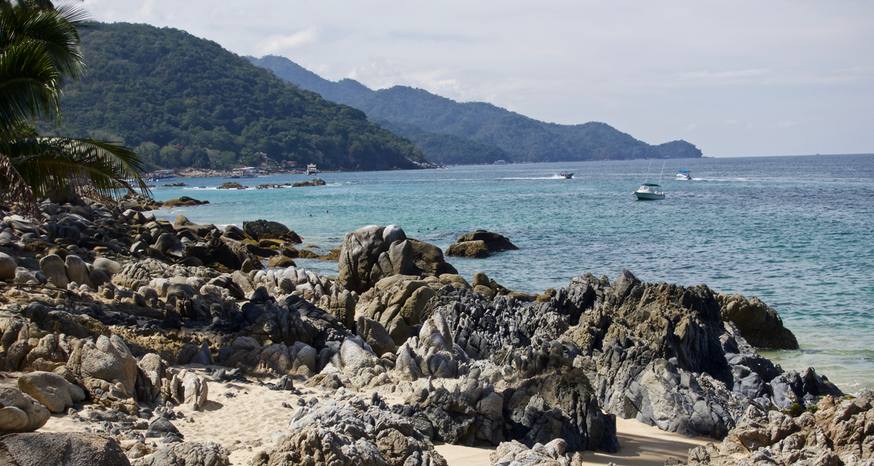 This section of coast on the mainland of Mexico is a mixture of rocks and sand. (Image: Kathryn Reed)