The road seemed to go forever with a headwind that made it feel like I was sitting still instead of pedaling forward.

I was afraid it would never end. 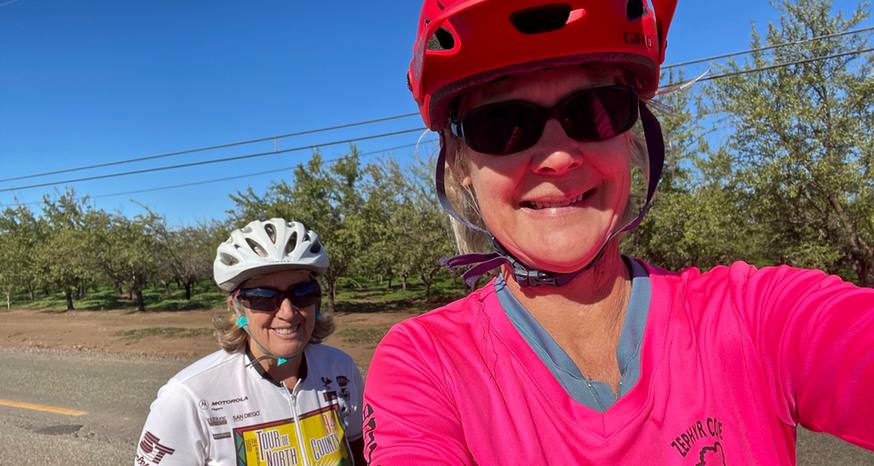 Sue and Kae cycling through the orchards on the outskirts of Chico on Nov. 7. (Image: Kathryn Reed)

Amazing what a difference a 90-degree turn can make. Suddenly I was moving. A smile crept across my face. It also helped that the rest stop was in sight so I could refuel for the final push.

In November, Sue and I participated in a fund-raising ride for Chico Velo, the local road bike group. It had been years, probably well more than a decade, since I last rode more than 30 miles.

Incredibly, I wasn’t sore afterward. A flat 32.5-mile course at sea level had a lot to do that. Hills and elevation might have done me in.

I own two bikes, but don’t profess to be much of a cyclist. This made me want to get out on my bike more. We’ll see if that actually happens.

I have visions of doing the Wildflower ride next spring in Chico. There are 120- and 100-mile routes, along with shorter ones.

I’ve done one century in my life—the 2008 Mammoth ride. That was a killer. It started at about 7,900 feet and only went up from there. People in the know say if you can finish the Mammoth century, you can do the annual Death Ride in the Sierra. My ego likes thinking that is the case. In other words, I’m never going to do the Death Ride. I’m just going to assume at one point in my life I could have based on having done the Mammoth century.

For those who don’t cycle, a century ride is 100 miles.

This local ride was to raise money so the club will be able to put on the Wildflower ride. It’s a 40-year tradition in Chico that has been knocked off kilter because of the pandemic. Bicycling magazine has name the ride one of the top 10 centuries.

I need to get back in the saddle and start finding some hills so I’m ready to do more than smell the wildflowers next April.