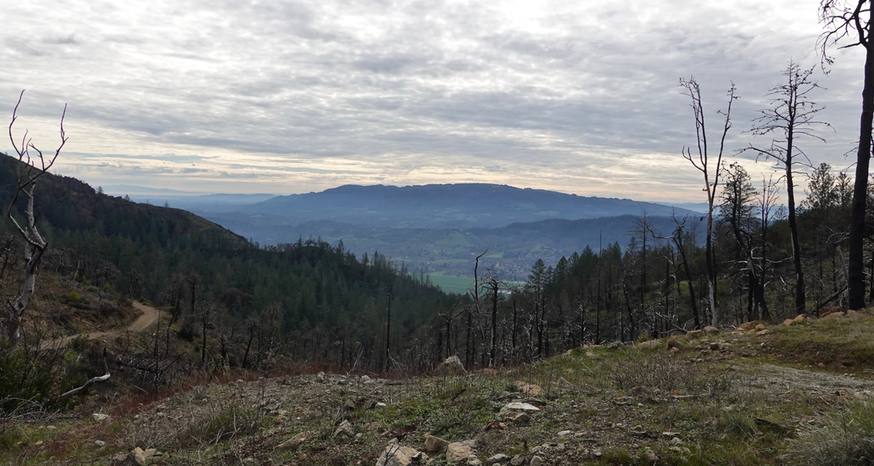 Looking down on the Sonoma Valley from Hood Mountain. (Image: Kathryn Reed)

Anyone who has lived where a wildfire has ravaged the land knows all too well that the landscape is forever changed after the flames have been extinguished.

Such is the case at Hood Mountain in the Sonoma Valley.

The trail map shows more terrain that in inaccessible than accessible. This is the result of the 2017 Nuns Fire and the 2020 Glass Fire.

The Nuns burned the southern side of the park, where we started our hike in mid-January. Crews were still doing work near the trailhead entrance.

The Glass Fire was more devastating to the park, burning a larger area and burning hotter. It affected the northern side of the park closer to the Los Alamos Road entrance. 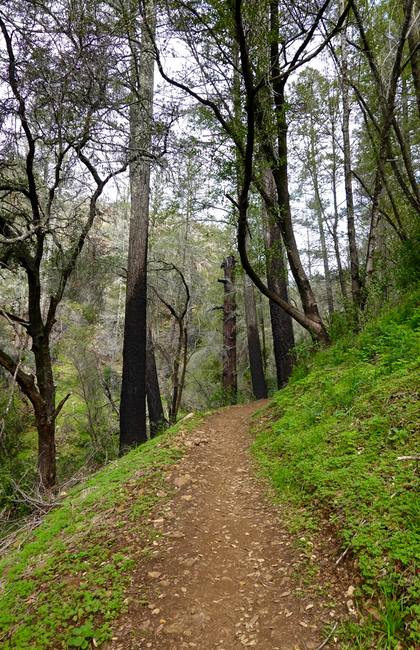 New growth among the scarred trees from the 2017 Nuns Fire at Hood Mountain. (Image: Kathryn Reed)

According to Sonoma County Regional Parks, “Overall, the (Glass) wildfire burned approximately 80 percent of the 2,000-acre park. About 50 percent was a moderate- to high-severity burn that killed or heavily damaged many trees. The fire burned the interior of the park, from the Santa Rosa Creek headwaters through the Sargent cypress forest, past the Hood Mountain summit and into Sugarloaf Ridge State Park.”

Having not hiked here before, the loss of vegetation did not affect me as much as it would a local who remembers what it was like pre-fire. But all of us who hike know all too well that our favorite places have suffered the wrath of a wildfire or is certainly susceptible to that occurring. All the more reason to appreciate what we have because one day it might not look the same.

Maybe I’ve been accustomed to the devastation of wildfire. I see a certain beauty in the aftermath. Mother Nature is so incredibly resilient. Grasses, shrubs and other flora sprout from a landscape that doesn’t look like there is fertile enough soil from which anything could grow.

The charred trees that stand like a naked forest are a powerful reminder of what fire can do. They, too, have a beauty all their own. Stare long enough and there is a sense of resilience, that they refused to fall. Those that eventually do will provide erosion barriers. Standing and fallen, both will provide habitat for various animals. 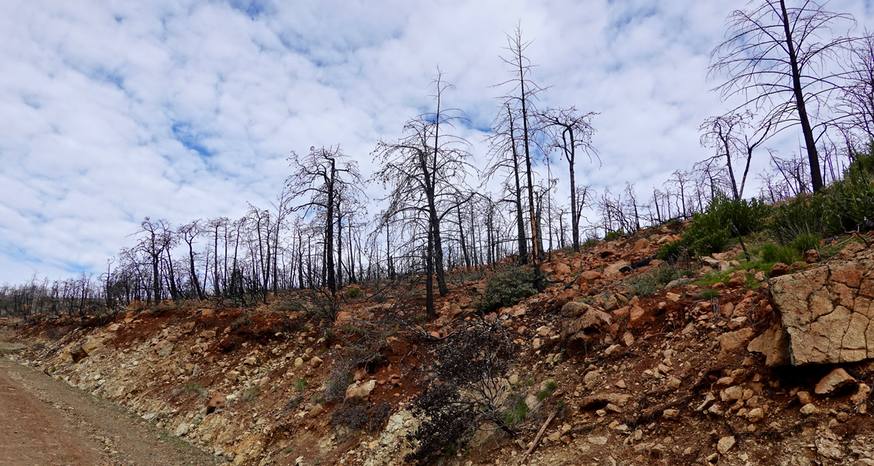 While it may seem like the forest is dead, look closer. Even a charred landscape is full of life.

Being immersed in the landscape it was easy to see where the fire burned hottest, how it jumped some stands of trees, and how crews eventually put out the flames, thus creating a line of sorts in the forest of burned v. untouched.

We started off by going up the road, which is so steep that a sign is posted for cyclists to dismount. I suppose that might have to do with the possibility of running into other trail users if speeds got so fast going downhill.

With so few trails open, for the most part we followed the signs for the Lower Johnson Ridge Trail and the Lawson Trail.

At the start the creek kept us company, with a few small waterfalls visible. Part of the trail is a dirt road, some of it is single track. With the fire, the contrast in terrain was striking from verdant green to midnight black.

A sign at the trailhead said, “On a clear day, you can see the San Francisco Golden Gate Bridge from Gunsight Rock and the Valley View Trail. Please note that most trails are for experienced hikers in good physical conditions.”

By the end of our loop we had clocked just more than 4 miles. The highest elevations point was 1,895 feet and the lowest was 889 feet. Looking forward to when the summit opens; it’s an elevation of 2,730 feet.

Hood Mountain provides recreation for people on two feet, two wheels and horseback. Dogs on leash are also allowed. However, note that some of the county park trails link to Sugarloaf State Park and the state says no dogs allowed.

There is more than one entrance to this county park; we started at the Pythian Road trailhead. It costs $7 to park at this Sonoma County Regional Park.