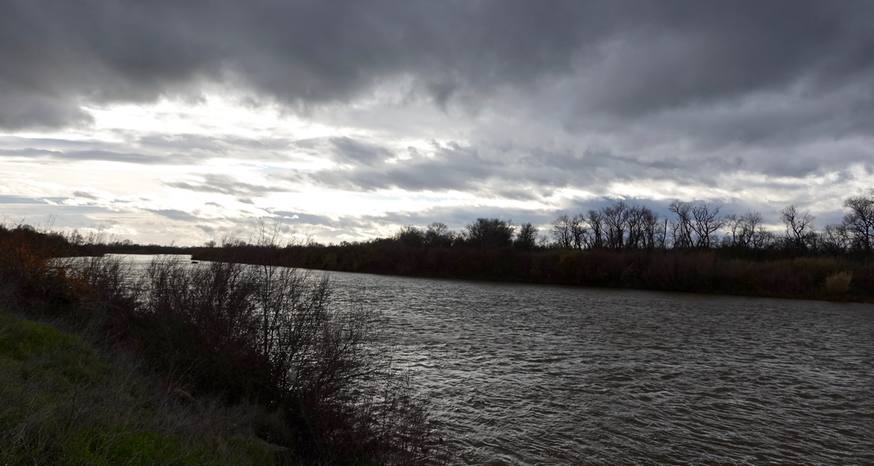 The sun is unable to completely penetrate the storm clouds over the Sacramento River. (Image: Kathryn Reed)

The sun tried to punch through, only to be thwarted by the ominous black clouds. The river looked so uninviting, rushing furiously downstream, its edges swelling to accommodate the recent rains.

Mother Nature’s vast moodiness was on display the last Sunday of December in the Rio Vista Unit of the Sacramento River National Wildlife Refuge.

Bundled up in warm weather gear and rain jackets, the mood of the 13 hikers was giddy. It was time to stretch our legs after several days of rain. Fortunately, the rain clouds were only threatening for this 6-mile excursion and never opened up to soak us.

I didn’t realize how much of a headwind there was until heading back to the vehicles with a tailwind that seemed to make breathing, talking and walking so much easier.

Much of the route was along the Sacramento River on a trail wide enough to walk at least two abreast. It actually looked like an old road. On this dreary day the grass growing along the trail, and in the middle of what would be tire ruts on either side was the only vibrant color.

This is just one of 30 units in the refuge. In all it stretches 80 miles from Red Bluff to Colusa. Twenty-four of the units are at least partially open to the public without a fee. Some are accessible only via boat or other water transport. 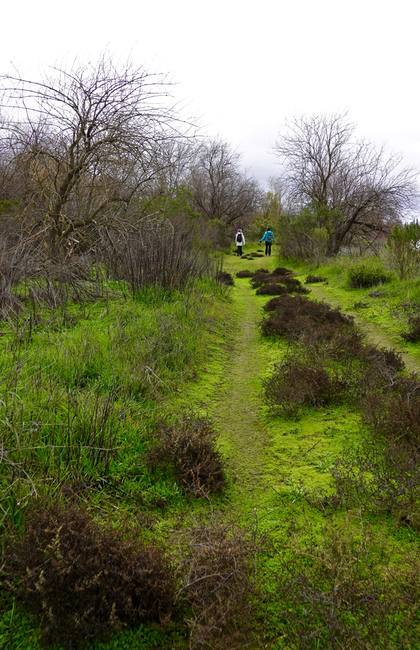 “The refuge consists of 10,819 acres primarily of wetlands, with some grasslands and riparian habitats,” according to the U.S. Fish and Wildlife Service.

The Sacramento River Refuge was established in 1937 “to provide refuge and breeding habitat for migratory birds and other wildlife, provide habitat and manage for endangered, threatened, or sensitive species, and alleviate crop depredation.”

The USFWS website also says, “The refuge supports over 250 species of birds. Most notable are the huge wintering concentrations (November-January) of 500,000 to 750,000 ducks and 200,000 geese. Raptor numbers swell as the waterfowl numbers increase, including bald eagles and peregrine falcons. Waterfowl viewing is good between October and March. In addition, shorebird numbers peak in the spring and fall, while some waterfowl and numerous migratory songbird species nest here during the summer. Many birds and mammals provide year-round viewing.”

In additions to fish and birds, those who recreate in this area could encounter ticks, mosquitoes, wasps, yellow jackets, bees, poison oak, stinging nettle, poison hemlock, rattle snakes, feral pigs, and mountain lions. We didn’t encounter any of the above. In fact, the weather even kept the birds from flitting about much.

To get there from Chico, we took Highway 99 north nearly 20 miles before turning left on South Avenue (just past the CalFire station on the right), and another left into the parking area. If you see the river, you went too far.