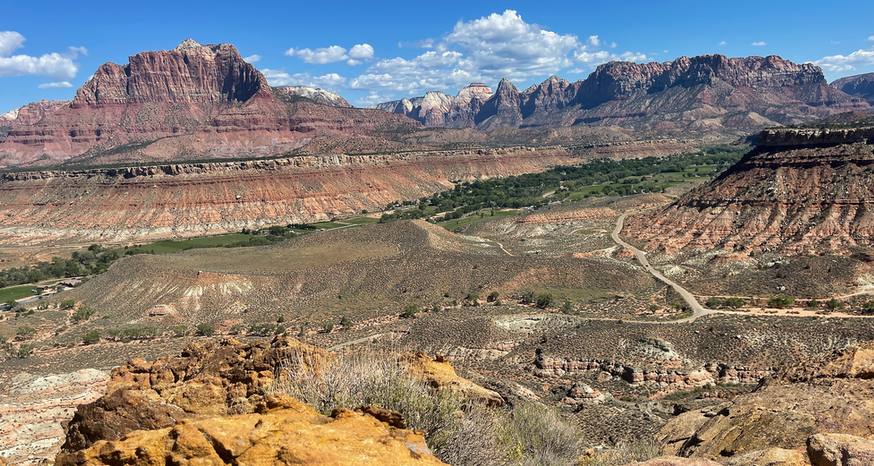 I almost didn’t go. What a mistake that would have been.

Being nervous was understandable. I had never ridden an ebike before. I was going with people who are much more into cycling than I am. I would be in unfamiliar terrain. (As were they part of the time.) I wasn’t confident in my fitness level compared to theirs.

Sometimes, though, you just have to say YES! 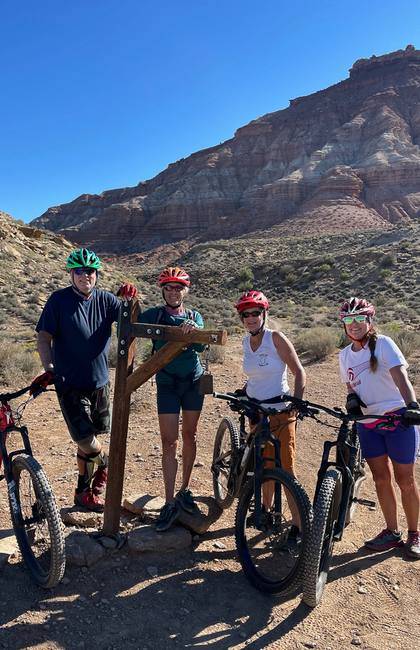 Craig, Becky, Kae and Donna at the cow bell.

Five of us spent the better part of a day last week on three distinct mountain bike rides in the St. George, Utah, area. Wow, wow, wow! I realize “wow” is not a great descriptor, but it’s a short, terrific word to sum up the experience as a whole and for each individual ride. In all, we rode almost 30 miles.

The day started with a ride up More Cowbell, where literally there is a cow bell to ring at the top. (This is closest to Hurricane, Utah.) This route was 5.1 miles, with an elevation gain of 387 feet. We reached 4,298 feet.

The worst part of this trail was the narrow, steep section where I walked. My fear of heights kicked in. Once on the mesa it was fairly easy riding. 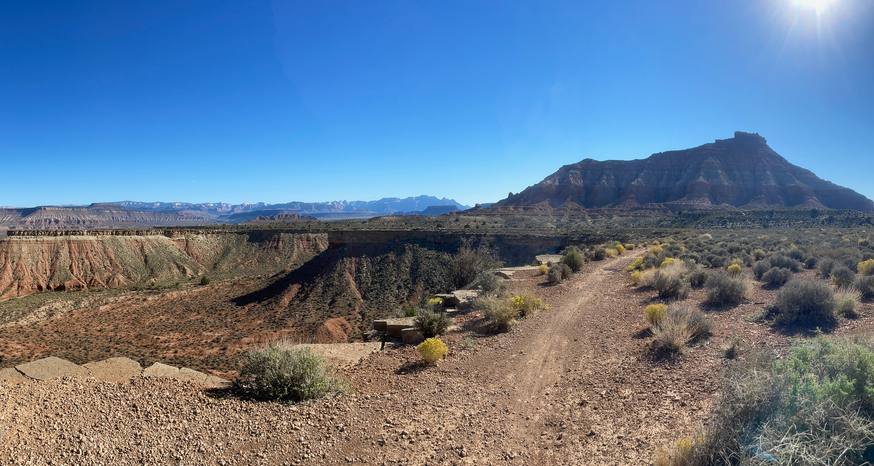 The top of the mesa along More Cowbell. (Image: Kathryn Reed)

Going up and down More Cowbell I had to keep telling myself to trust the ebike, that it could go over things my vintage hardtail and legs would not allow me to ride. It worked. Up, over, and down rocks I went without too much trouble.

Even so, my white knuckles and facial expressions were the give aways that I was definitely outside my comfort zone. The more I pedaled, the better it got; and my confidence increased. Encouragement from Donna, Becky and Craig helped ensure I would have an unforgettable experience—in a good way.

Next up was Wire Mesa. This was a 7.5-mile excursion, with an elevation gain of 456 feet. (Springdale and Rockville are the nearest towns.) The views of Zion National Park are stunning; those red rocks are breathtaking. Some jagged, some flat top. The white ones almost looked like they are snowcapped. At times it was hard to want to keep moving my legs because I just wanted to take in the scenery. 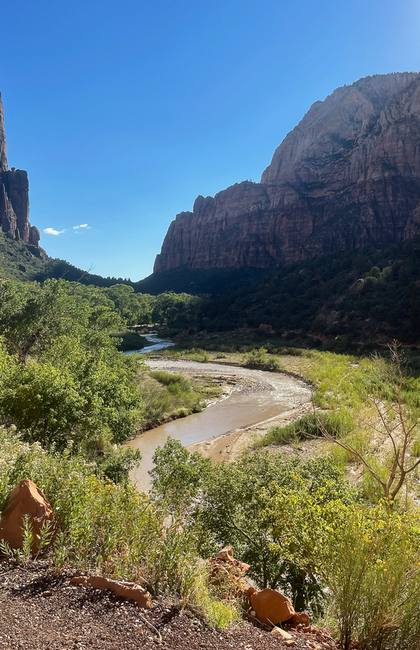 The reality is I was too busy concentrating on riding to totally appreciate the rocky wonderland that unfolded around me.

The Bureau of Land Management describes Wire Mesa like this: “The trail is a mix of dirt and slick rock that winds through and around a maze of sandstone hills and through juniper and pinion pine forests.”

I would opt to ride Wire Mesa over More Cowbell next time even though Wire Mesa is listed as being a bit more difficult ride. To me the scenery was better and nothing triggered my fear of heights.

Next up was Zion National Park. We started at the nature center and went up to Temple of Sinawava. This was a 15.5 mile ride on pavement—mostly the park road that is open to limited vehicle traffic. 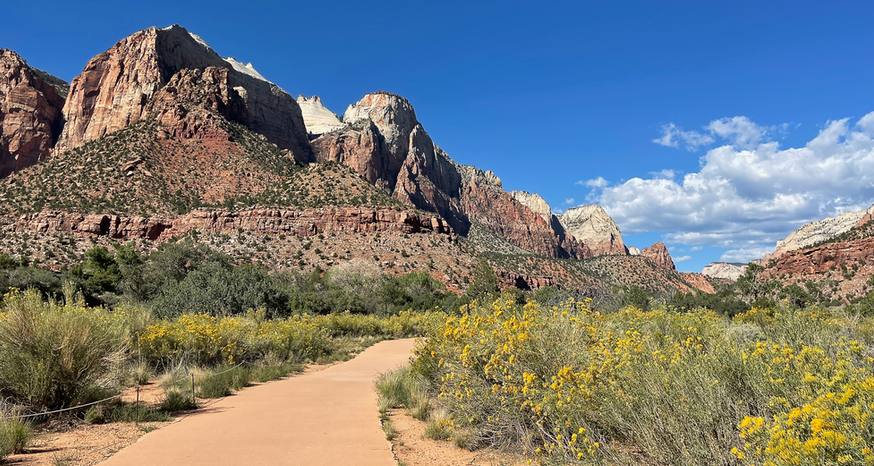 The start of the bike ride through Zion National Park. (Image: Kathryn Reed)

Surrounded by magnificent rock formations, again, it was hard to keep going when I just wanted to feel embraced by this ancient land mass.

The National Park Service says, “Most of the rocks in Zion National Park are sedimentary rocks made of bits and pieces of older rocks that have been weathered, eroded, and deposited in layers. These rock layers hold stories of ancient environments and inhabitants very different from those found in Zion today. In this distant past, Zion and the Colorado Plateau were near sea level, and were even in a different place on the globe—close to the equator. The rock layers found in Zion today were deposited between approximately 110 million and 270 million years ago. Only in recent geologic time have they been uplifted and eroded to form the scenery of Zion National Park.”

What a day. I’m ready to explore more of southern Utah.