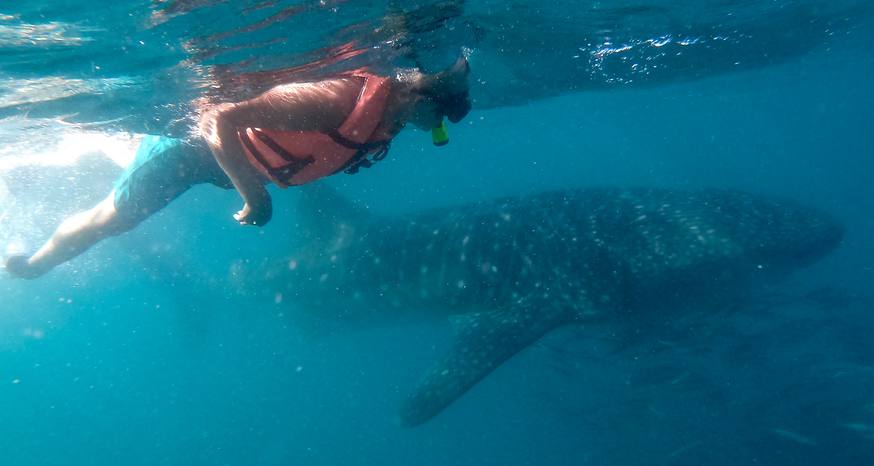 “They won’t swallow you.”

But will they nibble on me? Could one dismember me?

Whale sharks, while they are the largest fish in the world, are also docile. They are sharks, though their size is more whale like. They are often more than 30 feet long and weigh 20 tons.

In pairs we swam with these beasts with the guidance of Katrin. Polk-a-dots never looked so beautiful. A mass of gray is splashed with white circles. Their eyes tiny, like golf balls, are on the side of their heads instead of the front. They rely more on smell than sight to know if danger lurks. 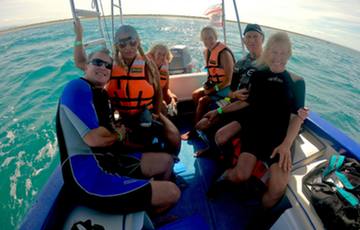 Kicking as fast I could, eventually I couldn’t keep up even though they only go about 3 mph. I wanted to reach out, but knew better. Swimming alongside them in their natural environment was a privilege and I wasn’t about to abuse it.

No need for wet suits this time of year, the water is bath like. Whale sharks prefer warm water, which is why they are found in the tropics like La Paz.

As solitary animals, they don’t swim in pods. They wait until they are 30 to have babies. Then can live another 70 years. 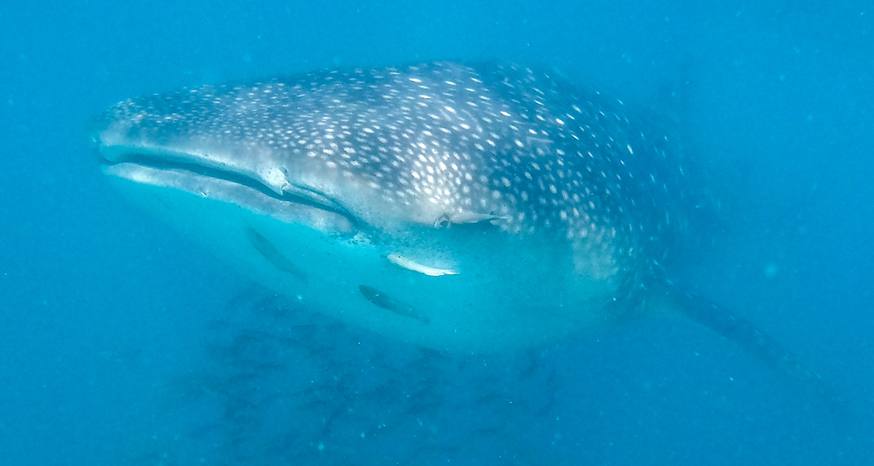 With their 4-foot-wide mouths constantly open as they saunter through the 75 to 80 degree waters of the Sea of Cortez, these creatures use a built-in filtration system for eating. All those thousands of tiny teeth are useless. For the most part they swallow plankton and a few other things whole. Gills expunge all the water that is swallowed.

“Their throat can only swallow something the size of a tennis ball,” guide Katrin says.

Unfortunately, these fish along with manta rays are consuming a large amount of plastic, at least elsewhere in the world, according to a study published this month.

Being so large, other fish will latch on to the whale shark for a free ride or swim nearby, almost like drafting, all as a way to be protected from predators. 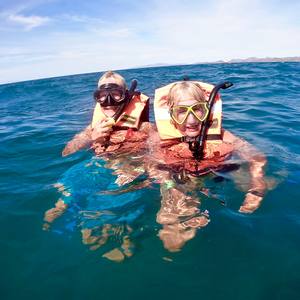 With their primary food source plankton lacking this fall in the La Paz area of Baja California Sur, the whale shark tour boats had to delay the normal Oct. 1 opening for a couple weeks. Whale sharks are protected here and in other parts of the world. The Mexican government limits the number of tour boats, when they can operate (season ends in February), regulates the number of people in the water, how close boats can be to the animals, and mandates people don’t touch the whale sharks.

Katrin with La Paz Vip Tours was our guide on the first Monday in November. To date it was the best tour I’ve been on in Baja – great response time, service fantastic, the knowledge and English fluency of Katrin exceptional, her patience with diverse personalities and athletic abilities outstanding, the equipment top grade. Eddie, the captain, was adept at finding these beasts (sonar is not allowed). A dorsal fin or tail out of the water were his clues. For $100, each of the six of us was in the water four times, wetsuits-snorkel-fins-mask provided, snacks-water on board, with tour time of three hours.