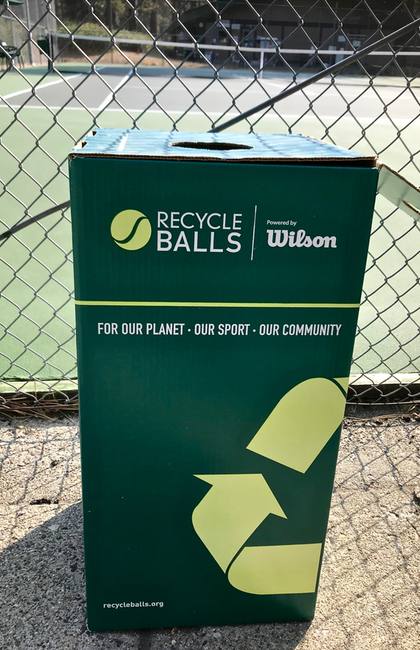 One and done. That’s the attitude for a lot of tennis players when it comes to a can of tennis balls. So many people won’t use a can for more than one session.

Then what? Usually it’s the garbage can for those three balls and the can.

Not so fast says Derrick Senior, founder of RecycleBalls. The Vermont-based nonprofit has been recycling tennis balls since 2014. Once the felt is separated from the rubber the product can actually return to the sport by becoming part of the court surface. They were used for the Laykold surface for the U.S. Open in New York.

They have also been used in equestrian arenas. RecycleBalls is working with Queen City Dry Goods to turn them into a shoe. Other research is under way to determine how else to use these discarded balls, with playgrounds a future possibility.

Zephyr Cove Tennis Club in Nevada has been working with RecycleBalls since 2017. Players can dump their spent balls into a box, which is then shipped to the company. In summer 2020 the club received the Green Ball Award from the company for having recycled 3,000 balls. The club believes the number is closer to 4,000 now.

Wilson, one of several manufactures of tennis balls, has partnered with RecycleBalls. That funding has allowed the company to not charge the clubs and others to mail the tennis balls to the East Coast.

It’s estimated that in the U.S. alone 125 million tennis balls are discarded each year. Since 2017, RecycleBalls has collected 4.2 million balls, has 1,900 partners participating in just about every state, with 15,000 bins scattered about the country.