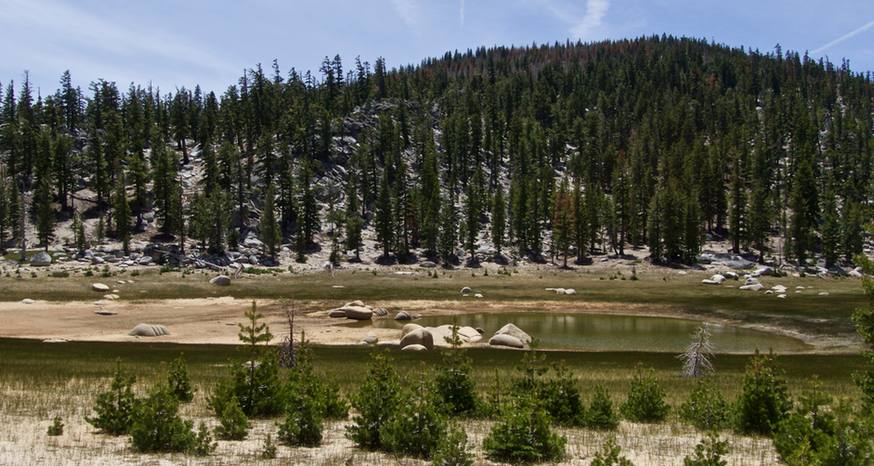 Not much water in Twin Lakes along the Tahoe Rim Trail on the East Shore. (Image: Kathryn Reed)

The trek to Twin Lakes in the Spooner Backcountry is one where the journey is more beautiful than the destination. It’s is a rarity when an alpine lake doesn’t capture all the oohs and ahhs.

Twin Lakes is just off the Tahoe Rim Trail near a junction that is popular with hikers and mountain bikers. With how low the water level was in mid-June, it would be possible to not even notice the lake. The expanse of dirt and grass had the dry lake bed being a larger mass than where the water was. From our vantage point we only saw one of the lakes. 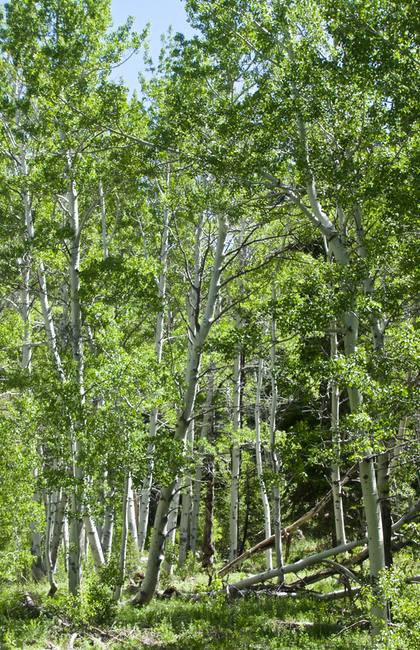 An aspen grove along the trail would be even more colorful in the fall. (Image: Kathryn Reed)

Jay Howard, who was the park supervisor for Lake Tahoe Nevada State Park for many years, said, “I think the issue of wet some years and dry for other years is due to a relatively small watershed. They are also small bodies of water that are greatly subject to evaporation. When evaporation exceeds the amount of water coming in from snowmelt, a pretty fast drawdown can occur. I don’t know for sure but I don’t believe those lakes have any groundwater or springs entering from below. Over the years that I’ve noticed, the fact that they have water has seemed to be tied to snowpack—heavy or at least average snowpack years, they have water—dry or below average snowpack years, they tend to have so little water that they dry very quickly. And yes, they are unusual due to their high location.”

These lakes, such as they are, are at almost 8,000 feet. One guy the four of us passed said in 30 years of hiking the area he had never seen water in the lakes.

A field of granite boulders seemed to be sprouting from either side of the lake. They were round, not jagged and rough like so many in the Sierra. This must be from being under water at times. 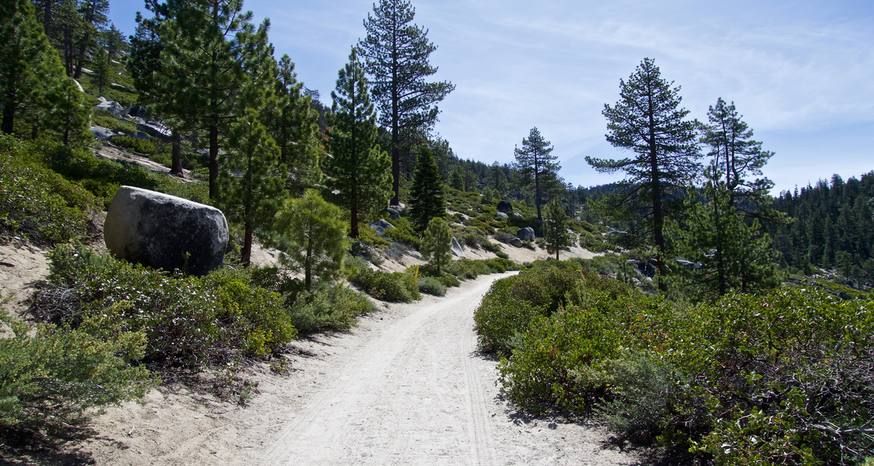 Most of the trail to Twin Lakes is an old logging road. (Image: Kathryn Reed)

The sign near the start of the trailhead in Incline Village says Twin Lakes is 3.8 miles. Three of us recorded a round trip of 9 miles from the base of the road. The parks department might want to redo its signs with the correct mileage. Better signage where the road meets the Tahoe Rim Trail would be appreciated as well. Twin Lakes is not on any of the signs up there. Had we gone left we would have been headed toward the Mount Rose/Tahoe Meadows trailhead of the TRT, while going straight would have had us going downhill on the Red House Flume Trail toward Hobart Reservoir. We took a right toward Spooner Summit, which was less than a mile to the lakes.

Most of our route was along Tunnel Creek Road, which to cyclists is better known as the Flume Trail. While we were going up, most on two wheels were coming down. This is an old dirt road, so it’s wide enough for various recreation users, and good for social distancing. Still, it was up the entire way and at times seemed a bit steep, especially for the two who had been living at sea level until a week before the hike. That steepness, though, didn’t present a problem coming down.

A couple spots along the route Tunnel Creek could be heard and seen. This would be a welcome relief for four-legged hikers, especially with much of the trail being exposed and not shaded. The openness was perfect for picture taking—water and mountains. Lake Tahoe in several locations was breathtaking with its grandeur. The curvy shoreline offered a definition not often seen from Tahoe trails; with some shallow areas mesmerizing because of the emerald hue.

Much history is stored in this section of the Sierra. A set of flumes were designed to take water from the area, through the Washoe Valley on the other side of the mountain, to Virginia City where it was used in the silver mines in the late 1800s. A tunnel on the Tahoe side was used to transport water and lumber in a V flume. That wood was needed to build the mine shafts. A couple informational signs are posted near the start of the trail. One says, “The Marlette Lake water system was nominated for the National Register of Historic Places in 1979 and was listed as a Historical District in 1992. The system has been upgraded and is still used today to supply Virginia [City] and Carson City with water.” Today the water system is owned by the state of Nevada. 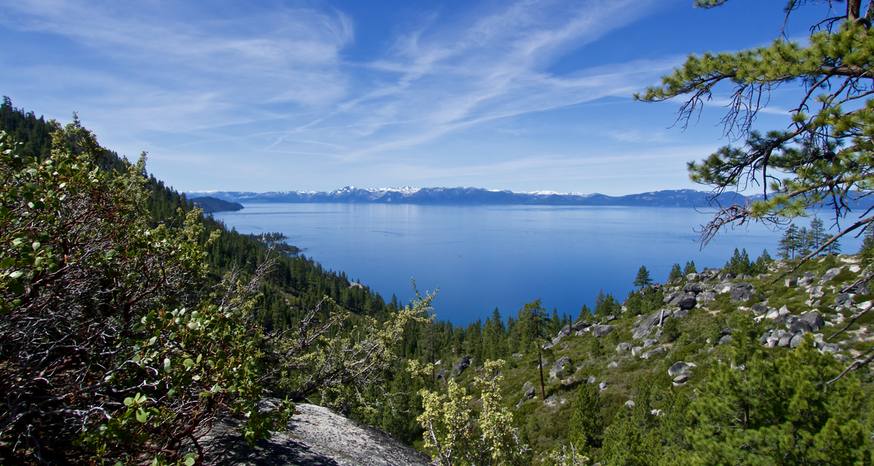 Lake Tahoe is prominent along much of the lower section of the trail. (Image: Kathryn Reed)