Mexican crews in Calif. for first time to fight fires 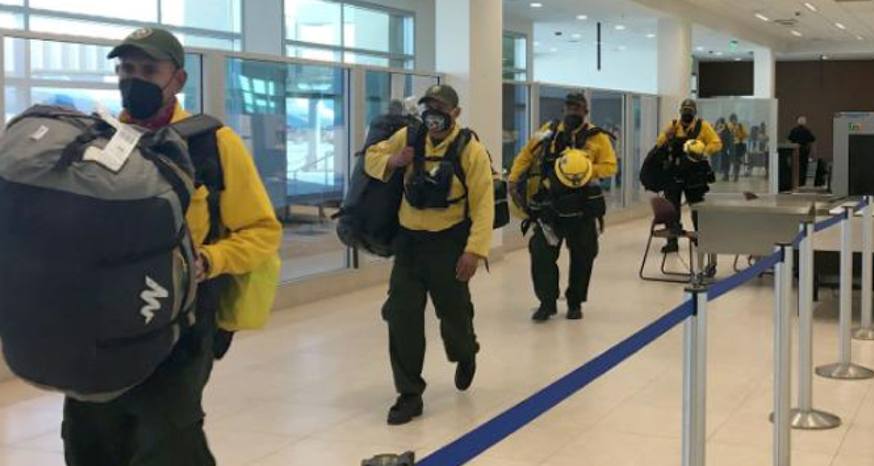 In this record-setting fire season, California firefighters are getting help from south of the border.

On Sept. 23, 101 firefighters (four of whom are women) from 22 states in Mexico arrived in Central California to work the Sequoia Complex fire. Lightning started the blaze on Aug. 24. It is burning on the Sequoia and Inyo national forests, as well as state and private land. It is being managed by the U.S. Forest Service, CalFire, and National Park Service.

With fires burning in multiple states, personnel and equipment are stretched thin. This is why firefighters have been brought in from other countries. At different times crews from Canada, Australia and New Zealand have also been on the front lines this season.

States where the Mexican firefighters are from. (Graphic: USFS)

The U.S. Forest Service and Mexico have been working together on fire management since 1962. Starting in 1983 the Forest Service began providing training and assistance to Mexico to strengthen that country’s fire management in terms of fire planning, capacity building and research, and how all of that applies to fire issues.

In 1989, the Forest Service sent fire management specialists to assist Mexico in the disastrous fire season that occurred in the state of Quintana Roo. This year is the first time Mexican firefighters have been assigned to a fire in the United States.

“The success of fighting fire in California is our interagency cooperation. We look forward to building our partnership with CONAFOR (National Forestry Commission of Mexico) during this assignment for further collaboration. Fire isn’t just a California problem, it’s a world problem,” said Bob Baird, director of fire and aviation for the USFS.

Eduardo Cruz, director of CONAFOR, spent two seasons as a helitack firefighter on the Sequoia National Forest early in his career as part of the training and exchange program.

“I am very excited for this unique opportunity to visit a station I worked and trained at as a young man and to bring with me firefighters from Mexico to aid in the California firefighting effort,” Cruz said. “Fires do not have borders, fires do not have different languages and cultures. In the end we all speak the same language when it comes to fighting fire.”

The Mexican firefighters underwent an orientation and refresher training before reporting to the Sequoia Complex on Sept. 25. The five hand crews will be tasked with establishing and improving perimeter control lines.

This year the Forest Service and CalFire have responded to 7,982 fires in California that have burned more than 3.6 million acres. This makes it the largest wildfire season in history for the state. More than 7,500 structures have been reduced to ash and 25 people have lost their lives.