Cold water should only be for drinking. Certainly not standing or walking in.

At least that’s what I thought before traipsing through a spectacular slot canyon to Kanarra Falls in southern Utah earlier this month.

Walls in various shades of red loomed above us as we hiked into the canyon. While threatening clouds were in front of us, no storms were in the forecast. A canyon is not where you want to be during a flash flood. 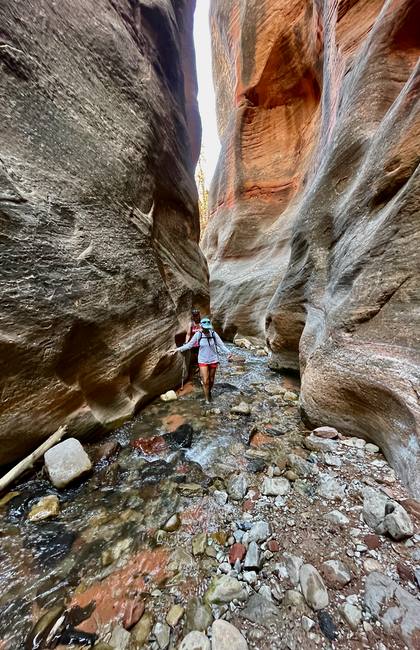 Becky and Donna pick a course on the water trail through the canyon. (Image: Kathryn Reed)

This isn’t an adventure for everyone. For starters, the water was 47 degrees and we were walking in it for a good part of the way because at times no dirt trail existed. Only once did the water get above my knee. Even so, my feet were appreciative when there was a dirt trail so they could warm up a bit.

Other obstacles include a 20-foot aluminum ladder at the first waterfall. Of course it would be easy enough to turn around here. Plenty of beauty to oh and ah over before arriving at this point.

However, the five of us never thought about not going forward. We wanted to go until it made sense not to. 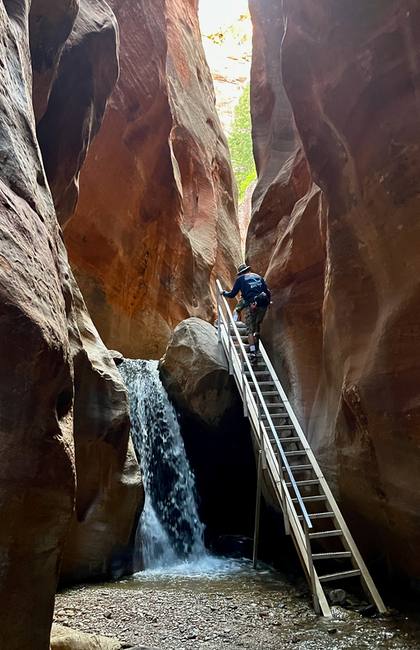 We weren’t canyoneering—so no need for ropes, helmets or other equipment that can be used in that sport. We were merely hikers—some wearing water shoes, some in water proof boots, no one in neoprene booties, though those were in one person’s pack just in case.

Water in Kanarra Creek runs year-round, flowing from Kanarra Mountain to the canyon and eventually to the ag fields surrounding the town.

These narrow canyons are prolific throughout the southwest. 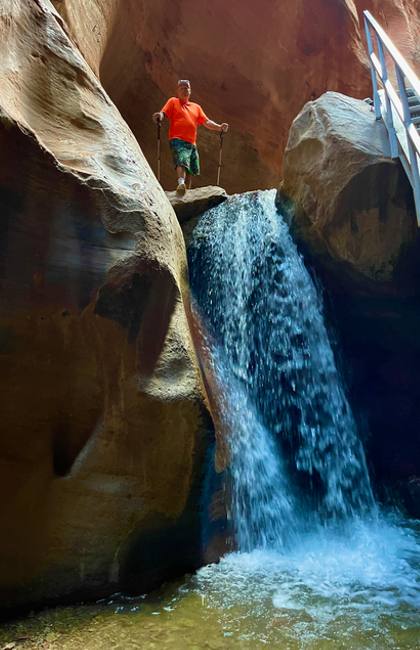 Craig at the top of the falls. (Image: Kathryn Reed)

According to Visit Utah, the state’s tourism agency, “Slot canyons are narrow gorges in soft rocks like Utah’s layered sedimentary deposits. They are named for their narrow width, often squeezing down to a sliver. It is said that Utah has the largest concentration of slot canyons in the world.”

Friends seemed to disappear as the creek curved and the walls seemed to close in upon them. 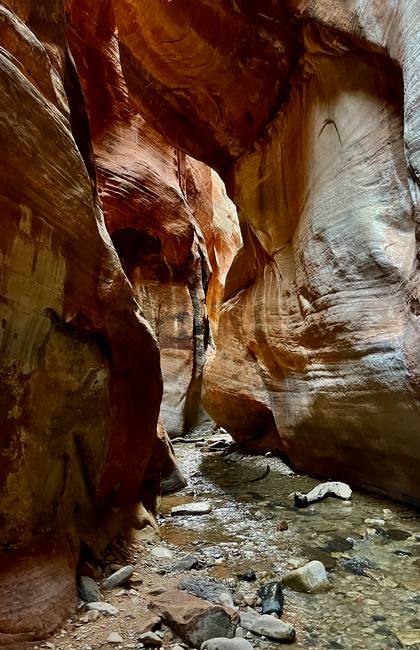 At times it was hard to know where to look because the scenery was so stunning. The water, the rocks in the water, the walls directly in front me and then hundreds of feet above me, as well as what little foliage there was that was signaling fall’s arrival. It was like being immersed in a three-dimensional painting, with the colors changing as the sun filtered in and out.

Another waterfall would have required scampering up a boulder if previous hikers had not stacked some logs in the corner to make climbing possible. I’m not sure how I would have gotten up or down this section without that assistance. Our path finally stopped when another fall, which really looked like two as a boulder split its flow, was impassable.

The website for the falls says, “This is the final falls on the hike. Do not go beyond this point!  Some hikers may put up ropes or logs to try and continue on, but these are not part of the hike and are dangerous. It is very difficult for search and rescue to go beyond this point, so it is not recommended.”

No need for more. My senses were already thoroughly stimulated by the natural beauty. 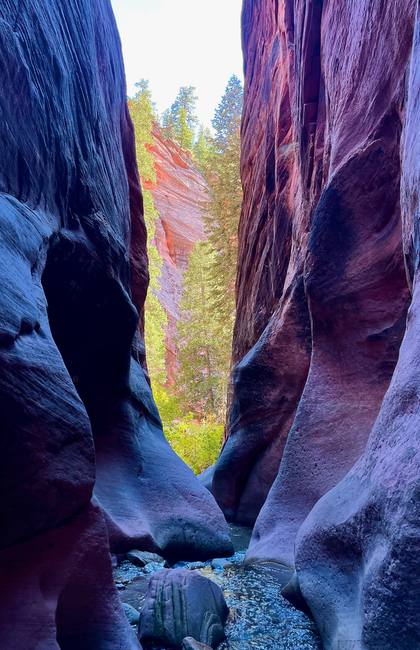 This is one of several slot canyons in Utah. (Image: Kathryn Reed)