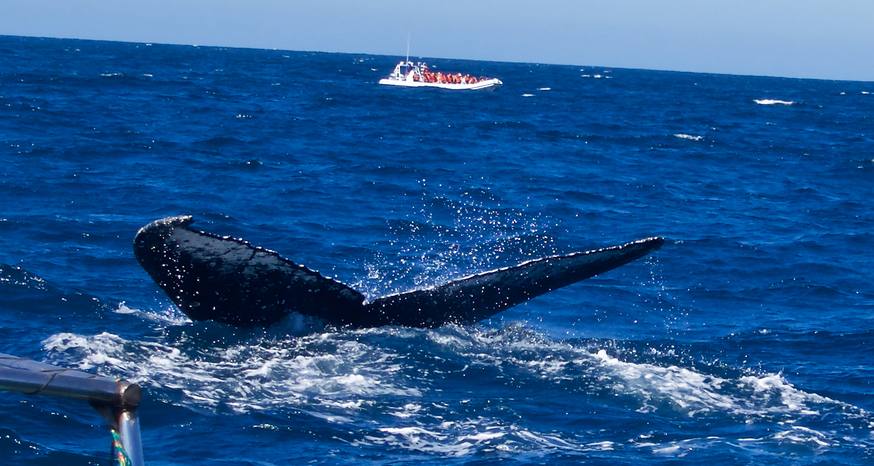 Eyes darting back and forth, Chebo seems to have a sixth sense when it comes to finding whales. No sonar (it’s illegal), no radar. He relies on his eyes and the other boat captains to find these mammoth mammals.

A spout is the best sign. With all whales needing to surface to breath, they can’t disguise their exhale. Depending on one’s proximity it looks like a spray of water or a puff of steam.

We head straight out from the marina at Cabo San Lucas, skirt the famous arch and join the other boats congregated in the Pacific Ocean. A mom and her baby are there swimming. It doesn’t take her long to take the calf underwater for a while. 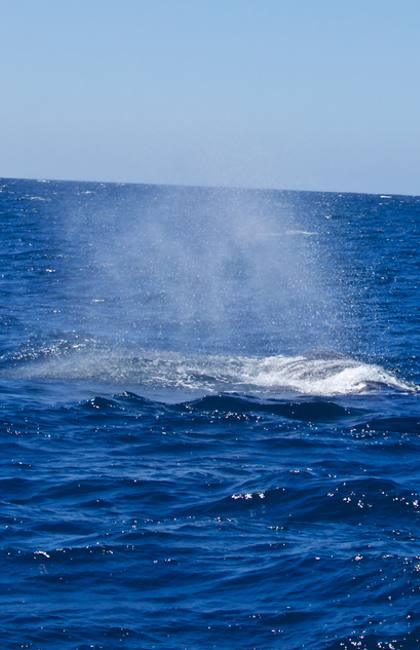 A whale’s blow can be seen miles away. (Image: Kathryn Reed)

Full throttle ahead. The long, slick back of the whale looks like a black rubber slide. Mom and baby swim along, not seeming to care about the nearby boats. One can only imagine what it’s like for them to be chased by boats multiple times a day.

It’s easy for them to disappear, which could be 300 feet below us. It might be a while before they surface; they can hold more than 1,300 gallons of oxygen.

It’s peak season for whale watching in Baja California Sur. Mostly it’s humpback whales – moms and babies – that are plying the waters of the Pacific Ocean. The whales – some reports say 10,000 humpbacks migrate a year – head to this part of the world to give birth in the warmer water compared to the west coast of the United States, Canada and Alaska. Humpbacks travel as far south as Colombia, making for the longest migration of all whales.

Babies aren’t born with enough fat to handle the frigid waters of points north. To put on weight they drink more than 50 gallons of milk a day. 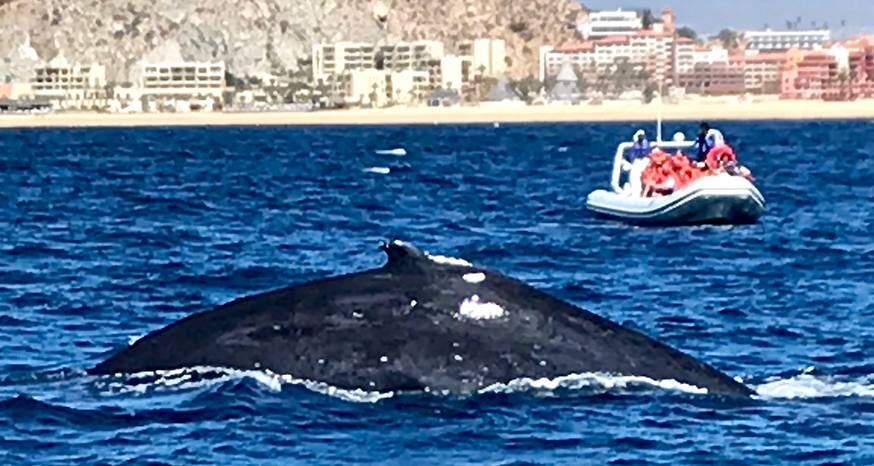 Gray whales are the other most common visitors to this area. Their numbers have returned after hunters nearly put them on the extinct list.

Other whales plying the waters of Baja, be it the Pacific or Sea of Cortez, include sperm, minke, fin, pilot, finback, orca and blue. Blue whales are the largest animal on the planet.

“Gray whales are more white and don’t breach,” Laura says. She and Chebo run the Rissalena, which they inherited from their dad. They have a crew of two, with Cesar and Chuy mixing drinks, squeeging seawater off the deck, manning the bathroom, and doing whatever is needed to make the 18 guests aboard the catamaran more comfortable.

People from New York, Illinois, Texas and other locales are aboard. One guy who has had a place in Cabo for more than 30 years goes out with the Rissalena multiple times of year. It’s the family-run operation, homemade lunch, and size of the boat that keeps him coming back.

Suddenly Chebo, the Rissalena’s captain, makes a 180-degree turn. Good call. We are the lead boat. These whales only go about 10 mph, but it seems like they are sprinting.

We were treated to the mama throwing her tail in the air. The magic of these creatures is mesmerizing. No wonder people do more than one trip a season.