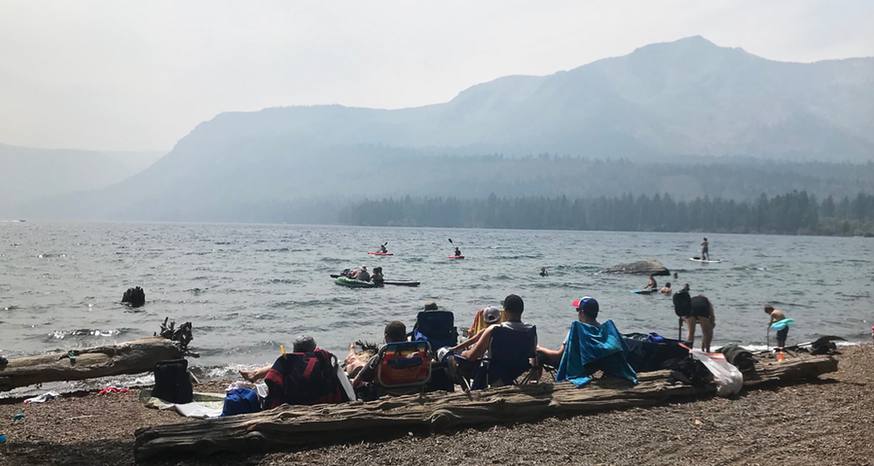 Smoke did not deter people from visiting Fallen Leaf Lake in the Tahoe basin in summer 2020. (Image: Kathryn Reed)

Smoke from wildfires may be as dangerous to the environment as it is to humans.

Every summer and fall when smoke inundates a town health officials issue warnings, often telling people to stay indoors. Wildlife doesn’t have that option. Bodies of water cannot be covered, nor can acres of flora or soil. The impacts of smoke on the environment, while not well known, continue to be calculated.

In November the UC Davis Tahoe Environmental Research Center received a nearly $200,000 grant from the National Science Foundation to study the effects of wildfire smoke on lakes in the West. This will be a group project with the University of Nevada and the National Park Service out of Crater Lake. Lake Tahoe, Crater Lake in Oregon, Clear Lake in Lake County, and about 20 smaller lakes in the Sierra will be studied.

“We have instruments in all of them measuring oxygen every day,” Geoff Schladow, executive director of TERC, said. “We can learn what affect smoke is having on the respiration and growth of algae.”

Algae needs nitrogen, phosphorus and light. Smoke allows less light in, which decreases the amount of nitrogen and phosphorous in water bodies. The consequences could be greater on smaller lakes, according to Schladow.

“If suddenly you have conditions that favor production of algae, then winter comes, ice forms on top of the lake and all the algae falls to the bottom the of lake, say 10 times as much because of smoke, and it starts to decompose in winter, they then consume oxygen,” Schladow said. “So oxygen may disappear in the lake. That could kill the fish living there, invertebrates and zooplankton. It could affect the ecosystem.”

The grant will allow scientists to make sense of all the data that has been collected. Findings could take 12 to 18 months.

Schladow said the hypotheses to be looked at include:

During the June 2007 Angora Fire on the South Shore scientists studied the effects of smoke and ash on Lake Tahoe in real time. Nutrient levels increased at the end of the lake where the fire burned, with conditions returning to normal within a week or two. Angora Creek had ongoing monitoring, with elevated levels of nitrogen and phosphorus found for several years. Because it is a small tributary to Lake Tahoe, the impacts on the larger body of water were negligible.

Studies were also conducted by TERC regarding the smoke from the 2013 Rim Fire near Yosemite. Lake Tahoe, Emerald Bay, and Cascade Lake were studied, along with Cherry Lake and Lake Eleanor—both located close to the epicenter of the fire. The 2014 King Fire that burned in the Eldorado National Forest west of Lake Tahoe was also studied.

Schladow said there was a shift in where things were in lakes because they physically responded to there being less ultraviolet light. He said it took a couple months for everything to return to pre-fire conditions.

The U.S. Forest Service has also been looking into the impacts of wildfire smoke on the environment.

“Wildfire smoke and ash can act as a fertilizer when it deposits on land and in water. Those nutrients can further degrade the clarity of Lake Tahoe,” according to Jonathan Long, U.S. Forest Service research ecologist at the Pacific Southwest Research Station. “Smoke can influence germination of various plants, including stimulating germination in many shrubs. I think the impacts of smoke/ash deposition into the lake are likely to be the biggest effect. I have been engaged in some modeling work with John Mejia at (Desert Research Institute) that relates to this issue, although I don’t know that anyone has quantified the effects from the past few months of smoke events yet. Effects on forests are also uncertain, since smoke effects germination, temperatures, nutrients, and some pests.”

A study published by the Ecological Society of America in 2018 looked into how smoke can transport microorganisms. Long said, “The authors speculated that smoke could influence spread of the pathogen that causes white pine blister rust, which already impacts the three species of white pines in the basin.”

Long added, “Smoke from burned areas draws in various kinds of insects, including some wood boring beetles. Those effects will be greatest in the burned areas themselves.”

The Nevada Department of Wildlife, while more concerned about the actual fire and its impact on animals, still has an eye on the negatives of smoke—as there are no perceived positives. Dense smoke changes the air temperature and decreases visibility.

“Some birds like swallows need to eat insects every day to maintain their body weight. With different temperatures there are not as many insects,” said Nate LaHue, NDOW veterinarian.

Birds have flown into buildings or other obstacles because their eyesight is impaired from smoke or because they became disoriented. Often this results in their death.

One advantage animals have over humans is that over centuries they have adapted to living with fire, which includes smoke. Many hunker down during smoky conditions. What isn’t known is how they are adapting as fire seasons, at least in the Western United States, become more intense and burn for longer periods of time.

When LaHue conducts one of his approximately 300 necropsies each year (this is an autopsy on an animal) smoke inhalation is not something he usually looks for. The diversity division at NDOW monitors wildlife populations. It’s possible if numbers change after a significant wildfire smoke event in the state, that it could trigger a closer look at smoke’s impact on animals.

NDOW is a small department, so it relies on studies conducted by other entities. Jasmine Kleiber, a wildlife specialist in NDOW’s habitat division, pointed to a research from the United Kingdom and a study from the University of Washington in Seattle stating that smoke lowers biodiversity levels. Sound measurements were used, noting a decrease in animal calls during smoke events.

“There is speculation also of some impacts to lung function,” Kleiber said. “There may be damage to tissue similar to humans. Any damage to tissues could leave animals prone to other viruses.”

Different species have different lung functions and capacities, so the amount of particulate matter that gets into the respiratory system will impact each animal differently. Just like people, sick, young and very old animals are more likely to succumb to smoke, Kleiber said.

“The reality is we don’t know a tremendous amount about the effects of smoke on wildlife except it’s similar to people,” Kleiber said. “It is a big concern, though. A tremendous amount of staff time and resources are spent on wildfire activities because they have such a profound effect on our wildlife throughout the state.”

While humans cannot prevent wildfire smoke or redirect it, Kleiber believes it is still important to know what smoke is doing to the environment.

“We should worry about it. It is worth better understanding how wildfires and the components of wildfires like smoke effect our wildlife, water quality, and soil. Natural resources are already under a tremendous amount of strain for numerous reasons,” Kleiber said.

Note: This article first appeared in the Winter 2020 issue of Tahoe In Depth.