Wildlife remain in neighborhood that was once wetlands 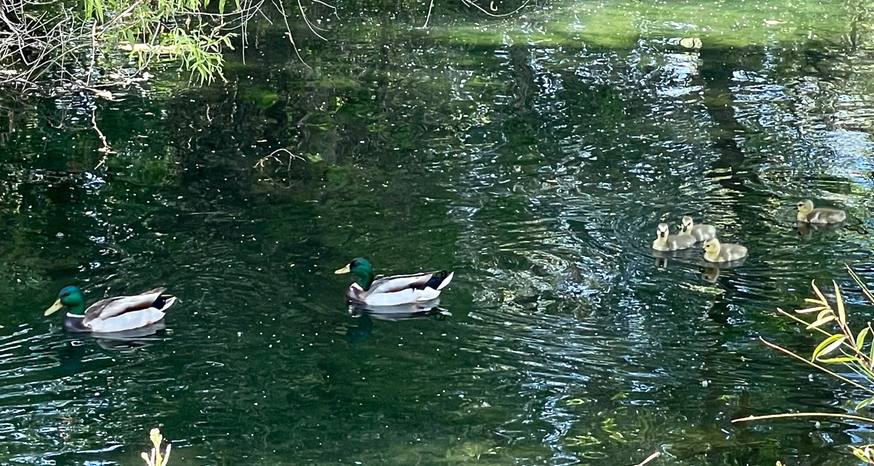 Ducklings and their parents swim in one of the California Park lakes. (Image: Kathryn Reed)

Not many suburban neighborhoods can boast being home to osprey, turtles and multiple species of fish.

California Park in Chico is one such neighborhood. It is comprised of more than 1,800 single-family residences, condos and apartments on the east side of town. The homes, along with two manmade private lakes, a chain of ponds, and miles of walking trails cover more than 60 acres.

Walking along the trails near the lakes it’s easy to forget I’m living in a city of nearly 95,000 people. It can feel like I’m in my own private nature preserve. I say private because only residents are supposed to be on the trails, though no one has ever asked me for my card—a good thing since I never have it on me. 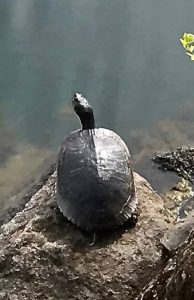 A turtle gets some sun on the edge of the California Park lake. (Image: Kathryn Reed)

In early spring the red-eared slider turtles were out in abundance. With the weather much warmer now, their sightings have dwindled. Signs say they mostly stay on the bottom of the lake, coming up for a breath now and then. This non-native species is here because someone let out their pet turtle. They are wiping out the native northwestern pond turtle.

Geese and wood ducks are what proliferate the area. They are on land and water, with babies being in tow in late spring.

While I have not seen an osprey or great blue heron on my walks, they call this area home.

Several people fish these lakes—either on land or boat (no motorized boats are allowed). Small bass, blue gill and other species are swimming around. It’s all catch and release here.

While my specific neighborhood within the larger Cal Park area is 2-years-old, the rest of the homes are much older. The dam and reservoirs were finished in December 1986. The project was started by Jack Graham in 1968. He envisioned 25,000 people would live in this planned community; a lofty goal considering Chico at the time had 19,000 residents. 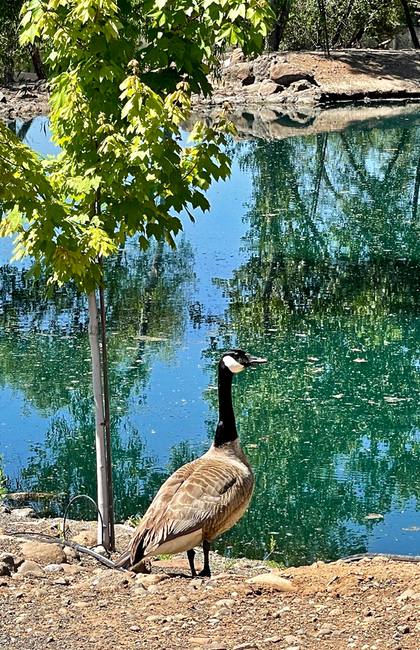 Most often geese are in a flock. (Image: Kathryn Reed)

This was once wetlands.

“When we look at the soils, maps and so forth of this area before houses were put in, there’s the indicators that those vernal pools complexes and riparian corridors existed in those areas,” Don Hankins, a professor at Chico State University, told North State Public Radio.

It’s not the first time I’ve lived someplace where people came before the environment. Think of all the areas of San Francisco that have artificial fill. And Tahoe, well, they paved over paradise to put up casinos, other commercial enterprises and a multitude of housing.

I will continue to appreciate the wildlife from the trails in my new neighborhood, hoping all the wildlife remains that way and that more sensitive areas don’t get destroyed going forward.