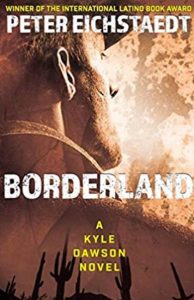 Drug lords, murder, a U.S. presidential campaign, love, family intrigue – “Borderland” (Wildblue Press, 2017) has it all and then some.

Author Peter Eichstaedt weaves a tale in this novel that while at times is formulaic, at other times offers unexpected plot twists. It is a fast read about life on the border. But it’s so much more than that. The main character is drawn back to the U.S.-Mexico border where he grew up after his father is killed. His newspaper editor in Washington, D.C., allows him the freedom to pursue this personal story.

While Eichstaedt has the credentials as a journalist to write such a story to make it believable, the book could have used better editing.

It was hard to read this after having read his book “Dangerous Divide,” which I so enjoyed. It was a true story looking at U.S.-Mexico border issues. Then again, I prefer nonfiction over fiction. For those who like murder mysteries, “Borderland” is sure to please.