At times I felt like I was on the raft, wanting to hold on, to jump to the high side to balance it. It had been a long time since I was so engrossed by a book.

Author Kevin Fedarko easily transported me to the Grand Canyon River. And while many years ago I took a multi-day rafting on this majestic river, this story wasn’t about an ordinary paddle. “The Emerald Mile: The Epic Story of the Fastest Ride in History Through the Heart of the Grand Canyon” (Scribner, 2013) at times had my adrenaline rushing in the confines of my home. 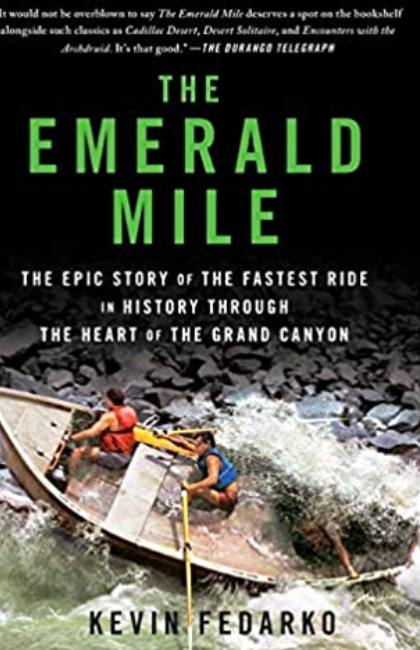 Fedarko does more than merely write about an event that occurred in 1983 after an epic winter runoff. That alone would have been interesting and worth of my time—especially since I knew nothing about the Grand Canyon speed record.

“The Emerald Mile” has a ton of depth to it. It’s about the history of the river, about how dams started plugging her up, and the people who were involved in all of this. This book is part adventure-outdoor thriller and part history-political retrospect.

The buildup is necessary to understand the significance of the Glen Canyon Dam nearly coming apart because of the torrent of water rushing from the melting snow in Colorado. Fedarko creates a reverence for the river itself.

Just when I thought Fedarko was going off on some irrelevant tangent he wove it all together in a suspenseful, interesting manner. His adeptness to paint a picture with words  brought the story to life in colorful detail.

This book came recommended to me from Cliff Taylor, who I met when I had an extended stay at his place in Mulegé in Baja California Sur last November. He told me he had a bit part in it, then laughed. His bit part is funny; well, the description of him is.

This book was the perfect escape from life’s stressors.