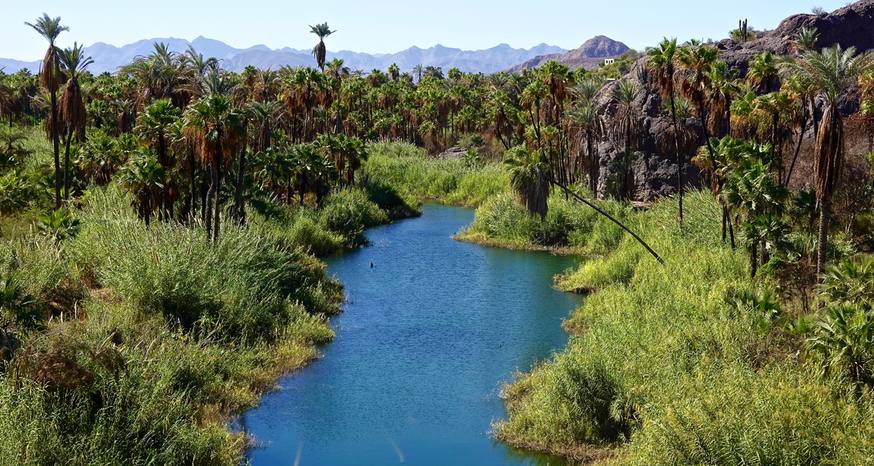 The Santa Rosalia River is a distinguishing landmark in Mulegé. (Image: Kathryn Reed)

An unexpected vacation along a tranquil river with palm fronds swaying in the breeze, the Sea of Cortez within walking distance in one direction and the town in the other, well, it could have been worse.

When the Jeep made a loud clunking sound I knew I wasn’t going anywhere. While it spent more than a week in the shop, I spent time getting to know Mulegé, a town of less than 4,000 people in Baja California Sur. 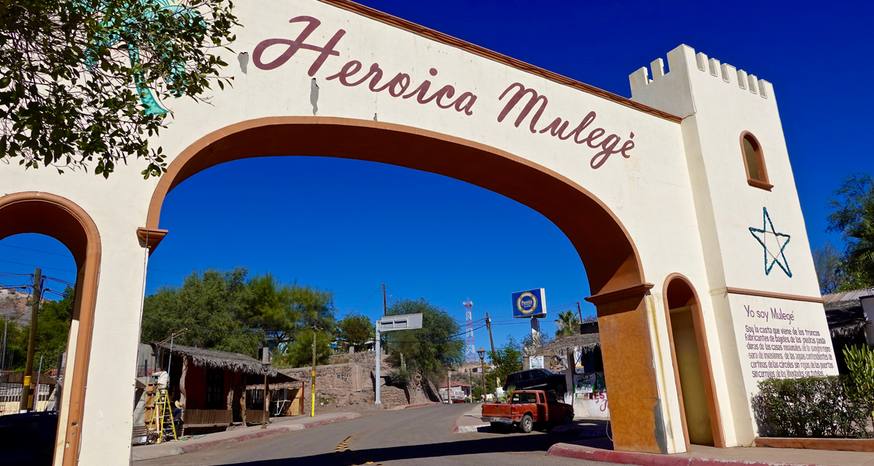 It’s a proud town. After all, the full name is Heroica Mulegé. The “Heroica” part came about after the Mexican-American War of 1846-1848. The locals were able to stave off an invasion from the United States. While Mexico lost the war, Mulegé won the battle and obviously remained part of that country. (This is the war where the U.S. acquired the land that today is California, Nevada, Utah, Arizona and New Mexico.)

Prior to my “forced” stay I had spent one night in Mulegé in March, and had filled up the gas tank more than once as I passed through. That one night as well as crossing over the river on the upper bridge made me curious about this town. Now I had the time to satisfy that curiosity. 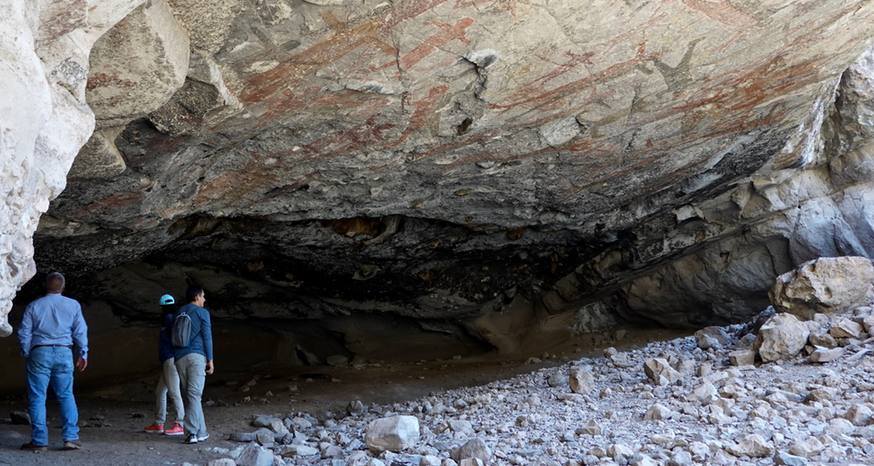 Trips to cave paintings are available with a tour guide out of Mulegé. (Image: Kathryn Reed)

Several cave paintings are in the area, with the Borjitas reportedly the oldest in North America.  The guided trip that lasted the better part of a day was outstanding. That alone made the stay worthwhile, as I had wanted to see some of these Baja caves that so many had told me about. If only the ceiling could talk, to share the stories from more than 7,500-years-ago. I wonder what life was like. How was the desert different? Did these people travel? What did they eat? What did they do for fun?

What I am left with after spending 11 days and 12 nights is this overwhelming sense of how wonderful the people of Mulegé are—no matter their nationality. This has been my experience 99 percent of the time in Baja, so it should have come as no surprise. What was different this time, though, was that I needed help. And help readily came without having to ask.

I was lucky to have been staying someplace where the owner spoke English, gave me advice on the Jeep and mechanics, loaned me his vehicle, kept reducing my nightly rate the longer my stay went on, invited me to dinner with his friends, and for drinks more than once. (I declined all of them because being maskless indoors with strangers isn’t my thing these days.) 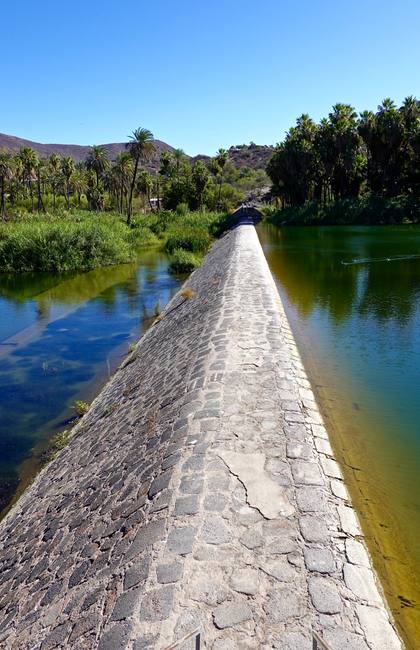 The Mission Dam is on the north side of town. (Image: Kathryn Reed)

Cliff Taylor, who owns Clementine’s (aka Cliff’s Place), is quite the character. The 78-year-old will say, “I have stories”—and he does. He tells them with a drawl that still lingers from growing up in south Louisiana. He was a professional poker player in Las Vegas for a while, became a certified public accountant, opened a bed and breakfast with an ex-wife in Oregon, sailed a bit, and then put down roots in Mulegé.

Taylor bought his house in Mulegé in 2002, the first day he was in town. It was cheap—$15,000. He later found out it was so inexpensive because it was built out of wood. Not a good thing in this climate; termites can destroy a place. He got it reinforced and has been living in it ever since.

Today, he has 13 rentals of various sizes all in an enclave along the Santa Rosalia River. (My first night I was in an oversized studio with a courtyard; the rest of the time a two bedroom, one bath house that slept seven.) He has built about 20 places, selling some to friends, doing it on spec for others. He’s in the process of building a three-story duplex right on the river. 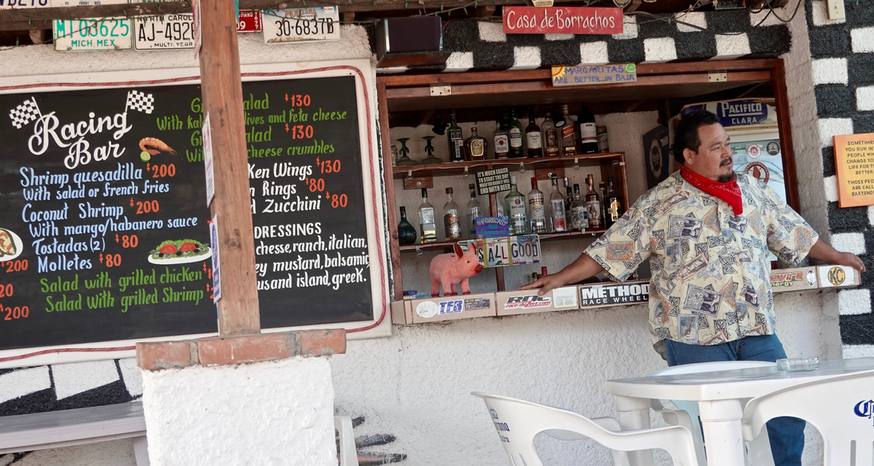 Juan Carlos says business is down at the Racing restaurant because fewer tourists are in town. (Image: Kathryn Reed)

It was along this river that AJ and I would walk multiple times a day. Mostly pelicans flock to this body of water. A few egrets and other shorebirds also call it home. Fish jump like I’ve never seen before.

Taylor is a dog lover, which is great for so many of us who travel with our four-legged children. He opened an animal clinic on the south side of town. Regularly he hosts veterinarians who come for spay/neuter clinics. This is for the locals, but also the surrounding ranches and small towns.

With having a full size kitchen and a variety of food with me, I didn’t eat out much. But when I did, I was thoroughly satisfied. The Mulegé Brewing Company is a must stop for anyone who likes beer and pizza. In the year it has been open it has established quite a following.

An outstanding breakfast was found on the town square at Cazuelamolcajet. A series of food stalls line one side of the square, selling a variety of edibles throughout the day. More Mexicans than gringos filled the outdoor chairs each time I went by. The Mexican omelet served with beans and a drink was 120 pesos or $6. It was big enough to be my meal for the day. I just wish I had gone there sooner in my voyage so I could have tried more of their creations. 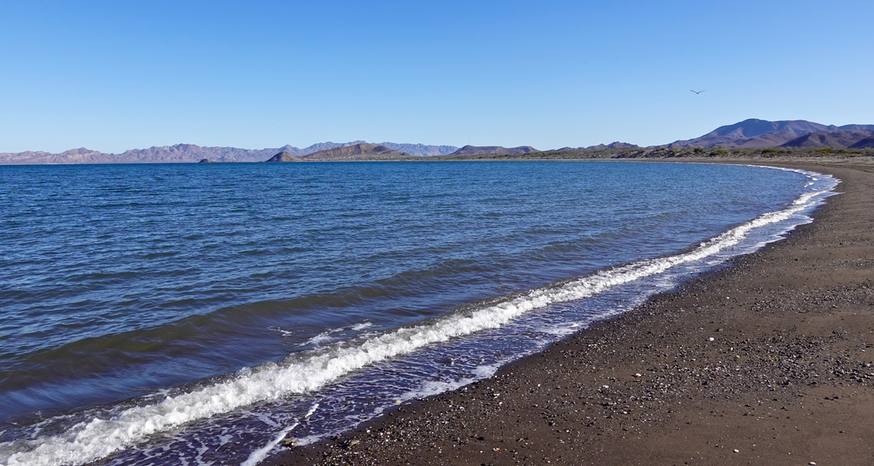 The Sea of Cortez looking south toward the point of Bahía Concepción. (Image: Kathryn Reed)

Another meal was at Racing, a definitively gringo spot along the river. A menu only in English is the first give away this is where the ex-pats go. Juan Carlos, who has been working there for about three years, said 70 percent of the restaurant’s customers are Canadians. That’s not happening this year with the U.S. not allowing people to cross the northern border because of COVID.

I would have gone back if I had had a kayak because it was directly across from where I was staying—the river separated us. Still, it was close enough to walk—which was my mode of transportation.

The fried zucchini was a recommendation from one of the guys who was on the cave painting tour. Good choice. They were cut into rounds instead of sticks, as is more the norm in the United States. The breading was light. It did not taste like they were deep fried, which was welcome. I took half the order home for the next day. I rounded out the meal with a green salad—it literally only had green vegetables. The food with two beers (one was to go) came to 270 pesos or $13.50. 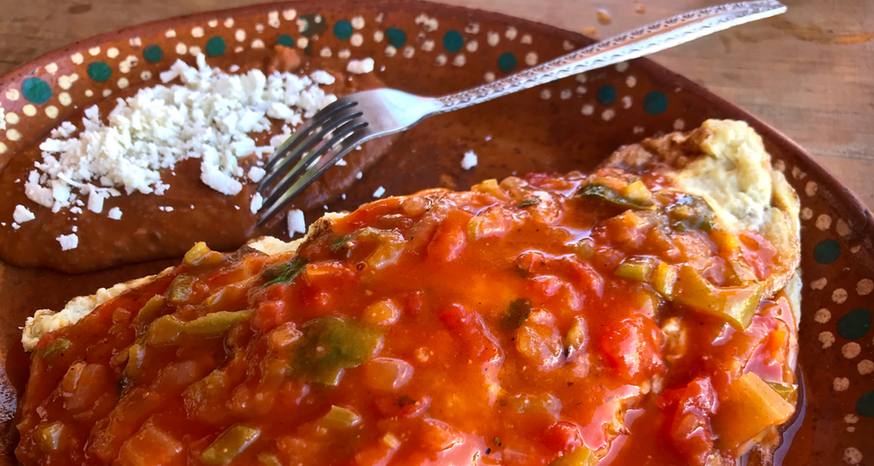 With all this eating, it was a good thing I was on foot to walk off the calories. It was a little more than a mile to town, most of which was a path along the river. I tried to get into the prison museum, but COVID has shut its doors indefinitely. This wasn’t an ordinary facility for law breakers. Most were able to keep working during the day, returning at night to sleep inside. There were no bars. The front looks more like a church, while the four corners are castle-like. Those, though, were where the guards would keep watch. Not a bad view of the town, river and desert hills beyond.

Another trek led me to the old mission that was founded in 1705 by Juan Manuel Basaldúa. Construction on the stone temple did not start until 1754, with the doors opening in 1766. Today it stands as a reminder to the past.

One excursion led me to the Sea of Cortez, which is the body of water the river empties into. The rocky, shell-filled beach was pretty, especially with no one else there. From that vantage point I could see the tip of Bahía Concepción. Having driven that stretch of Highway 1, I knew that incredible soft, sandy beaches were so close. That warm water is so clear it looks like you could drink it; or at least gargle with it since it’s salty. While the beaches beckoned, they could not be visited until my way out of town.

Fittingly, Mulegé means great sandbar of the white mouth, a name hailing from the Cochimie Indians. 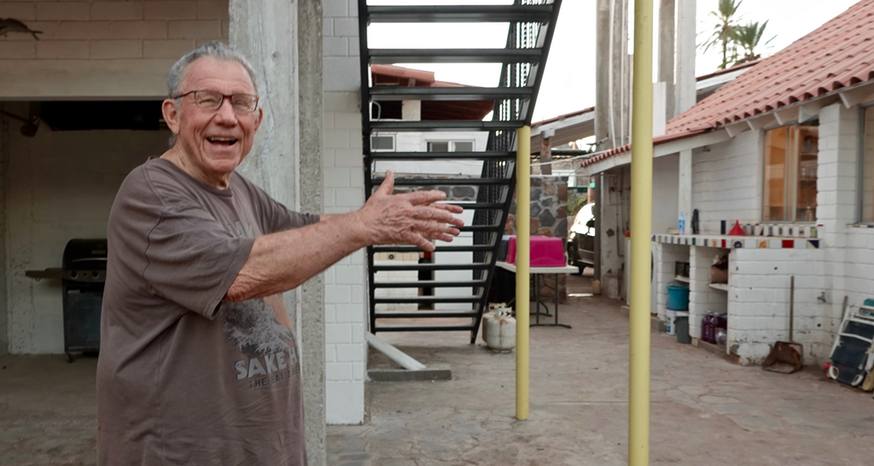 Cliff Taylor is a character who has multiple rentals along the river. (Image: Kathryn Reed)