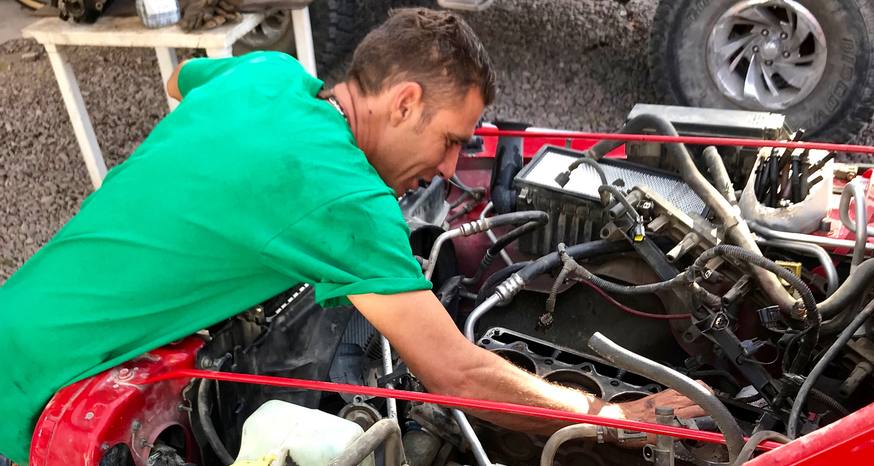 Salvador works on the Jeep at his shop in Mulegé. (Image: Kathryn Reed)

My mechanic sent me a picture of the old engine and new one. I didn’t know which was which. Maybe I wasn’t supposed to be able to tell. Maybe the point was he telling me visually that the new one had arrived and the old one was out.

That is an example of how little I know about vehicles and how I chose to do business in Mexico. I still know very little even after dealing with a broken down Jeep for more than a week. My lessons were in patience and trust.

I pulled into Mulegé on Nov. 11 with the intent of leaving the next morning for Todos Santos, my final destination. It would be about an eight-hour drive. I was so, so close and yet what seemed like a world away.

All packed up, I was ready to leave that Thursday. The Jeep said not so fast. A loud clunking sound had me turn the key off in quick order. I found the landlord of the house I was renting. Not good, he said. He had one of his young Mexican workers take a listen and look under the hood. No bueno.

Cliff, the guy renting to me, knew of two good mechanics. One came out with another guy. Nothing they could do; electrical issues were their specialty. He recommended another guy, but he could not come out until Saturday.

Clearly, I was not leaving town for at least a couple days. With the days short and as a believer in not driving at night in Mexico, I needed to stay more nights. AJ and I moved to a larger house which was up a flight of stairs. At 17, I carried her up them multiple times a day; we spent time walking along the river, and slowly we got to know the neighbors. With time to kill, I walked into town and decided to check out the local brewery. Good decision for multiple reasons.

The owner and I started talking. I shared my reason for being in town. He said one of his worker’s husband’s was a mechanic. I gave her my info and hubby was able to come out the next day. By then the car barely made any noise. It was like a whimper, a last breath. Unbeknownst to me, that is essentially what I was hearing. 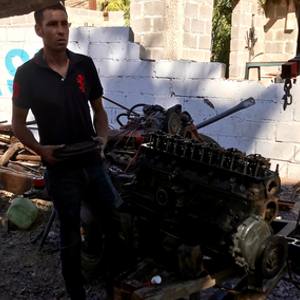 Salvador made a quick diagnosis that it must be the head gasket. I don’t know if he and the guy who was with him cared when I was telling them about the clunking noise. When I told Cliff what Salvador said, he shook his head and said he thought it was something bigger, even more serious.

I unpacked the Jeep, which was nearly full to the roof, along with the rack on the back that had more stuff as well as my bike secured to the top of it. Cliff provided me ample space in his bodega that his workers used. When I finished my job Salvador came back to haul the Jeepy away.

No tow truck like in the United States. A tow strap was secured to the underbelly of the Jeep and to the back of the tow vehicle. Salvador was in the Jeep to be able to brake and turn. It was better to only watch her go a couple hundred feet and not up the dirt hill in the housing complex, or along the highway to get to the shop.

I had no receipt for the vehicle. No proof he had it. I didn’t even know where Salvador’s shop was located.

I opened a bottle of wine that night; there was an advantage to unloading the Jeep—access to my booze. I paced myself. I needed to be able to function and make sound decisions.

Salvador was sure it was the head gasket and fuel pump. He could get the former in Santa Rosalia, the neighboring town, but would have to wait for the latter to be delivered. It was supposed to arrive that Monday. It didn’t, but I was not informed until late in the day. It had been a federal holiday, thus the reason for not arriving. I had paid him 3,600 pesos ($176.42) for parts. It’s customary in Mexico to pay for parts before the work is done. 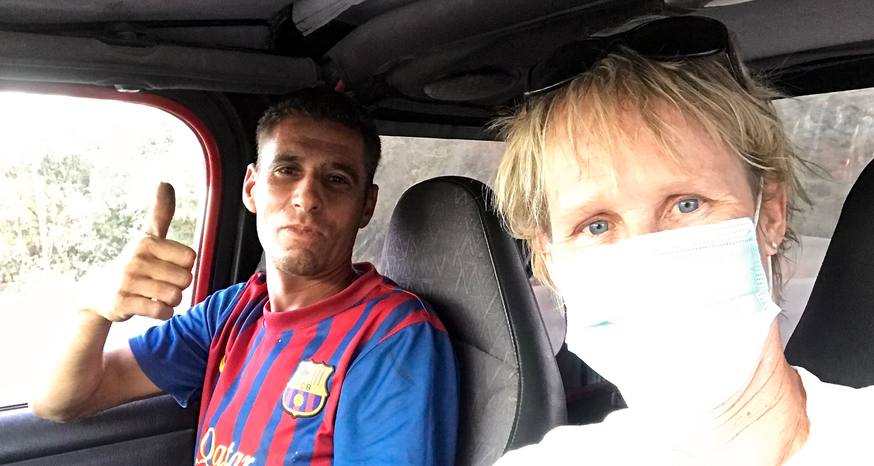 Salvador and Kathryn out on a test drive, thinking the Jeep was good and we would never see each other again. (Image: Kathryn Reed)

Since I was on foot in a small town I eventually found my Jeep without actually looking for her. She’s been so good to me. It will be 19 years in February that I bought her. In that time, I have put nearly 200,000 miles on her. This was our third trip to Baja. We have been all over California and Nevada, and parts of Oregon. She’s a great vehicle in snow as well as the perfect wheels for the beach/desert. She’s even wonderful in cities, especially for parallel parking.

Salvador, a thirtysomething-year-old with a wife and 11-year-old son, has spent most of his life in Mulegé. He started working on cars as a kid. He’s done a few other jobs, but has always come back to this for his profession. He’s earnest, proud and diligent. His smile was almost able to melt away my worries.

My patience, though, was wearing thin. I wanted to be optimistic. I wanted to have confidence in him even though Cliff, my landlord, had never heard of Salvador and had doubts. Brian, the brewery owner, said to have faith, that Salvador knew what he was doing.

One morning, Cliff drove me over to the work site. The Jeep started, but it wasn’t going to go far. I could not tell that by listening, but the guys knew it. I had to trust it wasn’t a good sound. We left the Jeep and I told Salvador to keep trying. 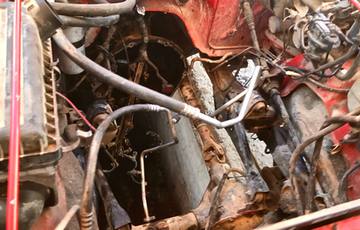 Waiting for the engine to arrive. (Image: Kathryn Reed)

Now it was a week since Salvador first saw the Jeep. He was telling me I needed a new engine. I said go for it. This meant the head gasket I paid for was a waste of money. I don’t know about the oil pump, maybe that could still be used. Remember, I’m mechanically challenged.

The engine was going to be 15,000 pesos, or about $742. I knew this was outrageously cheap compared to what I would pay in the States. What I didn’t know was if this engine from a vehicle that was in a crash had been tested in any way to know how good it was. I still don’t know. And I don’t know how many miles are on it. I just know the Jeep purrs like it hasn’t in a very long time.

When Salvador had everything apart he discovered I also needed a new clutch. Not surprising considering the original one was in it. That was another nearly $200.

Not only are parts incredibly cheap, but labor is ridiculously little in Mexico, too. Salvador wanted 7,000 pesos, or about $350—total. I gave him an extra $100. He had spent so many hours on the Jeep; even working a Sunday, which is not the norm. But he also knew he misdiagnosed the problem and that I had spent money on parts that weren’t necessary. I’d like to think we were both fair with each other.

Another problem was the bank in Mulegé only allows foreigners to take out 7,000 pesos twice a month. I didn’t have enough to pay him and still have a stash on hand in case something happened along the last leg of the trip. (A credit card was out of the question because his business was too small for that to be an option. But he had told me I would be able to pay by credit card. He thought I could transfer money to a friend’s credit card.) Cliff, the rental owner, ended up paying Salvador in a combination of dollars and pesos; the latter he had borrowed from a friend. I paid Cliff in dollars by transferring money via PayPal.

Before making the final payment Salvador had asked for 4,000 pesos. I’m not sure if he was hedging his bet in case this didn’t all work out. Maybe he needed money to pay his bills. I don’t know what other work he had in addition to the Jeep. Again, even though he said I could pay by credit card, that was not the case. I ended up sending Brian, the brewery owner, $200 by Venmo. He transferred it to his employee’s account, the wife of Salvador. Salvador would have to deal with her to get his money.

Salvador promised if something happened the next day when I was driving that he would come to my rescue.

That Monday I found myself on the side of the road. I could tell it was the battery this time. (Something I had replaced two years ago when I first got to Todos Santos.) Luckily, the owner of the place I stopped at gave me the WiFi code, so I could get a hold of my mecánico. This is what I had feared—being in the middle in nowhere (which much of Baja is) with no way to contact someone. I am glad I turned around when I did in an attempt to limp back into Mulegé.I barely glided into Buenaventura, which is not too far south of Mulegé. The lovely beach was perfect for chilling as I waited for Salvador and his half-brother Daniel.

Problem easily resolved—the connector for the alternator was not securely in place.

Salvador called me along the way to see how I was doing. I was on the outskirts of La Paz at that point. Once I arrived in Todos Santos he was one of the first people I messaged. His honesty and integrity, and eventual ability to solve the problem would have me go back to him if need be.

I’d like to say the rest of the drive was a breeze, but it was stressful in other ways that involved driving off the road to avoid hitting a vehicle without brake lights, being chased down by a carload of four Mexicans blaming me for them being rear-ended, and the national guard getting involved.

Then there was the start of the trip in Tahoe that involved a flat tire. Dude said he found a nail in a tire that wasn’t flat but could not find the problem with the bad tire. It took a Mexican in San Quintín to easily figure it out. Cost was $3; I gave him $5.

I finally arrived at my winter home on Nov. 23, two weeks after starting out from South Lake Tahoe, California. My friends Jill and Robert were waiting for me with wine and dinner.

The trip was so worth it.